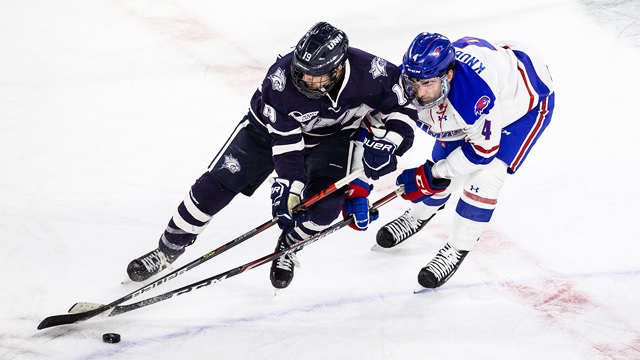 After an uneventful first period, the Wildcats endured a downward spiral in the second period sparked by a five-minute major on their captain, senior defenseman Anthony Wyse.

The referees penalized Wyse after a crushing hit to the head of UML’s first-year wing Blake Wells. The game misconduct penalty got Wyse ejected from the contest.

UNH head coach Mike Souza spoke on the aftermath of the major. “You lose your captain, which sometimes can by a rally cry. I thought our guys did a good job killing it off. One goal, it is what it is,” he said. “Just disappointed we weren’t able to get two points or at least a point out of this game.”

Soon after, sophomore wing Sam Knoblauch scored his second goal of the series on the power play. Knoblauch ripped a slap shot off a rebound when UNH goalie Mike Robinson was twisted out of position, leaving the glove side of the net wide open. He was assisted by sophomore defenseman Chase Blackmun and first-year wing Marek Korencik.

River Hawks head coach Norm Bazin commented on the momentum after the penalty. “It might deflate an opponent energy-wise, so from that perspective we didn’t get as much as we thought we could get out of it,” he said. “When you score one in a tight game, it’s an advantage.”

Play was becoming more and more chippy as the night went on, eventually resulting in a 4-on-4 when junior defenseman Eric MacAdams and UML first year forward Blake Wells each got called for hitting after the whistle.

The Wildcats capitalized with sophomore wing Angus Crookshank netting his team-leading 14th goal of the season. The goal injected a shot of energy into an otherwise lethargic Whittemore Center, although the River Hawks stifled the brief celebration with a goal from junior defenseman Anthony Baxter.

Patrick Grasso followed that with a power play goal where he somehow scored while diving toward the stick side of the net.

Souza acknowledged costliness of inopportune penalties over the weekend. “There’s no way for me to talk around it. You can’t take a penalty in that situation. It’s that simple… We don’t find ourselves penalized all that often, but it seems like when we take them they’re not at great times during the game.”

That was it for the goal scoring, resulting in UMass Lowell getting a win. Yet, UNH benefited from previously winless UVM sweeping Northeastern over the weekend, putting the Wildcats within one point of the eight seed.

The Wildcats continue play with a home and home series against No. 4 Boston College, who is currently atop the Hockey East. The ‘Cats will be in Chestnut Hill, Mass. Friday then at home Saturday for senior night. Puck drop is set for 7 p.m. both nights.