Fairfield edges out UNH in Durham 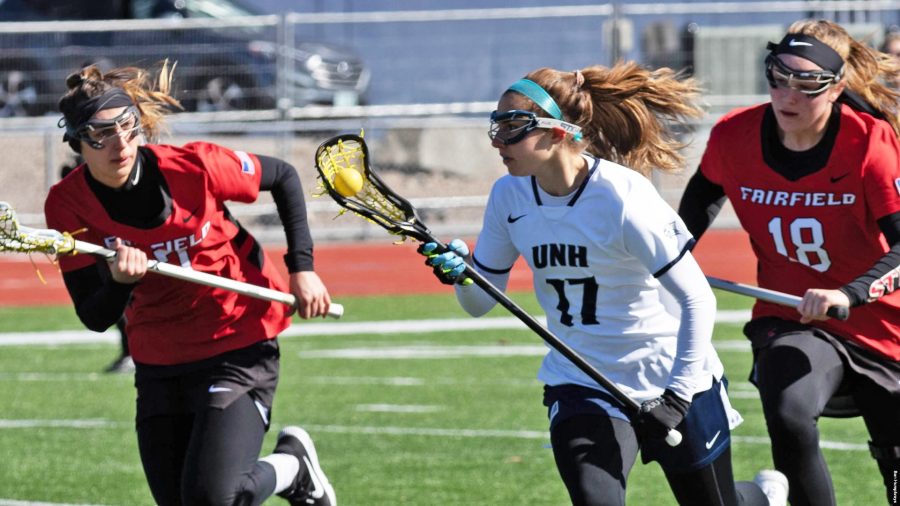 The UNH women’s lacrosse team (1-3) capped off yet another loss at home against Fairfield (2-4) Sunday evening. Junior midfielder Elizabeth Blanding’s monster performance of four goals wasn’t enough to beat the Stags in a hard-fought battle in Durham. To start the game off, Blanding drove down the right side of the fan at 25:34 and ripped a shot on goal to put the ‘Cats up. Netting her first goal of the season, junior attacker Sabrina Grovom scored 46 seconds later to give UNH a strong start to the game. The Stags managed to stop this streak quickly, followed with a goal from Fairfield’s graduate attacker Monika Sivilli 35 seconds later at 24:13 to put the game 2-1. Senior midfielder Caroline Hernon reestablished UNH’s two-point lead with a snipe on goal at 19:00. This lead was cut short however due to six unanswered goals from the Stags to create a 7-3 lead for Fairfield at half. Able to score back-to-back goals within 31 seconds, Fairfield’s junior midfielder Diana DeVita tied the game at 12:54. Continuing their hot streak, Sivilli broke the tie at 7:02 to uplift the Stags 4-3. She continued to score her third goal of the half, putting Fairfield up 5-3 at 3:35. To close out the first-half scoring, Stag’s sophomore attacker Cameryn Dera struck again with 43 seconds left on the clock.

To start off the second half, the Stags continued their goal streak to seven following a pass from first year attacker Elizabeth Rowe to first year midfielder Maggie Fort to give the visitors an 8-3 lead at 26:13. UNH first year attacker Katie Taranto managed to find Blanding across the middle to stop the Stags hot streak and lift UNH within 8-4. Fairfield’s junior midfielder Jillian Winwood put the Stags ahead by five goals once again at 20:42. Netting her first goal of the season, Wildcats first year midfielder Ava Schroeder charged towards the crease and blasted a shot on goal at 19:42, making it a four-point differential. It wasn’t enough to cool down Fairfield, with goals at 18:24 and 16:46 to extend the lead to 11-5. Trying to brew up a comeback, sophomore midfielder Emily Curtis scored on a free position from the right side at 16:06 to cut the deficit to five points. With the fire hands, Blanding netted her third goal of the game on a free position at 15:11 to trim Fairfield’s advantage to 11-7. Shortly after, the Stags managed to score adjacent goals 44 seconds apart to take a 13-7 lead at 10:38. Junior midfielder Julia Neyland made a reverse pivot on the right side of the fan, scoring right after at 9:30. Snipping her fourth goal of the game, Blanding used a stutter-step at the top of the fan to get off the defender to put UNH at a four point deficit. The Stags didn’t allow UNH to comeback, scoring another two goals to close out the game in Durham to finalize the score at 15-9. The Cats (1-3) next game is against Dartmouth College (3-0) in Hanover, N.H on Saturday at 1 P.M.