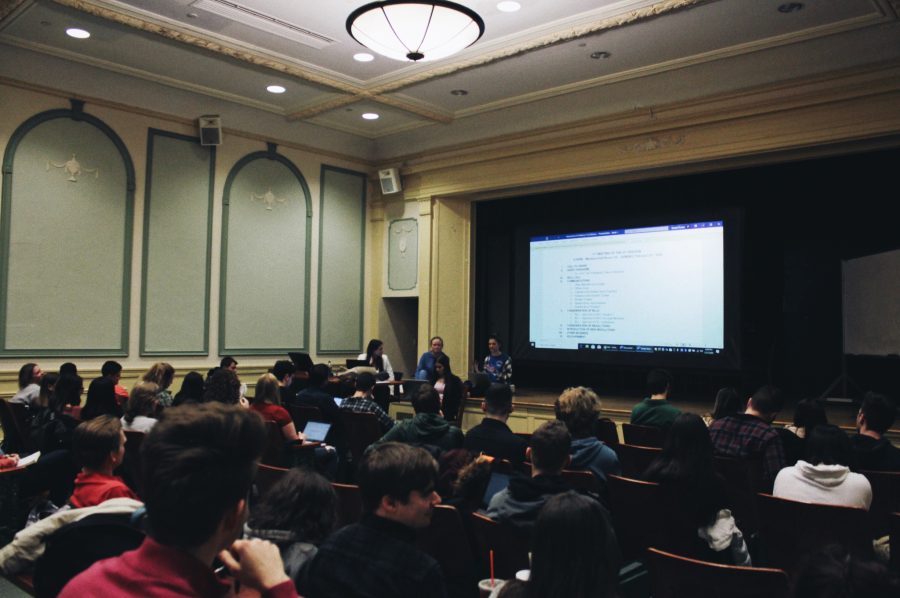 University of New Hampshire (UNH) Dean of Students John T. Kirkpatrick spoke with members of the Student Senate body on Sunday, Feb. 23 in their first meeting since Dec. 2019, discussing how best to move forward after the public release of the Executive Inquiry Summary. The report disclosed claims of a “toxic” environment, leadership position “grooming” and an environment of discrimination against female members of the governance body.

On Tuesday, Feb. 25, Kirkpatrick asked Student Body President Allie MacPhee to appoint Devon Guyer, a senior environmental conservation and sustainability and justice studies dual major, to serve as Senate Speaker until May 1. Guyer replaces former Speaker Nick LaCourse, who resigned nearly three weeks ago along with former Parliamentarian David Cerullo. The next Parliamentarian will be chosen in the coming weeks by a more “democratic” process, according to Senate leadership, as opposed to being selected by the Speaker, per the bylaws.

After the body passed a motion to suspend Robert’s Rules and regular parliamentary procedure, Kirkpatrick began to outline his plan to help Student Senate move forward from the issues surrounding the climate. The body being joined by University System of New Hampshire (USNH) Special Counsel Tracy Birmingham to discuss Title IX standard practices at the next meeting on Sunday, March 1. On Sunday, March 8, Student Senate will have a discussion on inclusion and diversity and on Sunday, March 22, they will be joined by an “outside speaker.” The body won’t meet on Sunday, March 15 due to the university’s spring break period.

Throughout the course of next month, Kirkpatrick will work with Student Senate leadership to draft and ratify the first Student Senate code of ethics along with the help of political science professors Susan Siggelakis and Dante Scala and justice studies professor Charlie Putnam.

According to Kirkpatrick, the code of ethics is aimed to promote “civil and responsible” engagement amongst members of Student Senate without any “impropriety.”

“I think it’s an important moment for all of you to look at that and say, ‘Here’s what we’re about, and here’s how we comport ourselves,’” Kirkpatrick said. “And that when there is a violation of that code of ethics that there’s a structural way to deal with that. It’s even-handed and fair and provides some fair process for the person that’s accused. But if there’s an egregious breach of that ethical code, the Student Senate needs to take action.”

Additionally, professors Putnam, Scala and Siggelakis will be helping Senate to go over their bylaws to review if they are “missing anything” or if they are “designed to disempower some segments of the student population.”

Following Kirkpatrick’s remarks, Student Trustee Cailee Griffin thanked Senate members for participating in the university’s investigation and expressed her excitement for the body to be back in session.

“We may not have been the generation to start this… but we can choose to be the generation who ends it at UNH,” she said regarding the findings of the investigation.

Shortly thereafter, Student Body President Allie MacPhee and Student Body Vice President Kelsey Crowley began the nomination process for the open Speaker position. Out of 18 nominations, nine accepted or self-nominated and the body decided that Speaker presentations for candidates would be limited to five minutes each at the following week’s meeting.

However, in a meeting with The New Hampshire on Tuesday, Feb. 25, Kirkpatrick stated that he was “concerned” that informal business occurred upon his exit from the meeting.

“We need to reset- in the spring of 2020- how this thing works,” Kirkpatrick said, adding an analogy that “we have to get the house in order” before “moving in.”

At the conclusion of Sunday’s Senate meeting, Guyer spoke of her reasoning for accepting the nomination to run along with the eight other Speaker candidates.

“I’m really interested in being a part of revitalizing the Senate and whether or not I win I will be a part of that just because I love this institution and what it has offered to the university,” she said.

In his meeting with The New Hampshire, Kirkpatrick stated that his selection of Guyer is based off of her involvement and experience within Senate over the last few years.

“Who would be best positioned relative to the students? Devon was the person who lost to the Speaker this year,” Kirkpatrick said. “…so, for the next two and a half months she’ll be the Speaker pro tem.”

In an email sent out on Tuesday, Feb. 25 to Student Senate leadership, professors Putnam, Scala and Siggelakis and members of The New Hampshire, Kirkpatrick spoke of his appointment of Guyer and of his reaction to Senate business resuming.

“If I may, the Student Senate has considerable challenges to face, ones of its own making. It must restore the confidence of the student body and wider University community in its structure, procedures, and culture. At present, to be frank, the Student Senate is in a compromised state of affairs. Much work needs to be done in the weeks ahead. I hope to work collaboratively with the leadership and Student Senate to establish a new beginning for 2020-21 and beyond.  The study body deserves an equitable, transparent, and inclusive legislative body. Please take this as direct counsel to the Student Senate as a part of the shared governance system at UNH,” he wrote.