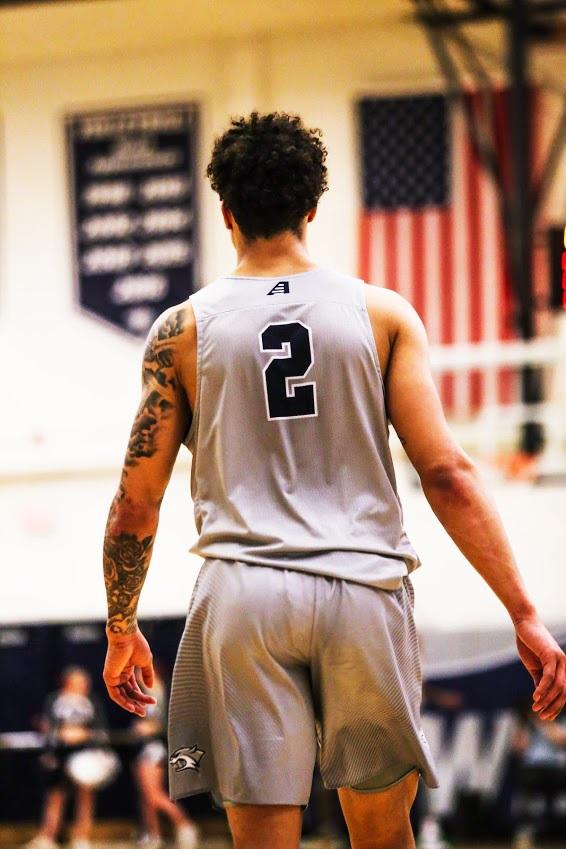 UNH men’s basketball donned their alternate grey uniforms for the second time this season when they welcomed the Hartford Hawks into Lundholm. The Wildcats needed all 40 minutes to sneak into overtime and pull off the upset.

Senior point guard Mark Carbone dropped a career-high 22 points off the bench and stepped up big when his team needed him. The guard shot three-for-seven from downtown and nine of 10 from the free throw line.

While head coach Bill Herrion was impressed with his senior’s career-high, he was even more impressed with the fact that he only recorded one turnover in 31 minutes.

UNH jumped out to a quick lead but it wasn’t long before the offense stalled. Hartford stormed back to gain a 12-point advantage with 9:33 to play in the first half.

The ‘Cats have struggled to put points on the board early in games as of late, but they never feel like they’re out of the game with the defensive mindset that Herrion has instilled in them.

“I don’t know why we always do it to ourselves,” Carbone joked. “We never really quit. Our defense is so solid, we know if we can string together three, four, five stops in a row, and we start hitting shots, it’s a whole new ball game.”

A 13-0 run by the Wildcats quickly catapulted them back into the lead. The run was manufactured by five straight baskets from sophomore Jayden Martinez, junior Sean Sutherlin, junior Josh Hopkins, Carbone and sophomore Meekness Payne.

The Hawks regained a two-point lead before heading into the locker room.

Hartford held the lead for the first six minutes of the second half, but UNH kept them at arms-length. A pair of threes from sophomore Marque Maultsby and Carbone put their squad ahead by four.

The two sides traded the lead for the remainder of the half. The Wildcats were down by three heading into the final minute of regulation, but a clutch 3-pointer from Sutherlin knotted the game at 51 points apiece.

A free throw from graduate student Malik Ellison gave Hartford their biggest lead of the overtime period extending the score to 57-53. It was all UNH from that point on, however.

The Wildcats ended the game on a 14-6 run to win by a final of 67-63; avoiding what would’ve been their third straight loss.

“We really haven’t gone on any losing streaks … last year we struggled, and that whole year was just a horrible feeling, and we never want to get back to that point. As a team we knew it was a big game and we knew we needed to win,” added Carbone

Junior guard Sean Sutherlin came alive late for the Wildcats recording his eighth double-double on the season with 13 points and 17 rebounds.

Ellison paced the Hawks in scoring with 28 points while also pulling down 13 rebounds.