Storey gets 1,000th point in loss to UMaine 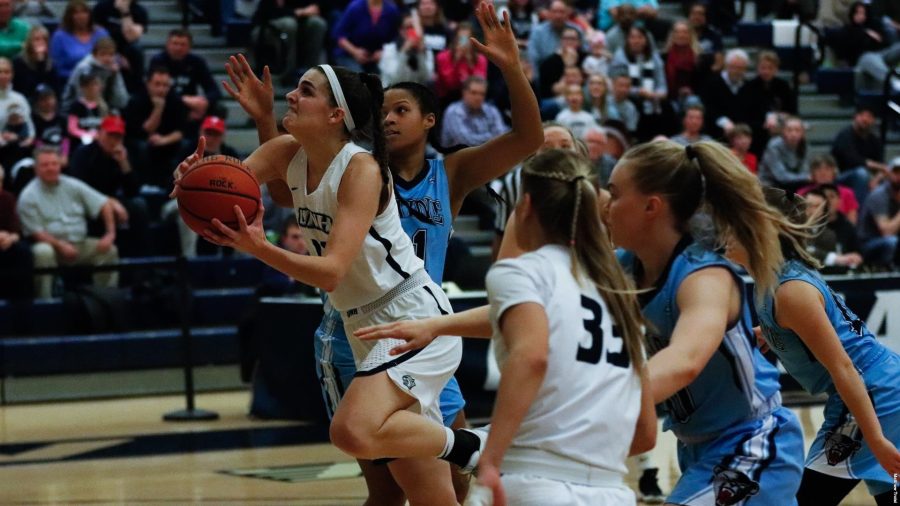 UNH looked to continue their three-game winning streak this past Wednesday night when they took on the UMaine Black Bears (15-14, 11-4) in “The Border Battle” at Lundholm Gymnasium.

Senior forward Ashley Storey was the star of the night as her 23-point performance gave her 1,000 for her career. However, in the moment, Storey was not fazed by the achievement.

“Obviously it’s a milestone that is exciting for any athlete that hits it, but in the moment of the game we were losing and…we needed to keep going…I was telling everyone that we have a game to finish.”

Torres exuded admiration for Storey after the game as both a teammate and leader.

“It has been great playing with Ashley. She’s personally helped me with my confidence so much. She’s the first one to yell at me in a good way and telling me to be more aggressive and shoot. She’s probably just as hard on me as coach (Magarity) is.”

However, the Black Bears spoiled Storey’s special night as they defeated UNH by a score of 71-62.

The ‘Cats controlled play for the opening six minutes, and they built a 17-11 lead on the backs of Storey, Ahearn and their defense.

What stopped UNH from pushing out their lead even further was an offensive outburst from UMaine standout junior guard Dor Saar. She was held in check by Torres for the first few minutes of the first quarter, but once Torres went to the bench Saar beat her matchups with ease.

Magarity thought this was a key point in the game for the ‘Cats. “(Torres) getting into foul trouble really hurt us because we had to sit her and then push her off Saar and put different people on to her…she’s such a smart player and she knew who she had guarding her.”

The third quarter started out as the Torres show. She had a steal and breakaway layup in the first minute and backed it up with another layup on the next possession to give UNH the 34-33 lead.

Storey and first year guard Helena Delaruelle went on to contribute six and four points respectively, but UMaine first-year guard Anne Simon and company matched their production, putting up 17 points in the quarter. This gave the Black Bears a 50-46 advantage heading into the final frame.

The highly anticipated fourth quarter was uneventful until UMaine junior guard Kelly Fogarty swished a three with seven minutes left. She finished with nine points, all off three pointers.

The remainder of the last quarter featured an offensive clinic from Storey and Black Bear junior forward Maeve Carroll. They traded buckets on multiple possessions down the stretch, but Storey’s effort wasn’t enough to propel her team to victory.

UNH was forced to foul on their last four defensive possessions and the Black Bears converted on all eight of their free throws. Storey hit a three to cut the lead to 68-62 with 28 seconds left, but UMaine went on to secure their nine-point win.

The Wildcats will be back in action this Saturday, Feb. 29, when they travel to Vestal, NY to play Binghamton in their final regular season game.