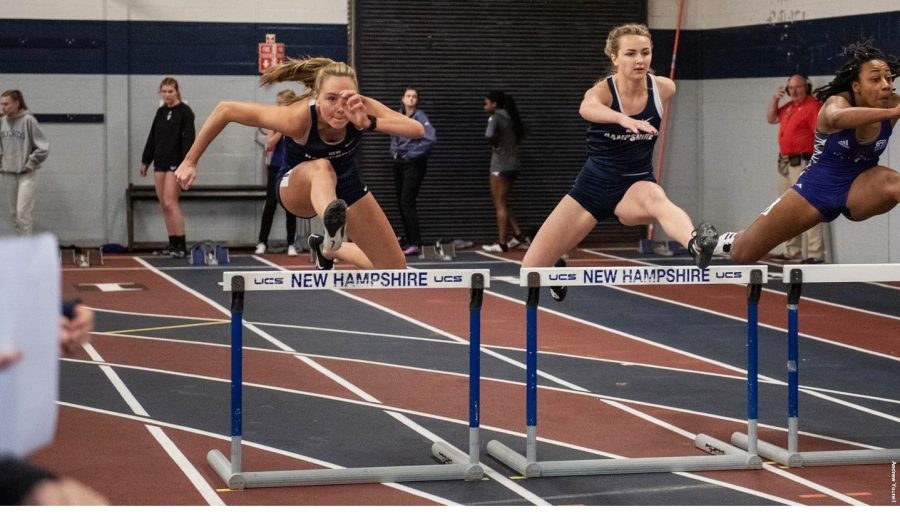 This past weekend the America East Indoor Track Championships took place at Boston University. The men’s and women’s teams both ended the two-day meet with top-four finishes, the men taking third with 100.5 points and the women taking fourth also with 100.5 points.

This will come as news to absolutely nobody that senior thrower Zach Astle swept both throwing events yet again, all while setting a new personal best in the shot put with a throw travelling 57’1.5”. On top of those two wins, Astle was able to bring home some more hardware winning the America East Indoor Most Outstanding Field Athlete for the second year in a row. Astle can now call himself a five-time America East Champion as he has established himself even further as the America East’s best thrower.

“Overall the team did well, I mean we were third, that’s good within the league” said men’s head coach Jim Boulanger about his team’s performance. “The rule of thumb is to hit your seed time, and if you do that usually you’ll score… we had some kids who didn’t score where they should have.”

While Astle is a huge part of this team, his two wins could only count for 20 out of the 100.5 points that the team scored overall. Other notable performances came from the 4×800-meter grouping of sophomore Ian Daly, senior Samuel Lanternier, sophomore Spenser Sawyer, and senior Matthew Adams who finished in second place with a time of 7:38.50 earning UNH eight points.

While Boulanger mentioned that his team had some members not score where they should have, there are also athletes that may score unexpectedly “like in the weight throw with senior Kyle Faucher who picked up eighth” which Boulanger mentioned was “totally unexpected, but in track every point counts.”

The women’s team also had a great performance this past weekend finishing in fourth out of nine teams with a score of 100.5. Graduate student Shannon Murdock led the way for the Wildcats winning her sixth America East championship, this time taking first place in the 5000-meter with a time of 16:49.55. She followed up that performance on day two with a runner-up finish in the mile with a time of 4:53.3. Murdock’s performance at the AE Championships earned her the Service Credit Union Student Athlete Spotlight of the Week Award.

Senior Meg Champagne was another UNH runner who showed out on day two winning her first America East Championship in the 3000-meter run with a time of 9:38.69. Seniors Elisabeth Danis and Eve Glasergreen also scored in this event with times of 9:50.65 and 9:57.72 respectively.

Two weekends from now the Wildcats track and field teams will head back down to Boston University for the ECAC/IC4A Championships which will take place on Saturday, March 7.