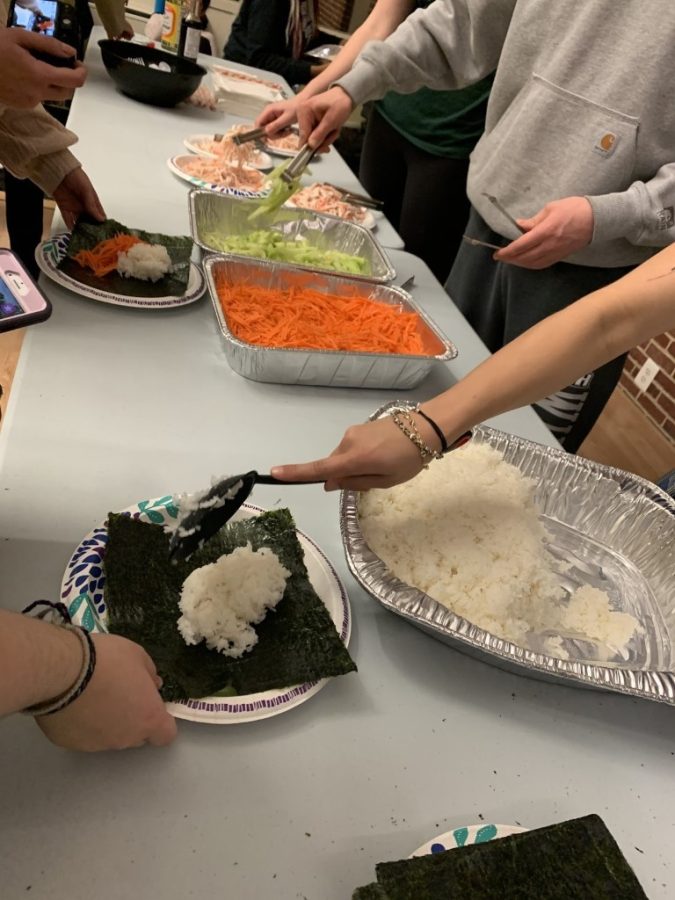 Two student organizations came together this week to make the community more inclusive and promote different cultures around campus. On Wednesday, Feb. 26, the United Asian Coalition and Hillel hosted Kosher Sushi Night in Union Court where students could learn more about what kosher means and make their own sushi rolls.

This is an annual event that the two organizations hold and encourage students to come enjoy an interactive and educational night for free.

The United Asian Coalition (UAC), is a group on campus that promotes diversity, equity and inclusion and works to educate UNH students about Asian, Asian American and Pacific Islander cultures. The organization hosts discussions on social justice topics along with organizing large scale events around campus such as the Lunar New Year celebration, East Meets West and of course the Kosher Sushi Night.

The Hillel is another student organization that also works towards making our campus a more inclusive environment specifically for Jewish students and students interested in Jewish culture. The organization encourages their students to participate in community service projects and social events.

During the event students formed two separate lines to create their own sushi roll. The first line was to choose your filling ingredients. There was white rice, carrots, cucumbers and imitation crab along with sesame seeds and soy sauce. After gathering their fillings, the students got in the second line to roll their sushi. They used a bamboo sushi rolling mat and seaweed to create their rolls.

Genetics major Allegra Schejtman, a sophomore in Hillel, explained that kosher means that the food complies with the dietary standards of traditional Jewish law. Seafood that is considered to be kosher has to have fins and removable scales – hence the imitation crab. Schejtman also explained how some Jewish people are stricter than others, “you are not supposed to eat meat and drink milk together…some people will go to the extreme were they literally have two separate kitchens and two different sets of everything so one will be used for cooking meat and one for milk.”

First-year chemical engineering major Adam Spencer came to the event because “I heard sushi was going to be here.” When Spencer was asked why he believes it is important for minority groups to hold collaborative events he said, “it gives a different perspective to the students around campus.” He also explained you don’t normally get to eat sushi unless you go out and find it yourself.

Sophomore Andy Young, a business major and in UAC also explained the importance of minority groups collaborating on campus, “we need to make sure the minority groups also matter.”

The students all agreed that inclusivity around campus is important and that collaborating with different organizations helps build and promote a more diverse and inclusive community around campus.