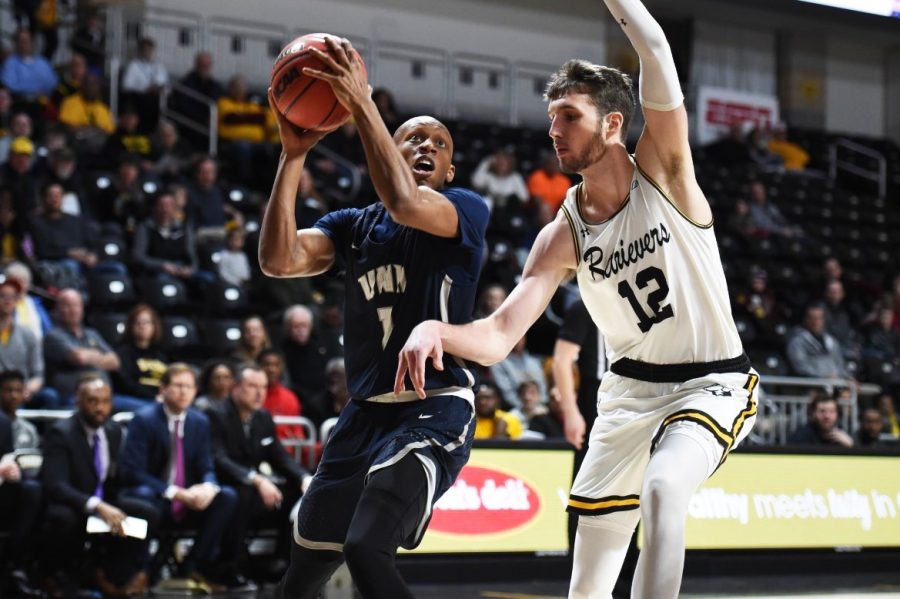 The UNH men’s basketball suffered their second straight loss when they traveled to UMBC for a date with the Retrievers. The Wildcats now sit with an 11-13 record before heading into their final five games of the regular season. The 59-65 loss also dropped UNH to just 4-7 within the conference.

The Wildcats got out ahead early, keeping UMBC at arms-length for the first seven minutes of action. Sophomore forward Nick Guadarrama and junior guard Sean Sutherlin combined to score eight of the team’s first 10 points, helping their side gain a five-point edge.

UMBC knotted the score at 10 points soon after, and both teams would struggle to gain leverage for the next few minutes.

About midway through the first half, UMBC took control of the game. The Retrievers ran their lead up to 13 going into halftime after going on a 21-9 run to close out the final 12 minutes.

Early in the second half, Retriever senior guard K.J. Jackson sunk four straight free throws to put his squad ahead by 15 – the biggest lead of the game for UMBC.

Jackson paced the Retrievers in the win, finishing with 19 points and seven rebounds.

UNH slowly began to chip away at the lead, scoring from all different areas of the floor. It was a Marque Maultsby three-pointer that brought UNH within two points in the final stages of the game.

That was as close as the Wildcats would come, however, as a handful of missed shots handcuffed the team late in the contest. Jackson was able to stretch the lead back to eight points for UMBC with under three minutes to play.

UNH attempted a late scoring rally, but three pointers from Maultsby and junior guard Josh Hopkins would prove to be insufficient as the Wildcats fell by a final score of 59-65.

Despite the loss, UNH kept UMBC below their season average of 68.3 points per game. Defense has been an emphasis of head coach Bill Herrion all season long after a disappointing 2018-2019 campaign.

Maultsby led the way for UNH despite falling to yet another America East rival. The sophomore tallied 15 points on 29 percent shooting. He led the team with 40 minutes and three triples. He also added six rebounds in the contest.

Herrion has noted how well Maultsby has been playing, despite not getting the attention that players like Guadarrama or Sutherlin might get.

“I think what’s going under the radar here a little bit is how good Marque Maultsby is playing. He’s really playing well.”

UNH will be back at home on Thursday, Feb. 20 to welcome the Hartford Hawks. This will be the first of their final five regular season games.