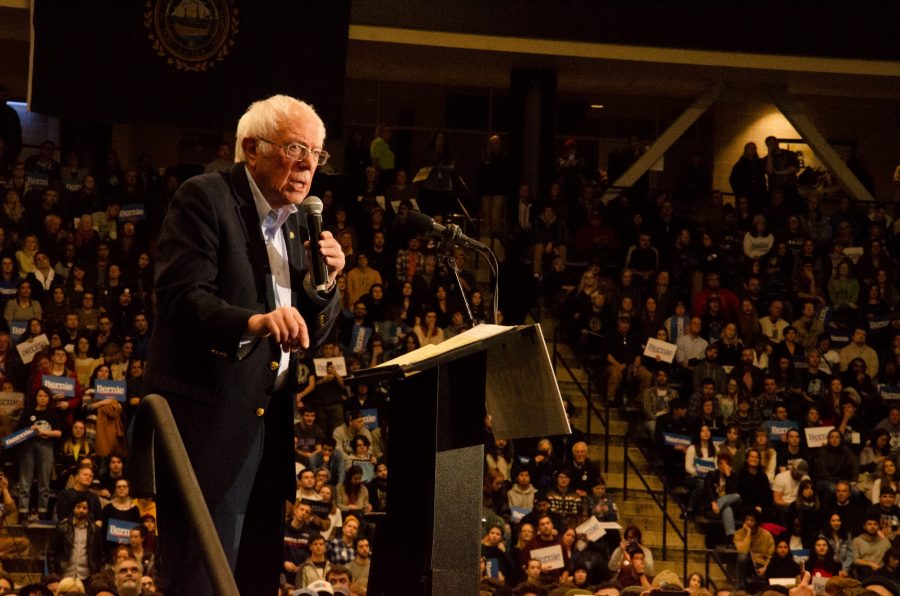 For students approaching the Memorial Union Building’s (MUB) circular driveway at 5:00 p.m. on Tuesday, Feb. 11, to begin their journey from the University of New Hampshire (UNH) to the voting booth, they found themselves greeted by a seemingly familiar voice.

“We are here today to make sure that the young people of New Hampshire come together in the interest of common sense reform,” the voice, eerily resembling that of Vermont Sen. Bernie Sanders, cried from atop the MUB’s circular driveway; “there are free van rides to the polling places, and we are making sure that the young people get on those free van rides so that they can have free healthcare and free college tuition for all.”

Upon closer inspection, however, the man behind the curtain is no senator, but rather a comedian named James Adomian, best known for his Sanders impressions on series like “Bernie vs. Trump” and other impressions, most notably his work as George W. Bush on “The Late Late Show with Craig Ferguson” until 2009.

“We’ve been doing comedy shows in Manchester, so this was my day off and I thought I come down here and help get out the vote,” he told The New Hampshire.

Surrounded by UNH students and poking fun of the popular socialist candidate with a “loving angle,” Adomian’s presence at UNH during the state’s “first-in-the-nation” primary proved just how much stock UNH placed in its student vote in the dynamic 2020 election, a commitment so great that even funnymen took it seriously.

After cramming into volunteer vans – which ran from 7:00 a.m. to 7:00 p.m. – and trekking through moderate traffic toward the packed Oyster River High School, those same students reached their destination, fueled by emotions ranging from excited confidence to anxious nervousness. Their personal ceaselessness contrasted with the orderly and structured procedure laid out by Durham town officials, who divvied up incomers into pre-registered voters headed straight for the gymnasium – home to the main attraction – and other lines leading to a performance room where visitors could register that night if need be before headed back toward the gym.

Overseeing the voting itself was moderator Christopher Regan, an attorney who was tasked with overseeing the vote and leading the setup process beforehand. Regan, who has been moderating elections like this since 2006, expressed a positive outlook as he scanned the room’s bustling activity.

“Turnout tonight is probably about the same as 2016, which is higher for a primary, but we were expecting [that] there might even be a larger bump based on a couple of the past elections and we’re not seeing it so far,” he said.

According to the New York Times, 1,660 voters out of approximately 4,144 reported Durham electorates cast their ballot for the eventual winner of the Granite State, Sen. Sanders; meanwhile, 1,119 voters backed former South Bend, I.N., Mayor Pete Buttigieg, 754 voters clung to Sen. Amy Klobuchar (D-MN) and 611 others went with Sen. Elizabeth Warren (D-MA) to round out the top four candidates.

In the eyes of Regan, the motivations to vote come down to just how tense and vigorous the race remains, especially after last week’s chaotic Iowa Caucuses that have yet to confirm a true victor.

“Some people are just coming through because they’re doing it, but I think a lot of people are excited about voting,” he said, even as he iterated that he did not “find anything unusual about this election either plus or minus.”

While the student vote told a major part of Tuesday’s story, they did not tell the whole story. Assistant moderator Tom Richardson, who also served as a door greet and directing pre-registered voters to the gymnasium, explained to The New Hampshire that most voters in Durham are “always” year-round residents; while the town uses same-day registration numbers as an approximate “reflection” of the student vote, he said it ultimately accounts for a third of total turnout.

“Most of the same-day registration people are, of course, university students; we also get folks who have just moved into town,” Richardson said. “This year, we have many more older folks that have moved in because of the large new Riverwoods elderly housing complex, which has brought several hundred older folks into town in the last three months, and they’re all registering to vote.”

Many UNH students taking part expressed similar sentiments after the fact. Richard Randall, a junior mechanical engineering major, voted in the 2018 mid-terms and local elections prior to the 2020 national election and cast his ballot for entrepreneur Andrew Yang.

“He’s what I envision a leader should look like and should act like for our country,” Randall said. “A lot of his stuff I grew with, like the UBI [Universal Basic Income] and legalization of various substances and how we should approach the economy and stuff.”

Yang dropped out of the race on Wednesday after failing to break three percent of the vote or win any delegates.

Accompanied by two UNH friends, Randall stressed the importance of student participation, saying that one does not have to vote, “but it’s really cool if you do vote because then your voice is heard…”

Other students, meanwhile, articulated uncertainty when it came to their ballots and their political affiliations; in the case of junior business administration major Chrissy Knox, a registered independent, she was torn between not just the plethora of democrats but also their bane of existence, President Donald Trump, who she voted for in 2016.

“I think [this vote] is slightly more important; I don’t think it’s any less controversial,” Knox said. “I think it’s extremely hard to vote with the political atmosphere that there is; I think it’s extremely divided…I think people are probably more judgmental towards who your voting for than probably ever in history, so I find it hard to be open about who you want because there’s a lot of judgment from the other side.”

Knox’s conflict stemmed from her pro-environmental stance as well as her previous support for the incumbent, which led her to be torn between Trump and Sen. Klobuchar.

“I like Amy because she’s a woman and she’s a little moderate; she’s not like too democratic and I like that she cares about the environment a lot,” she said. “That’s kind of my main thing with Trump: I like Trump, but I don’t like how he is not for the environment and kind of took away those [protections].”

While Knox described her 2016 vote for Trump over Hillary Clinton as “not as hard a decision,” her position this year as an independent, as opposed to her previous affiliation as a Republican, put her in tougher position because she wanted to back pro-environmental candidates like Klobuchar but also back Trump in order to take on a potential Sanders or Warren ticket. She ultimately voted for Trump – who won the state with 83 percent of the vote – but expressed a long-term concern that public support for the president on campus would lead students like her to be pressured to back “all these other beliefs that I don’t even believe in.”

Despite the increased politicization and emphasis on 2020 compared to previous years, Regan expressed confidence that the Durham vote, as well as the overall New Hampshire primary, would deliver a sound result – the first of a to-be-long 2020 race – relieve confused voters in future contests, and allow the voices of students and residents alike to be heard.

“I think New Hampshire, given that it has been doing this for [100 years] right now and became real important in 1952, we’ve been doing this for a long time, and we’ve been doing a pretty good job during that period of time,” Regan said. “The people…who we pick for the presidential candidates very often end up being the people who are the eventual nominees; we do a pretty good job of taking a big number of people and distilling them down to a much fewer number of people, who then continue competing through until they get to the convention.”