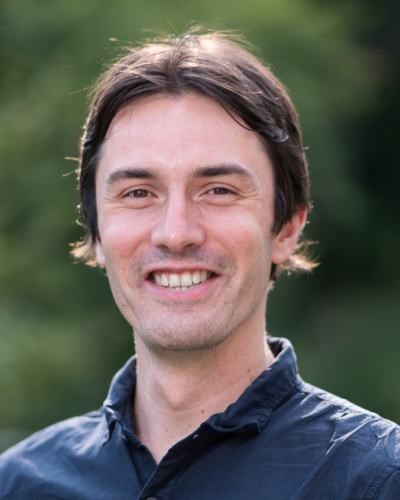 In late summer 2019, Dr. Francois Foucart, an assistant professor in the Department of Physics and Astronomy within the College of Engineering and Physical Sciences, received a $750,000 grant from the U.S. Department of Energy (DOE) Office of Science, as part of the DOE’s Early Career Research Program. The program is for, according to the DOE’s website, scientists not long into their academic careers, restricting applicants to those who have had a Ph.D. for less than a decade. Foucart received his Ph.D. in 2011 from Cornell University.

Scientists of any discipline can apply for these grants, from biologists to nuclear physicists like Foucart. One of these grants has not been awarded to a UNH researcher since 2015, when Dr. Patricia Solvignon, then in the Department of Physics and Astronomy, received such an award. Solvignon died in 2016.

Earning an Early Career Grant is a multi-step process, as Foucart described. While grant applications and reviews tend to take many months in academia, this grant included a pre-application component. The pre-application is limited to three pages, and Foucart explained that it was a synthesis of the project he intended to complete, along with the project purpose.

Also, unlike other grants, where multiple researchers can be listed as leads of the grant, or co-primary investigators, the DOE allows only one person to be the primary investigator. Other researchers, students, and colleagues, can be listed on the grant, just not as the lead. Foucart is going to work with collaborators from a variety of institutions including Washington State University and an institution in Germany. These collaborators will bring respective strengths, allowing everyone to work on the part of the project they are best suited for.

Though Foucart received the grant in July, “we’re just starting the project,” he said. He and two undergraduates majoring in physics are on the project, along with a student from Keene State College. Foucart is currently hiring a postdoctoral associate and graduate student. The grant provides five years of funding.

With this grant, Foucart will focus on the nuclear physics and computational models of a certain type of star.

“What we are studying is the collision of two very compact objects. One of them is always a neutron star in our case, and the other one can…either be a neutron star or a black hole,” Foucart said. He added that all those objects are “the same mass as the sun, but are within a few kilometer radius.” He equated the size of the star to that of a small city.

“Within a fraction of a second, then in the case of neutron star and black hole, the neutron is just ripped apart by the black hole, and then you get a lot of [physical objects] ejected.” These objects are fundamental components of matter, like subatomic neutrons and electrons.

“A neutron star is made largely of neutrons, it’s very dense… because that’s what happens when you compactify matter that much.” Foucart said. Of the subatomic particles, neutrons are the densest.

“When [particles are] ejected, that’s not a stable state of matter… and the matter expands, and so it’s going to form new elements, as it expands, and in that process, it forms a lot of the heavier atomic elements,” he said. Foucart pointed out these atomic elements are the elements lower on the periodic table. In the periodic table, the farther down on the table an element is, the heavier it is.

“Part of what we are trying to do is figure out whether [heavy elements] are mostly formed in these events or not. People have gone back and forth to what the origin of these elements are. So that’s one aspect [of the project] and the other one is just observing these neutron stars tells you about the properties of matter inside the neutron stars. And that’s a state of matter that’s has a lot of unknown in nuclear physics. We cannot actually study it in on earth, it’s too dense, we cannot actually make an object like that,” Foucart said.

“The only way for us to study what matter looks like at those high densities is by studying neutron stars; by studying the properties of neutron stars at a particular size, we can actually get information about nuclear interactions at very high densities. So that’s sort of where nuclear physics come into play, trying to explain the properties of dense matter, and trying to explain the origins of those dense elements,” he said.

Foucart is going to focus on the computational modeling of these events, of neutron stars merging, by building algorithms to understand the matter expelled. These models can then create a simulation of what physicists expect to happen. To actually make the simulation, however, and run it, takes significant resources: Foucart said that running a single simulation is a multiple-month effort with supercomputers.

The reason these simulations are so resource dependent is because of the many niches they incorporate. Foucart talked of equations for fields such as general relativity, magnetic fields, “gravity of very compact objects,” radiation, and very small particles.

Another challenge, which is also concurrently a benefit, is that what Foucart is working is “a pretty rapidly evolving field. [This is] because the first of these systems was detected in 2017… We are still trying to just understand what the data means.”

This is a benefit because the event was as expected—the physicists’ predictions were right, and extensive revision of those predictions doesn’t have to happen. The event was observed through many telescopes that documented minute changes in space, a new star and changes in fields such as gravitational fields and gamma waves. The documentation of this event opens up the chance for more questions, meaning more study that has to happen.

In the immediate future, Foucart is going to work on neutrinos – subatomic particles so small their interactions with other matter are effectively nonexistent.

“They just pass through us,” Foucart said. “But in neutron stars, neutron stars are very, very dense, [neutrinos] actually interact with the matter and can change its properties…[changing] which elements are produced in the nuclear synthesis.”

All the knowledge produced from these simulations, and all these new understandings gained, will get at the basics of physics knowledge.

“There’s a fundamental physics question, a fundamental science question, which is where are the things we see close to us, produced? Where are they coming from?” Foucart said. “Presumably it’s going to lead to some applications, but it’s far enough in the future that it’s hard to tell immediately what that’s going to be.”

Students interested in working with Foucart can contact him at [email protected] Foucart usually has one or two undergraduates working with him at a time.