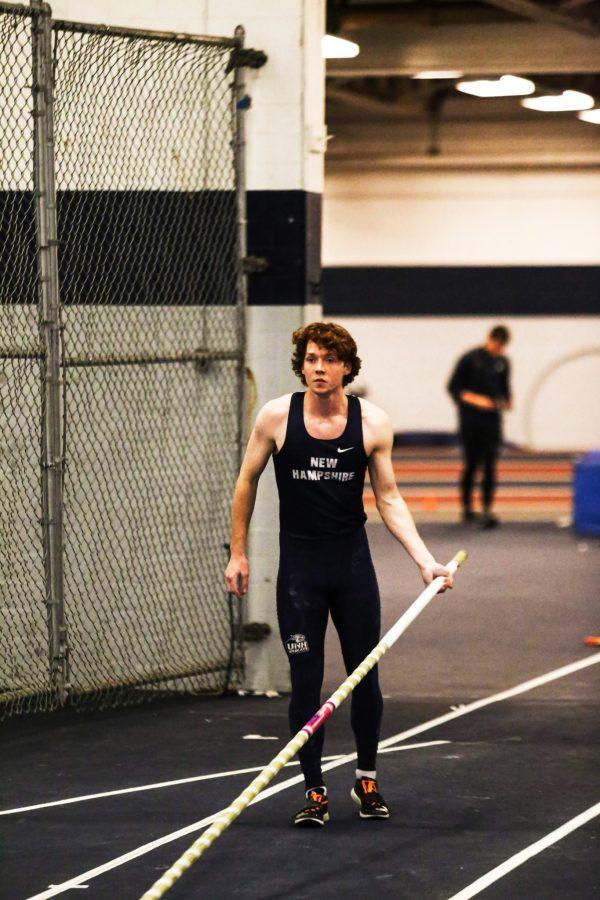 This past weekend, the UNH men’s track and field team travelled to Boston University for the New England Championships Track and Field Meet. Out of the 22 schools that participated, UNH finished in fourth place with a total of 45 points.

The Wildcats’ strong year continued thanks to great performances from seniors Zachary Astle (Throwing) and Nicolas Sevilla-Connelly (Running). The pair totaled 30 of UNH’s 45 points as they combined for three first-place finishes, each worth 10 points.

Head coach Jim Boulanger commented on this team’s performance this past weekend saying, “Overall, I feel that we’re a better team. We can still do more. We had quite a few guys sitting out injured with that dreaded cold and virus that’s going around campus… I’m definitely happy with the position being in the top four in New England out of 22 teams.”

Zach Astle continued his dominant season yet again, sweeping the throwing events. Astle has not lost a single throwing event this year and he is getting better as the year goes on. He won the weight throw with a distance of 63’3.5” and set a new personal best in the shot-put with a distance of 56’1.25”. Coach Boulanger was very proud of Astle who actually did something no UNH track and field performer ever has.

It has gotten to the point after five meets now, that it is expected that Astle will not only win, but sweep whatever throwing events he is participating in.

In the running portion of the competition, Nicolas Sevilla-Connelly had a tremendous 3000-meter run. Astle was not the only UNH competitor setting new personal bests as Sevilla-Connelly joined him as well. Sevilla-Connelly ran an 8:21.51 3000-meter as he took first place as well. Boulanger spoke on his run saying, “Nico ran a really great race, waited to go and when he did go, he made a commanding move.”

Outside of Astle and Sevilla-Connelly, the Wildcats had eight other scoring performances. Senior Matthew Adams finished fifth in the 800-meter with a time of 1:56.8. UNH had two scorers in the 1000-meter in sophomore Spencer Sawyer and first-year runner William Curran. Jacob Dearborn was the second Wildcat to score in the shot put as his throw went 48’5.5.” Then in the mile, UNH had two scorers as well. Junior Aidan Sullivan and senior Samuel Lanternier finished in 4:14.87 and 4:15.08 respectively.

The men’s track and field team will travel down to Rhode Island for the URI Coaches Tribute meet on Saturday, Feb. 8. Boulanger is looking for another great meet out of his performers.

“There are seven teams and then two partial teams, so there will be seven full teams that will give us good competition.”