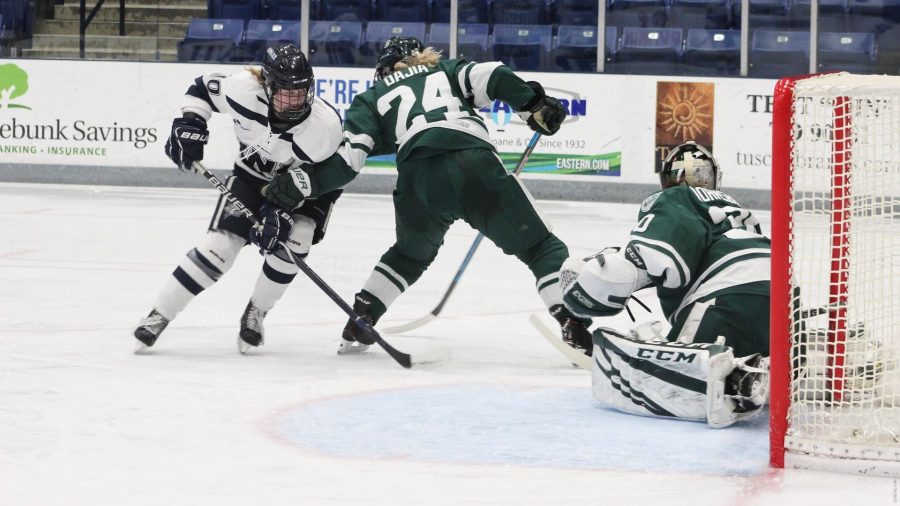 The UNH women’s hockey team spent this past weekend at UMaine battling against the rival Black Bears, and then also faced the Dartmouth Big Green on Tuesday in Durham.

It was a great week for UNH first-year goaltender Ava Thewes, who won the Hockey East Defender of the Week award for her play in the two games against UMaine. All three Wildcat goalies have now earned the award at some point this season. She earned the start on Tuesday night and got her first career win as well.

The Black Bears took game one last weekend by a score of 5-1, as they scored four unanswered goals and scored two of them on the powerplay against a Wildcats penalty kill that ranks fourth in the nation. The shot battle was close between the two squads. The Wildcats lead that category 33-30, despite the losing effort.

The Black Bears were led by first-year forward Ida Kuoppala’s two goals and two assists, as well as sophomore forward Liga Miljone who scored one goal and registered three assists.

UMaine broke the ice 14:41 into the first with a wide shot that got deflected by Kuoppala under the glove of Harnett, from sophomore defensewoman Ida Press and Miljone.

The Wildcats tied the game early in the second period off sophomore defensewoman Emily Rickwood’s fifth goal of the season, which was assisted by first-year forward Annie Berry. Rickwood took a shot from the faceoff dot that beat the goalie high on the glove side. Her five goals lead all blue liners on the team.

Seven minutes into the second period, the Black Bears regained their lead on the powerplay with just one second remaining on the penalty clock. Sophomore forward Ally Johnson tipped in a shot from Press and Kuoppala. Two and a half minutes later, UMaine doubled their lead, scoring on the powerplay again. First-year forward Ella MacLean scored from Miljone and junior forward Maddie Giordano.

Kuoppala scored her second of the game with five minutes left in the second period after catching a pass from Miljone. The Black Bears added their fifth and final goal just two minutes into the third period when Miljone was coming into the zone on a rush and labeled a shot over Harnett’s shoulders. Thewes came in for the remainder of the game in relief and stopped all seven shots she faced.

The Wildcats had the opportunity to climb back into the game with three power plays in the third period but they could not break through.

The Wildcats were able to scavenge a point and prevent a series sweep in the second game, as the teams tied 2-2 in Saturday’s game. The two teams played a hyper-competitive game, as they tied in shots taken, 31-31, as well. The Black Bears got the first goal again with Press scoring nine minutes into the game.

Sophomore forward Lauren Martin tied it for the Wildcats a mere 11 seconds into the second period with assists coming from her linemates: first-year forwards Jada Christian and Tamara Thierus. That line continues to excel for the Wildcats with their play. The goal was Martin’s fifth of the season.

Two minutes later, UMaine scored their third power play goal of the weekend. Harnett made the save initially, but the puck trickled past her and into the net. Thewes replaced her after the play and shut the door stopping all 17 shots that came her way.

The ‘Cats tied it again ten minutes later with an unassisted goal from Christian, her sixth on the year. She created a turnover near the blue line, skated in and sank the shot.

The Black Bears had a big opportunity with just two minutes left in overtime. They were on the powerplay, but the Wildcats penalty kill stifled them with the help of a big blocked shot from Rickwood. This block kept the score even long enough to force a tie.

Then on Tuesday, Thewes was given the nod and made the most of it by making 21 saves to secure a 3-1 win, the first of her career. She had to make a few high-quality saves to help get the win as she got compliments from head coach Hillary Witt.

“Ava was great, I think everyone found a way to grind it out. I was really pumped that Dunny and Meghara got goals there, and also Lauren. It was good to get some senior scoring and we’re gonna need them down the stretch.”

It was Thewes’ second career start and fourth appearance. The other two came just came last weekend, and the first was a loss to Penn State in December. Her record stands at 1-1-1, as she was credited with a tie last Saturday.

“It felt great. It was good to get that under my belt, I thought the team played really well and it was nice to get some blocks in front of me,” said Thewes. “I think we played well in our own zone, got the puck out and had timely blocks.”

The Wildcats started the game putting a lot of pressure on their opponents, but did not score until eight minutes in. In that eighth minute, senior forward Nicole Dunbar scored her fifth goal of the season off a great back-door feed from junior forward Grace Middleton. Senior captain and defensewoman Tori Howran was credited with the secondary assist.

The Big Green started off the second period strong with a couple big shifts. Thewes had to make some strong saves to keep the score tied. The Big Green did not score but got momentum from these early shifts.

Halfway through the second, the teams had a four-on-four which the Wildcats took advantage of to score their second of the game. Senior captain and forward Taylor Wenczkowski entered the zone with the puck and sent a pass to Rickwood in the slot. The pass hit her skate and went right to senior forward Meghara McManus as she scored her team leading 15th goal of the season. It was McManus’ 22nd point on the season which also leads the team.

Wenczkowski nearly had a goal of her own a few minutes later right as a Wildcats penalty was ending. She entered the zone and used her speed while protecting the puck to get ahead of the defender and she got hooked drawing a penalty, but still got a good shot off that was saved.

On that penalty, the Wildcats scored their third and final goal of the game. Martin scored her sixth of the season off a rebound from a shot from the point from senior captain forward Carlee Turner who was given the puck by Howran. Howran’s 15 assists on the season leads the team and her 16 points leads UNH defenders.

Dartmouth tried for a third period push and had some chances but were only able to muster one goal. The Wildcats skaters gave Thewes some help with good stick positions and four blocked shots. The Wildcats had plenty of opportunities of their own with 23 shot attempts.

“I thought it was kind of up and down. I thought we had times where we did a lot of really good things and we had some lapses but the good thing was we found a way to finish the game so we’ll take it, a win’s a win,” Witt said.

UNH will try to win their second straight game on Friday, Feb. 7 at 2 p.m. as they will visit Boston College.