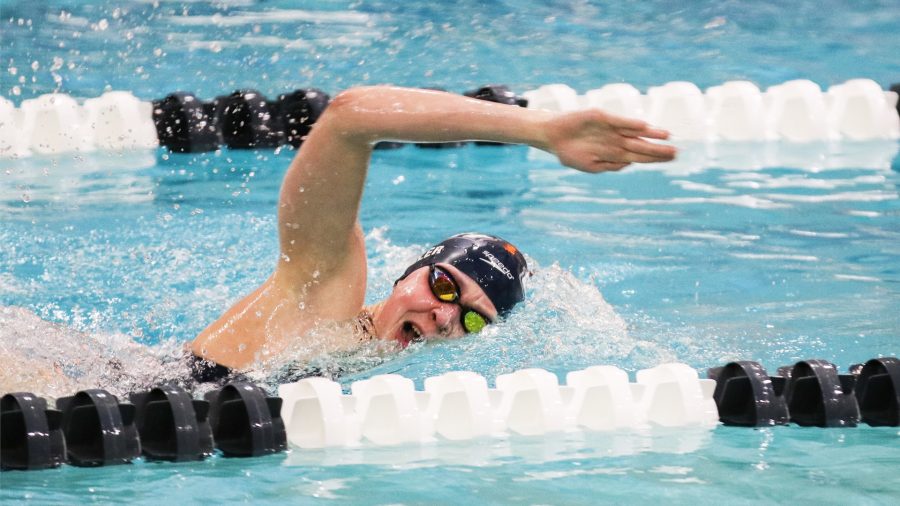 The Wildcats returned home for their final home meet this year and the final meet in Durham for the three seniors, Corinne Carbone, Allison Stefanelli and, Anna Burns. The Cats’ won easily with the final score of 154-116 and are now looking ahead to the America East Championship.

The Cats’ jumped out to an early lead taking first and second place in the 400 freestyle, then Stefanelli and Burns extended the lead as the Cats’ never looked back. UNH head coach Josh Willman spoke after the meet about the seniors and Stefanelli coming back more specifically. “She couldn’t compete in the fall; we’re trying to be cautious with her, but she looked good out there. She’s such a beautiful diver and has so much experience that she can rely on it…. Over the next couple of weeks, we’re going to get her to work on her hurdle but be cautious about her injury.”

Sophomore Anna Metzler had another strong performance after being the reigning America East Swimmer of the Week. Metzler broke a UNH record and is looking forward to the America East Championship and NCAA Championship. Willman commented on superstar swimmer’s prowess. “She’s really intensely motivated to make NCAA’s this year, she’s going to need to break 4:10 in the 400 IM and I think that’s a really doable goal. She’s going to have to break Katy Man’s record in the process, and (Metzler) has the focus to do it.”

Metzler was able to put up a 4:11 at the BU Terrier Invitational with minimal rest, which is a good sign as that is just a second off of the mark that she wants to beat. Metzler has a good shot to compete this year and is one of the stars to watch for UNH.

Now the Wildcats have a two week break as they prepare for the America East Championships in Worcester, Mass. Willman spoke on how they plan on preparing for that. “We’re resting right now, which is a process of reducing the yardage and intensity but trying to maintain the power and speed. It’s more of a fun time of the year for them as we don’t practice as hard and don’t have any doubles and they’ll feel less beat up on a regular basis.” He continued to add “as the nerves start to set in, we try to make them feel comfortable because they all swam really well at BU so, it’s just about settling them in so they can do their best times.”

It’s been a really good year for the team as they end the regular season with a 5-1 record having their only loss come to a tough Northeastern team by 4 points. They won a 75 out of 92 events this year in six dual meets. They are poised to put up a good fight and should have a number of swimmers coming out of the America East Championships and National Invitational to make a run at the NCAA Championships.