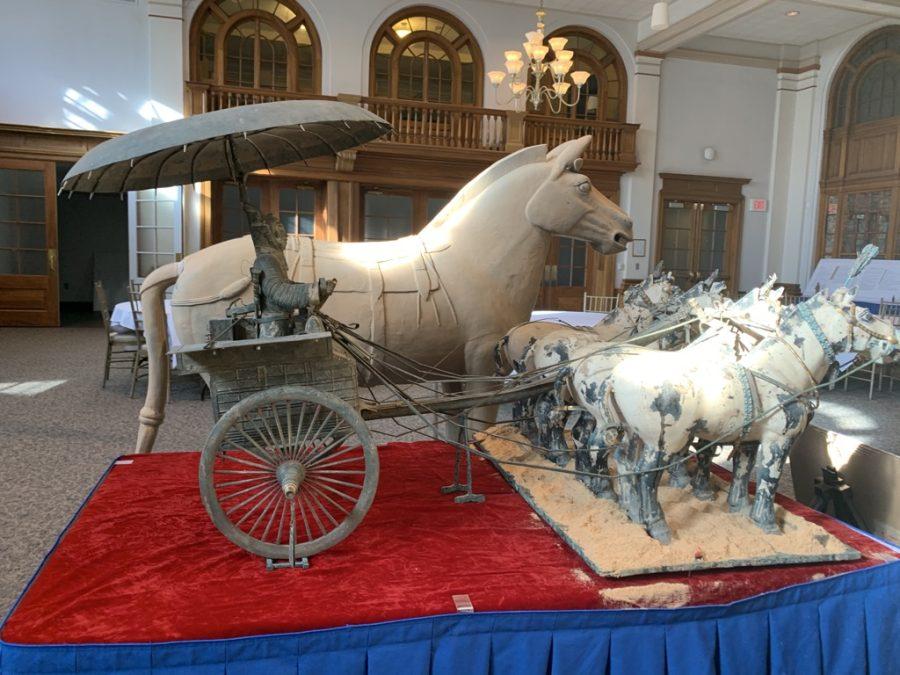 Life-size statues of ancient Chinese warriors, from archers to generals to chariot drivers, and a horse, stood in the ballroom of Huddleston Hall and in the lobby of Dimond Library this past week and a half. The statues were replicas of the famous Terracotta Warriors. The Confucius Institute, a partnership between Chengdu University and the University of New Hampshire (UNH) housed in Huddleston Hall, brought the replicas.

The replicas are made of select statues of the 6,000 warriors currently known from an archaeological site in Xi’an, China, UNH Confucius Institute Director Yige Wang said.

The warriors were discovered in 1974. “It was discovered by accident…by a farmer trying to dig a well,” Wang said. “The whole entire village had to relocate.”

The warriors are to protect Qin Shi Huang, who started the Qin dynasty and was the first emperor of China, in the afterlife. Wang compared the warriors and the scale at which they were built to the great pyramids of Egypt, made for Egypt’s pharaohs.

Over 750,000 people over the course of 38 years, he said, worked on these warriors and the burial site.

“They basically hollowed out an entire mountain,” she said. The warriors, each unique in features, are housed in pits in the mountain, and though 6,000 are currently known, “this is an ongoing excavation,” Wang said. “All modeled after the actual soldier.”

Aside from life-size statues, the UNH exhibit included tables for workshops related to the exhibit, smaller replicas and a half-size chariot with four horses. Wang remarked that the chariot was half size, at 400 pounds, because of the sheer weight of a full-size chariot being near a half ton and thus not practical to transport into Huddleston.

The exhibit in Dimond Library served to make people aware and attract people to the Huddleston exhibit, containing both a display case of related materials the library owns, and unique statues, which Wang highlighted. The chariot and the statue in the library had spots of gold and red paint on them, reflecting the paint that was originally on all the statues and has since faded and worn away. The replicas were made by experts at the Hubei Provincial Museum, in Wuhan, “hand copied” from the original statues.

Each year, Wang said, the Confucius Institute works to put on an exhibit for the public to provide education about an aspect of Chinese history or culture. The Institute decided to bring the Terracotta Warriors because this year is the tenth anniversary of the Institute being at UNH.

The statues were bought by a grant and commissioned by the Institute.

“We were able to make it happen at minimal cost…and we’re happy to see the end result,” Wang said. He noted that a variety of universities from the region are interested in hosting the exhibit, which attracted significant regional media attention.

This interest is despite ongoing controversy over Confucius Institutes at universities, including this one, and that these Institutes encourage propaganda and values not supported in American academia, as reported by New Hampshire Public Radio (NHPR) and others. According to NHPR, these values do not seem to be an issue at the UNH Confucius Institute.

Nor were they an issue for people attending the exhibit: the Confucius Institute reached out to local schools, such as Bow and Merrimack High Schools, which brought classes to the exhibit, along with a lunch at Holloway Commons.

“We’re very open…whatever we do is always free and open to the public,” Wang said, in emphasizing how interested the Institute was in education and spreading knowledge to all ages, as well as a strategic priority proposed by UNH President James Dean at the 2019 State of the University Address. “This is very much in alignment with President Dean’s new initiative of ‘Embracing NH & Serving the Community,’” Wang wrote in an email towards the end of the exhibition, referring to the “Embrace New Hampshire” strategic priority.

Wang noted lectures that also accompanied the exhibit, and that in planning exhibits like these, the Institute uses a “very transparent process” in preparing for each upcoming year.

The Institute reached out to departments in the College of Liberal Arts (COLA) about the exhibit. A philosophy course was slated to visit the exhibit, particularly another part of the exhibit: the Qin dynasty bamboo strips.

Along one wall and in the Dimond exhibit case were replicas of and informational materials on these bamboo strips. The bamboo strips were from a Qin official. The strips were buried with the official, and when his coffin “was unearthed in 1975 it was still legible,” Wang said.

The strips themselves were small and thin—approximately a centimeter wide or less. The characters on the strips documented the laws of the Qin dynasty, which, Wang said, was known for its harsh laws and consequences for breaking the laws, such as steep fines, and physical and lethal punishment. The laws were part of the legalism philosophy of the dynasty.

Despite these punishments, “the Qin dynasty is very influential in Chinese history…it unified Chinese writing,” and standardized other elements of society, such as road widths, Wang said. The Qin dynasty “conquered every city-state, created [the] emperor…this really laid the foundation for China…to always come back together…you belong to the same nation.”

Since the “characters are the same,” she said, “this is what kept China together.” She said that despite the thousands of years between when the strips were written and the present day, because of this “unified” writing, she could still understand what the strips said.

These bamboo strips were brought in to help explain the Terracotta Warriors.

“We can show the Terracotta Warriors, but what about the stories behind them? We thought the bamboo strips can really tell the story,” Wang said.

Wang hoped that the exhibit could impose some of the grandeur of seeing the Terracotta Warriors in Xi’an. “It’s a surreal experience [in Xi’an]… we certainly can’t recreate that here,” she said, adding that with the replicas, visitors could imagine 6,000 warriors in pits below their feet.

And many were eager to imagine so: “We are happy to report it has been overwhelming: we have had people driving an hour and a half in wheel chairs coming to see the exhibition and thanked us for fulfilling their dreams (otherwise they won’t be able to travel to China)…People have been emailing us to sign up constantly,” Wang wrote in emails brimming with excitement, adding that the exhibit has likely seen almost 2,000 visitors, from school groups to residents of retirement homes.

The Dimond Library portion of the exhibit remains in place. Students wishing to get involved with the Confucius Institute can take courses in Chinese and study abroad in Chengdu, China.