NDSU bests UNH in back and forth battle 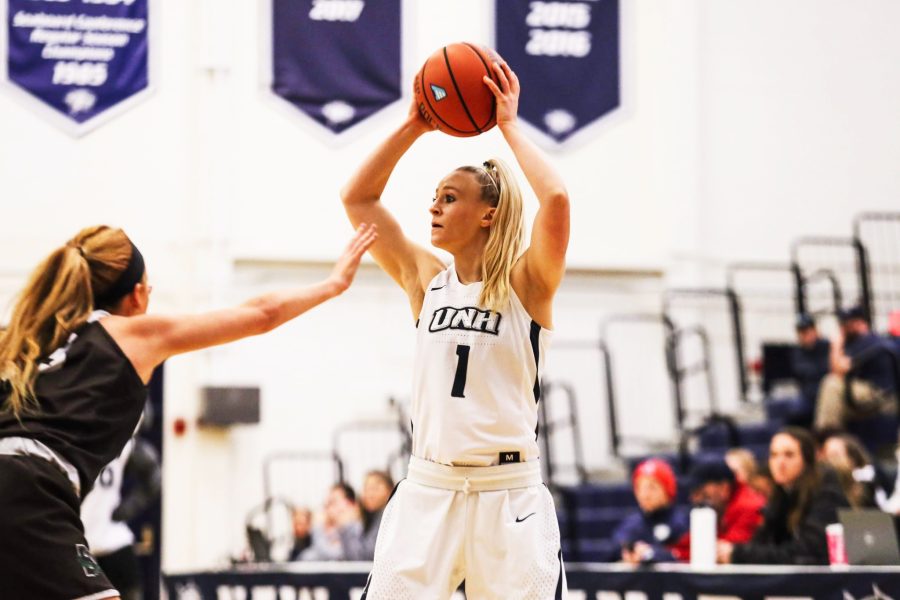 This past Sunday afternoon, the UNH women’s basketball team (2-5) suffered their fourth loss in their last five games to North Dakota State (1-7) in the schools’ second matchup ever. Their last matchup was last season and North Dakota State won 56-51.

The Wildcats fell short this year by a score of 67-61 despite senior forward Ashley Storey registering 19 points, three other Wildcats eclipsing the 10-point mark and shooting 85 percent from the free throw line collectively.

Storey detailed her thought process about playing well despite her team’s lack of success in 2019.

“I really don’t care about how I play. I just want to win. I’m just trying to help my team win and if we aren’t doing that then I’m not happy.”

From the jump, both schools were aggressive and sharp with their offensive decision making as the game was tied at nine after four minutes.

The rest of the first quarter consisted of a run by both UNH and NDSU. The Bison struck first as they went on an 8-2 run to give them a 17-11 lead with a little over four minutes remaining. The Wildcats would take the punch and counter with their own 6-2 run to cut the lead to 19-17.

Unlike the first quarter, the second ten minutes of the game were severely lopsided in NDSU’s favor. The first minute of the period would not suggest that, as the Wildcats forced back-to-back turnovers and took the lead, but from then on it was all NDSU.

The ‘Cats chipped away with buckets here and there in the remaining time before the halftime buzzer, but what really discouraged UNH going into the locker room was NDSU’s buzzer-beater three by (name)that gave them an 11-point lead.

UNH’s discouragement seemed to be erased by head coach Maureen Magarity as they came out in the third quarter with their pants on fire and cut the Bison’s lead to 36-31; this prompted a timeout from the NDSU coaching staff.

When asked about her halftime adjustments, Magarity attributed the change in play to her team.

“Our players were just playing harder. We need to be more consistent with our play overall, but I think we played hard coming out in the second half and that gave us a chance.”

The Bison got back on track after the lip service from head coach Jory Collins and went on another run, this one was 9-4 over a span of just under three minutes. This pushed their lead back to double digits at 45-35.

The game was a series of Bison punches that UNH had to either counter or surrender to, and UNH fought back at every moment of adversity, as they responded with a 7-4 stretch to get the NDSU advantage down to seven going into the fourth quarter. The Wildcats outscored the Bison 17-13 in the third despite recording seven turnovers.

Senior guard Caroline Soucy (12pts) opened the fourth quarter scoring with a pull-up jumper from the foul line, but any momentum that the Wildcats accumulated was gone when the Bison responded with two quick buckets to silence the crowd.

UNH made their final push with 3:32 left in the game as junior guard Amanda Torres hit a three-pointer to cut the lead to six once again. At this point the NDSU bench was really sweating and called a timeout to stop the bleeding.

After the timeout, UNH was able to get the ball back on a silly offensive foul by the Bison. The ‘Cats had the opportunity to cut the lead even further, but they squandered it when they failed to score on the next possession. NDSU responded with an aggressive drive to the basket and two made free throws to push the lead to eight.

From then on, the Bison took their foot off the gas a little bit which allowed UNH to outscore them by four points the rest of the way, but it still resulted in a six-point win for NDSU. After the loss, the Wildcats fall to 0-3 this season in games decided by ten points or less.

UNH returns to action against the UMass Minutemen on Dec. 5 at 7 p.m. This will be their first away game since Nov. 16 against Merrimack.