‘Cats lose in second round of America East Tournament 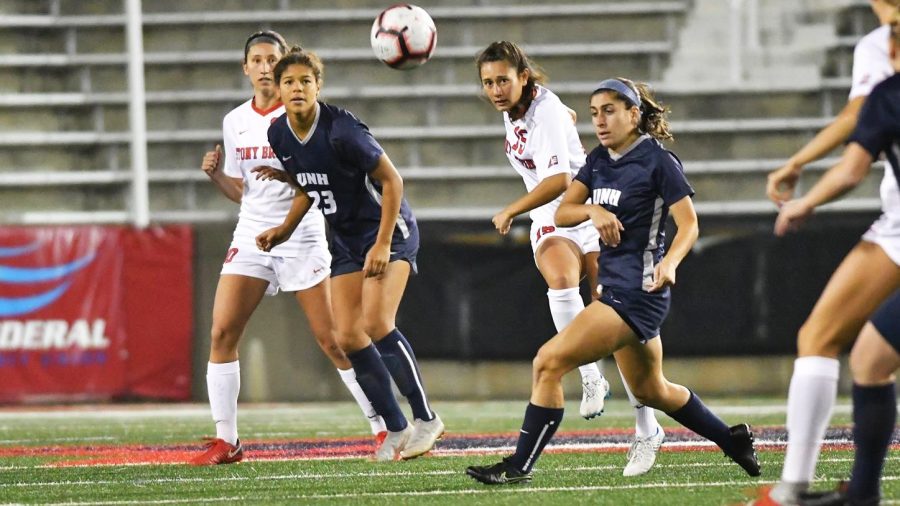 Last Thursday night the Wildcats strolled into Kenneth P. Lavalle Stadium to face the No. 1 seeded Stony Brook (14-5-1, 6-1-1) and forced them into a heated battle for the duration of the match. Two second half goals in the span of four minutes was what did UNH in as the Seawolves came out on top by a score of 2-1.

The first half was a pure defensive battle. For the first 15 minutes there were no scoring chances for either side and the competitive back lines controlled the game.

UNH senior forward Kaylan Williams was the first player to get any sort of a glimpse at the opposing goal as she found a seam towards the top of the 18-yard box and deposited a shot that went wide of the right post.

Later in the first half, senior midfielder Liz Lane carried the ball up the right side and into the Stony Brook box before making a centering pass to first-year midfielder Whitney Wiley. Wiley was able to one-time a soft placement shot towards the left side of the net, but Seawolves junior goalkeeper Sofia Manner was able to make the stop.

The first half was dominated by the ‘Cats on both side of the ball. They held Stony Brook to just three shots on goal, and sophomore goalkeeper Cat Sheppard was a large part of that as she sported assertive play that helped UNH’s energy tremendously. The energy and passion mirrored what is usually in a championship-level game, and head coach Steve Welham acknowledged that.

“It had the feel of a championship game. Sometimes the semi-final games just have that feeling and this one certainly did. Both teams felt like whoever won this game was going to go on to win the whole thing and that’s what Stony Brook did,” Welham said.

However, the Wildcats could not hold down the Seawolves offense for the whole game. In the 60th minute, Stony Brook junior forward Erin O’Connor maneuvered her way to the left side of the UNH box and proceeded to fire a goal into the bottom right portion of the goal past Sheppard.

Stony Brook’s lead lasted under a minute as Williams answered right back with a goal of her own. The senior turned a Seawolves defender over inside her own box, where Williams deked another defender and snuck an improbable goal into the net to tie the game at 1-1.

To end the scoring, O’Connor would register her second goal of the match in the 64th minute. She weaved her way through multiple defenders and shot another low strike to beat Sheppard. This would be the goal that capped off the Wildcats’ 2019 campaign, as they weren’t able to create any serious chances afterwards.

Coach Welham believes that this loss is going to be felt for a long time in his team’s locker room due to the well-fought nature of the game.

“This one is going to sting for a while, I think the team felt that way. We felt like we played well enough to go to the finals and it just didn’t go our way. The belief was there, and the desire was there, but most importantly the talent was there as well.”

UNH’s ten seniors led the team for the bulk of this season and their previous three as well. The coaching staff and the team will miss them tremendously as they accounted for over 70 percent of the scoring output in 2019. Welham expressed his appreciation for his seniors, and how their impact will help his team going forward.

“We really had a great group of seniors and they helped us set a tone in this program that we think will help us down the road…we have a great recruiting class coming in and we are very excited to work with them,” Welham said.