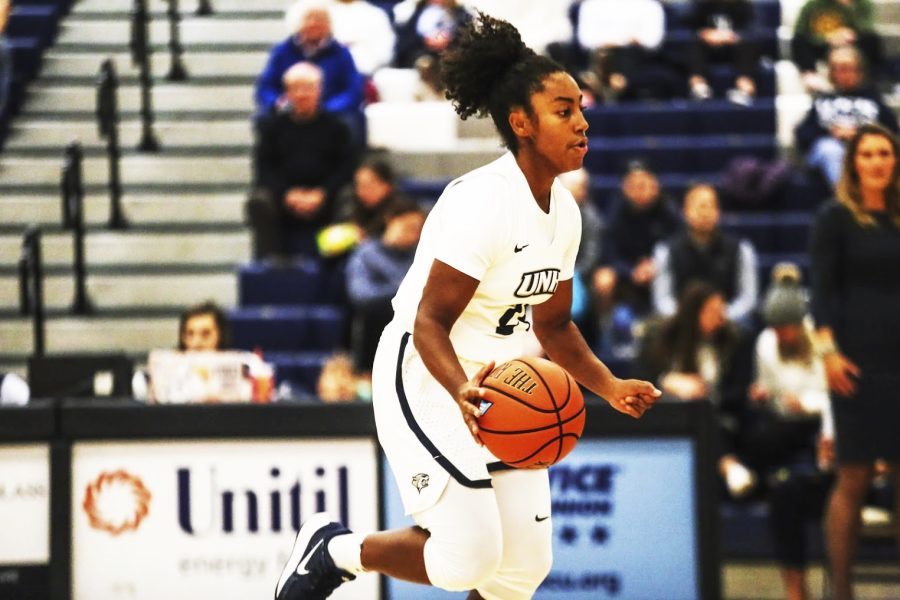 In the UNH women’s basketball team’s (1-2) home opener, the Wildcats fell to the BU Terriers (1-1) by a score of 78-64 despite senior forward Ashley Storey’s career night.

This past Tuesday, Storey was able to follow up her strong 14-point performance against Bryant last Saturday with a career high 24 points along with seven rebounds against the Terriers.

Coming out of the timeout, Storey hit three straight buckets to tie the game. She thought this was a pivotal turning point in the game.

To go along with Storey’s first quarter production, senior guard Caroline Soucy added four points and two assists in the opening frame to give the ‘Cats a 26-20 advantage.

BU surged back in the second quarter as Childs started the scoring off with a three-pointer from the top of the key, and Irving followed that up with a layup to cut the lead to one.

Play was neck and neck between the two teams for the rest of the quarter. BU junior guard Katie Nelson and Storey battled, leading their respective teams up until halftime where the score was tied at 42 apiece. UNH shot 67 percent from the field in the first half on 20-of-30 shooting.

The Terriers predominantly played man-to-man defense in the first two quarters which allowed Storey and other UNH bigs to pound the ball inside the paint. The second half was a different story, as BU adapted to the Wildcat style of play and went into a 2-3 zone.

This defensive change helped BU outscore UNH 21-11 in the third quarter to give them a 63-53 lead. Soucy and Storey added eight points to the Wildcats’ total in the opening two minutes of the period, but the rest of the team was only able to manage two points the rest of the third. Magarity acknowledged that the zone affected their play, but she was more upset with her team’s play on the other end of the floor.

“In the second half we struggled to find a rhythm offensively. They played some zone, I thought we moved the ball well, and the shots just didn’t fall for us. The biggest thing to me is allowing 78 points. Defensively we have to pick that up.”

Magarity added that the zone severely hurt her team’s chances to score baskets in the painted area, and that was what did them in.

“In the first half we were able to pound the ball inside to Ashley, but with the zone in the second half we struggled making outside, perimeter shots to open things up for us. But I still feel like whether we play against man or zone we have to stick to what is working.”

Childs, Irving, Nelson and first-year guard Sydney Johnson all scored in double digits for the Terriers and had sizeable contributions throughout the second half to pull away from the ‘Cats. Tuesday night’s performance did not live up to UNH’s defensive capabilities and Storey, much like her coach, thought that was a big reason why her team didn’t come out victorious.

“Defensively in the second half we couldn’t pull through. We couldn’t get the stops we needed, and we were making silly fouls…we just didn’t adjust.”

Despite the loss, Storey put up the first 20-point game of the season for the Wildcats and the ninth of her career. Also, Soucy recorded a quality stat line with 14 points, and three assists and first-year guard Helena Delaruelle racked up eight assists.

UNH now falls to 1-2, and they will travel to play Merrimack on Saturday, Nov. 16 at 6 p.m. Merrimack is new to Division-I college basketball, but Magarity doesn’t think the newcomers will roll over easily.

“Merrimack has just turned D-I, and they are playing really, really well. Their post play is active and long and aggressive. They play extremely hard and that mirrors their coach. They are hard nosed and get up into you defensively. They took Lehigh to overtime and Lehigh was preseason number one in the Patriot League, so it’s going to be a tough test.”