A wholesome evening at the Fall Farm Fun Fest 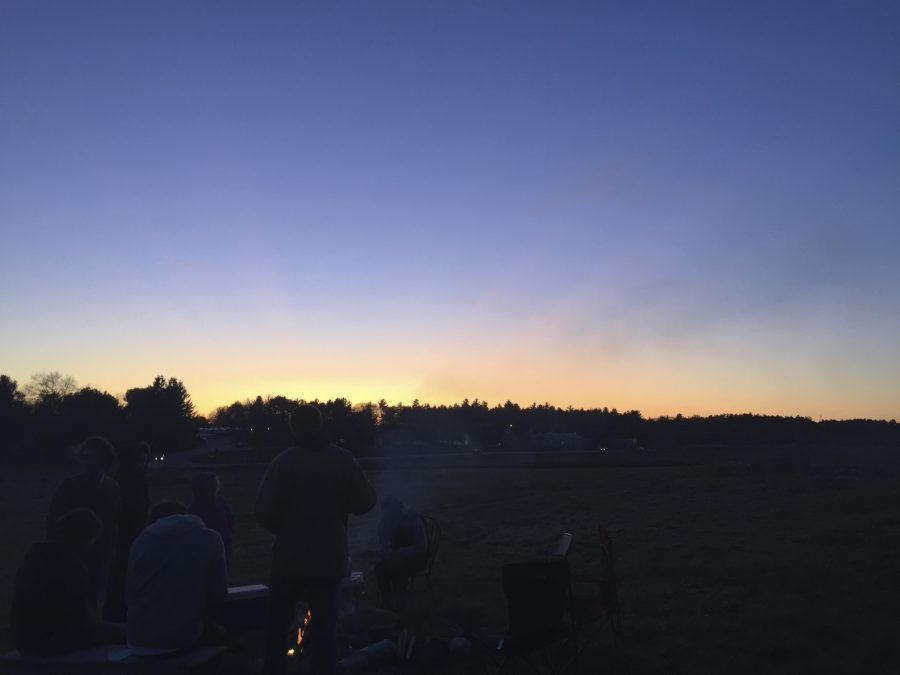 Food on the grill sizzled while people got crafty this past Saturday at the Organic Garden Club’s (OGC) farm, located on Spinney Lane, on the way to the Fairchild Dairy Teaching and Research Center. About 20 people visited the farm during the two hours, even though it was 41 degrees Fahrenheit during the OGC’s Fall Farm Fun Fest that featured craft making and hot dogs and hamburgers.

The OGC was established in 2003, said OGC president and sophomore computer science major Jack Bradley. It acts to both promote and “teach people…how to grow [an] organic field, how to be sustainable.” The OGC does not have many active members, Bradley said. Many of people at the event were OGC members, and the rest were mainly friends and family of members of the organization.

The OGC has many more inactive members, Bradley said. For past events and tasks of managing the farm, “People came out of the woodwork to support OGC,” he said.

The club handles many tasks to manage the two acres they oversee, which grow a variety of foods, including mint, raspberries, hops, potatoes, squash, green beans, eggplant and more. The club gets together every Sunday from 12 to 3 p.m. to manage the farm, while Bradley takes care of the farm the rest of the week. During the summer, the farm employs full-time managers, who help bring produce to the local farmers’ markets the OGC attends, as well as putting together CSAs, or community-supported agriculture.

With CSAs, people can pay a local farm for a portion of their product – as varied as produce or meat – that they will receive on a regular basis. For the OGC, this was baskets of produce every week.

As 3 p.m. arrived and the Fun Fest started, some OGC members put the finishing touches on the festival, while others began making crafts. Nate Keene, a first-year computer engineering major and member of the OGC, was focused on making a pet rock, while others used peanut butter, bird seed and pine cones to build wild bird treats, or wrapped yarn around popsicle sticks to make geometric patterns.

Crafts were constructed inside the OGC’s red barn. The barn, with a dirt floor, was not insulated, but provided some refuge from the slight breeze. It also held more food, such as chips, doughnuts and cookies. People could also serve themselves apple cider in mason jars—there were at least four gallons of cider to drink. Gardening tools and related books filled the rest of the barn’s space, while décor was hung amongst the rafters and beams. The décor – a variation including bird treats, paintings and animal leg bones – was part of the barn’s aesthetic, Bradley said; members sought to find unique items to hang around the barn.

As Bradley began grilling, visitors played cornhole and took self-guided tours around the farm. Most of the produce had been harvested because the growing season has practically ended with the weather growing colder. But the plots and rows were still visible, and the high tunnels – produce covered with plastic in a small Quonset-hut style – still stood.

Visitors could even stop by a small pond in the middle of their fields, which Bradley said had been dug by intoxicated students some years ago. Today, it serves as a frog habitat, he said. The surface was covered in a small plant called duckweed with cattails growing in part of the pond.

The OGC does not just have organic in its name; the fields are certified organic, Bradley said, mentioning that the OGC’s agricultural practices are governed by a regulatory book. “Everything that goes into [the] field has to be organic,” he said, adding that the only substance that doesn’t have to be organic is cow manure.

Visitors got to try some of the organic produce when the burgers were grilled; tomatoes and onions served as toppings.

As Bradley grilled, he reflected. “I love the farm…it makes my heart smile,” he said.

The day wore on and the temperature began to drop, and the only visitors left were friends, family and members of the OGC. Bradley and others built a fire that provided a sharp, bright contrast to the oncoming sunset—which was at 4:26 p.m. Everyone gathered around the fire, though it was too small to provide roaring warmth.

Night crept closer, the sun setting beyond the trees across Main Street near the West Edge parking lot. According to Bradley, the farm is “the best place for sunsets on campus.”

The Fun Fest ended at the fire. Last light was set for 4:55 p.m., and the temperature was 34 degrees Fahrenheit. Yet all enjoyed the peace of standing around the fire, sun setting on the farm.

The Organic Garden Club meets Mondays at 7 p.m. in the Memorial Union Building, and co-sponsors community dinners at the Waysmeet Center on Mill Road.