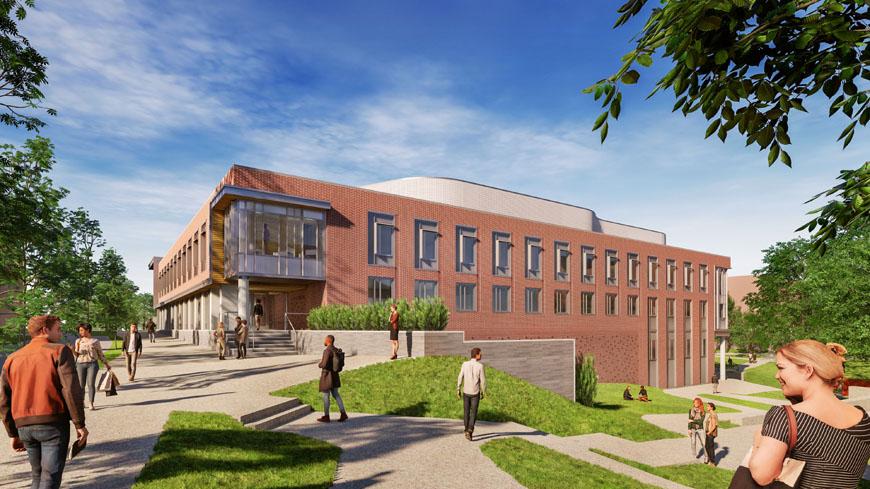 The construction work on Spaulding Hall has entered a new phase, according to an email circulated to the College of Life Science and Agriculture (COLSA) and University of New Hampshire (UNH) staff last week. The crew is finished blasting and has moved onto “hoe ramming.”

The email, sent out by Richard Rouleau, project manager for Facilities Project Management, said that blasting was “now complete.” Rouleau added that “mechanical rock breaking via hoe ram” would begin on Monday, Nov. 11.

According to Doug Bencks, university architect and director of Campus Planning, said in an email that blasting took “about as long as we anticipated” and they don’t “expect to do any more blasting.” He also added that they expect hoe ramming to last two to three weeks.

These methods of digging of a hole are standard procedure for all construction projects that include “new space,” due to the need for a new building foundation. This is part of the first phase of the two-phase project to improve Spaulding Hall, with phase one being the 50,000-foot expansion on the side of Spaulding that faces Academic Way. As has been previously reported, these updates are welcome, as Spaulding Hall has not seen significant renovation since its construction in 1960.

“All the work through the summer of 2021 is focused on the expansion,” Bencks said. Phase one is set to be completed in the 2021 summer, with the renovations to the current Spaulding building to be started at a later date.

As for the various methods being used, blasting “requires the setting of explosives, a very short blast, and then removing” the resulting rock pieces, said Bencks in an email. It is a fast process, but it has been disruptive to buildings surrounding the construction site. In contrast, hoe ramming involves a large, jackhammer-like tool attached to a Caterpillar Excavator that drills into the rock. Bencks said that it “is a very slow process that removes rock in smaller pieces.”

The method used depends on the context and the placement of the rock requiring removal.

“When rock is very close to buildings, we typically hoe ram,” Bencks said. “When the rock is further away, we typically blast as it is quicker and less expensive.”

This rock removal is necessary because “[m]ost of the land on our campus is either rock that requires removal or clay that is not stable for foundations.” Bencks said this “requires driving long lengths of steel deep into the ground to reach more stable bedrock.” As for the amount of rock that necessitates removal, this varies from project to project, according to Bencks, as well as depending on the “relationship of the rock to buildings and utilities.”

Unfortunately, “there’s no quiet way to remove rock,” according to Bencks. “There are noise and vibration disruptions with both techniques—blasting is loud, but of very short durations…hoe ramming is not as loud but is continual.”

After hoe ramming is finished and excavation is complete, “they will start preparing the concrete foundations,” said Bencks. Following this, they will construct the steel frame and enclose the building with wall components, and then “begin putting all the guts in,” guts meaning plumbing, wiring, et cetera.

Bencks said they are “less than 10 percent in to construction for the expansion,” adding that it “will be ready for move in during the summer of 2021.”

In other words, “the project is on schedule,” according to Bencks.