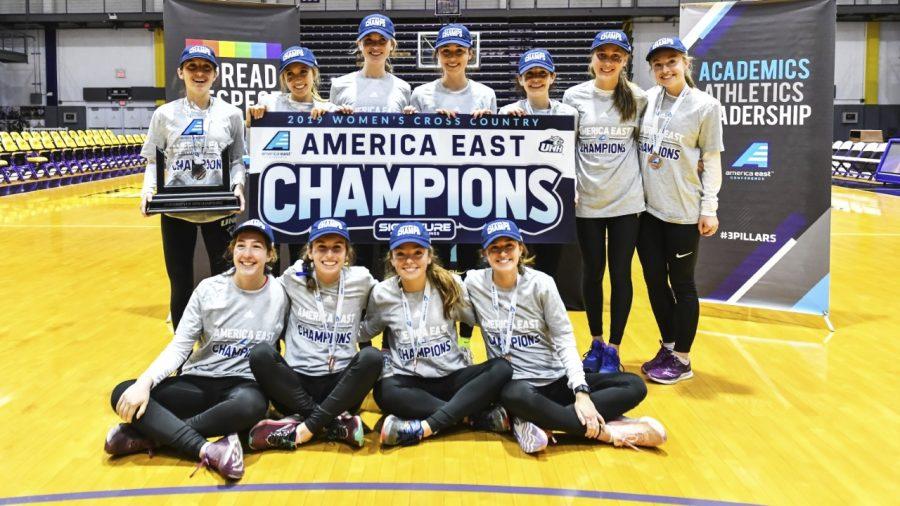 The UNH women’s cross-country team continued their successful season by winning their sixth America East cross-country championship in the past seven years. They finished with a team score of 30, the best since they won in 2014 with a score of 26. The men’s team also had a successful day as they took fourth place, their highest finish in the meet since 2016. The men’s team had a team score of 95.

The women’s head coach Robert Hoppler said it would be a competitive meet. He commented on his team’s competition: UAlbany, Stony Brook and UVM. He said that UAlbany was running on their home course as the defending champions, Stonybrook is “a perennial powerhouse” and noted that UVM also had a solid team. He also was very pleased with how the team has prepared since the summer.

“We had to run very well to beat those teams, so I think it was an accomplishment as to how hard and competitive this group ran…they raced great,” Hoppler said.

The women’s victory was spearheaded by junior Elisabeth Danis, the individual runner-up in the race. She placed second overall in the 5K and ran 16:55.22. Next up was senior Shannon Murdock who finished in the top five in this meet for the second time of her career. Her first top-five finish was in 2017 when she was the runner up. This time she placed third overall, running the course in 16:59.09. Finishing after her was senior Margaret Champagne who ran 17:13.84 and rounded out the top five overall finishers. These three runners were all named to the 2019 All-Conference First Team.

Murdock was also awarded with the Elite-18 award which is given out to the top finisher with the highest GPA. The award combines both academic prowess and athletic performance.

The fourth runner to finish in the top 10 for UNH was first-year runner Lauren Dean who ran 17:33.35 and took ninth overall. After the top four came a pack of five runners who all came within 1.24 seconds of each other and in that pack was Wildcat junior Cayla Barretto and sophomore Nicole Yeomans. Barretto ran 17:40.94 to take 11th and Yeomans ran 17:41.38 to place 13th. Rounding out the scoring for the Wildcats was junior Caroline Mahoney in 17th place, finishing the course in 17:47.69.

Dean, Barretto and Yeomans were all selected for the 2019 All-Conference Second Team. The Wildcats were the only team to have all of their scoring runners finish in the top 20. According to Hoppler, the meet went exactly as they planned.

The Wildcats, who are ranked seventh in the region will have their next meet on Nov. 15 at the NCAA Regional Championships in Buffalo, N.Y. Coach Hoppler said he looks forward to running in a very competitive meet and feels confident the team will compete well.

The men’s team was once again led by senior Nicolas Sevilla-Connelly as he took fifth overall, running the 8K in 24:06.15. It was his best time at the America East Championships, and he was also selected for the 2019 All-Conference First Team for the first time in his career. According to head coach Jim Boulanger, that time gives Sevilla-Connelly one of the top five fastest times for the 8K in school history.

Junior James Wilkes finished 12th overall with a time of 24:25.72, a new personal best for him. After him was first-year runner Forest MacKenzie, who finished 25th overall with a time of 24:53.70, and not far behind him was senior Alexander Saveliev running 24:56.44. He took 26th overall. Since Stony Brook already had nine runners finish, MacKenzie and Saveliev finished in scoring positions 23 and 24 respectively. Senior Samuel Lanternier finished 31 for the team and ran 25:10.47. Senior Nicholas Brown and junior Aidan Sullivan rounded out the scoring for the Wildcats with times of 25:21.32 and 25:21.70 and scoring 34 and 36 points.

Coach Boulanger was happy with how they ran and mentioned that most of them had personal bests. He also said that the only runner to not record a personal best, Sullivan, only missed their previous time by a few seconds. Boulanger said that Sullivan hurt his hamstring early on in the race, which affected the team score a little, he was still able to finish the race and end up in the top 40 in a race that featured 85 runners.

“I felt very good about how they raced, how they gave their effort, how they carried themselves. It was very nice,” Boulanger said.

Boulanger was also very happy that the team was able to get back into conversations about the contenders, noting that in previous years it was mostly just the lead runner who was talked about by other teams. He hopes to keep developing the program and continue the work that the current team puts in. He had nothing but praise for his runners.

“They want to be good; they want to stay one of the ranked teams in the East, in the region.”

The men’s team will look to keep that mentality when they compete next at the NCAA Regional Championships on Nov. 15.