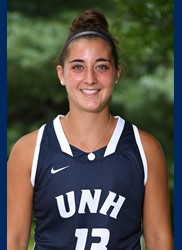 Tori Palumbo, a two-sport athlete at the University of New Hampshire (UNH). Palumbo is currently an undeclared sophomore in the Paul College of Business and Economics at UNH. To her, the business world and how it works is interesting, along with information systems and data analytics. Palumbo is currently taking four classes, but in the past, she took three classes to ease her workload because she was playing two sports – she had to take a summer class to stay on track with her major.

On Memorial Field for field hockey, Palumbo’s number is 13 and plays midfield, a difference from playing defense on the ice.

The field hockey season “is going very well,” according to her, adding that her team will be heading to Monmouth University on Nov. 5 for playoffs. Currently, they are the third seed in their division and will play UC Berkeley.

“As a team, we have had a goal to win American East Championship,” she said. “A personal goal I have for myself going into playoffs is just to never give up.”

Palumbo chose to go to school at UNH to pursue her sports career and to “get an excellent education,” adding “I am not exactly sure what I want to do after college but definitely something in the business world.”

“Being a two-sport athlete was amazing,” she said. “The opportunity to plat both sports was a dream come true. It allowed me to have two teams of friends and support. I learned how to push myself in different ways in both sports.”