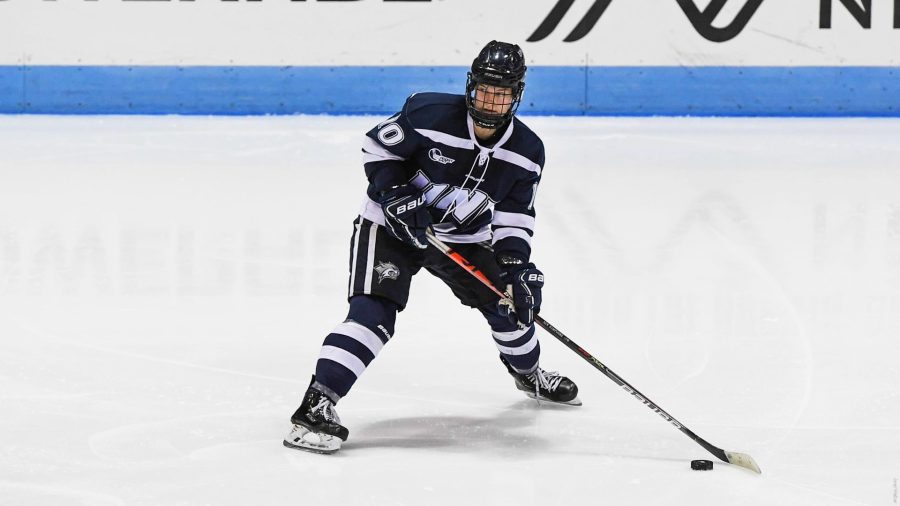 On Friday, the rival Black Bears were the first team to shut out the Wildcats in their 3-0 win. The game started with a high-tempo shift from UNH’s second line, creating a couple turnovers, but after that UMaine started to take control of the game. They led in shots 12-3 after the first period, but the game remained scoreless. Both teams had a high-quality scoring opportunity in the period, as UMaine had a puck trickling in the crease but junior defense woman Julia Scammell swiped the puck away and out of the zone. UNH got their big opportunity with just over three minutes left in the period. UMaine’s goalie had the puck somewhat covered between her pad and the post and UNH forwards converged to the net trying to poke the puck loose and in the net. The puck did end up in the net, but the whistle already blew and play was signaled as dead.

Although UNH dictated the majority of the play in the second period, the Black Bears got the only goal of the period. Sophomore forward Tereza Vanisova of the Black Bears was the one who opened up the scoring late in the second period. She rushed up ice along the boards into the offensive zone, and at the faceoff dot she cut to the middle of the ice unopposed and lifted a shot up and over the shoulder of UNH sophomore goalie Ava Boutilier.

In the third period, play started to get pretty chippy between the two rivals. The period featured a big net-front scrum after a whistle four minutes into the period. It resulted in the two teams each taking minor penalties. The Black Bears increased their lead to 2-0 just 9:32 into the period off a very similar play as the first goal. This time it was sophomore forward Vendula Pribylova who skated up the wing unopposed, and she cut towards the middle of the ice at the bottom of the faceoff circle and backhanded a shot in the net off the crossbar. The puck just barely crossed the goal line.

With three minutes left, UNH went on the powerplay with a huge opportunity to get on the board. At this moment, they pulled their goalie for the extra attacker. In the end it did not help, and UMaine sealed the game with an empty net goal halfway through their penalty kill to make it a 3-0 game. Despite the loss, Boutilier managed to keep the game within reach for the Wildcats stopping 28 of the 30 shots she faced.

“They took it to us for sure which we gotta learn from,” Turner said after the game. She mentioned how the team lost a little bit of the gritty mentality they had in previous weeks and said the team would need to get back to that kind of mentality.

Despite the loss, head coach Hillary Witt was not overly worried, saying that the team just had to “keep plugging away.” She noted that it is a long season and the team would have “ups and downs.” Coach Witt said she thought her team worked hard but said they needed to make more plays.

The Wildcats responded well to the loss by scoring six goals the next day against Providence. They started the scoring just a minute and a half into the game. Junior defense woman Maddie Truax sent a pass to Turner behind the net and she sent a pass to the front of the net, finding sophomore defense woman Talli Warren who then tipped the pass between the goaltender’s legs. The Friars tied it up 13:28 into the first period off an offensive rush and a shot that was deposited in the top of the net.

Providence took their only lead of the game 17:54 into the period while on the powerplay. After that goal, Boutilier put up a wall and stopped every shot that came her way. In the final minute of the period, UNH tied it up on a two-on-one after a breakout pass from senior forward Nicole Dunbar. Senior captain and forward Taylor Wenzcowski had a give and go with sophomore forward Lauren Martin who went in and made a quick forehand to backhand deke on the goalie.

Martin scored the only goal of the second period, her second of the game on the powerplay. Wenczkowski won the faceoff with first-year forward Annie Berry tipping the puck up to Martin at the point. She took a shot, which deflected off a defender’s stick and into the net.

The Wildcats scored another powerplay goal just 38 seconds into the third period. Turner took a drop pass from senior captain and defense woman Tori Howran and beat the goaltender clean with the shot, extending the lead to two.

Senior forward Meghara McManus gave the Wildcats a three-goal lead after she took a shot from the point that made its way through traffic and into the net. First-year forward Jada Christian picked up the lone assist on the goal. Turner scored her second goal of the game on another powerplay, burying the rebound off a shot from sophomore defense woman Emily Rickwood. Howran picked up the secondary assist and that was her second point of the game.

Although the Wildcats offense put up big numbers, it was Boutilier who sparked the victory, stopping 32 of 34 shots that came her way. Turner finished the game with three points to give her a team leading 11 points. She is also tied with McManus for the team lead in goals with five.

The Wildcats next game is Friday, Nov. 1 at Boston College at 2 p.m. They will be back at home two days later to host Holy Cross.