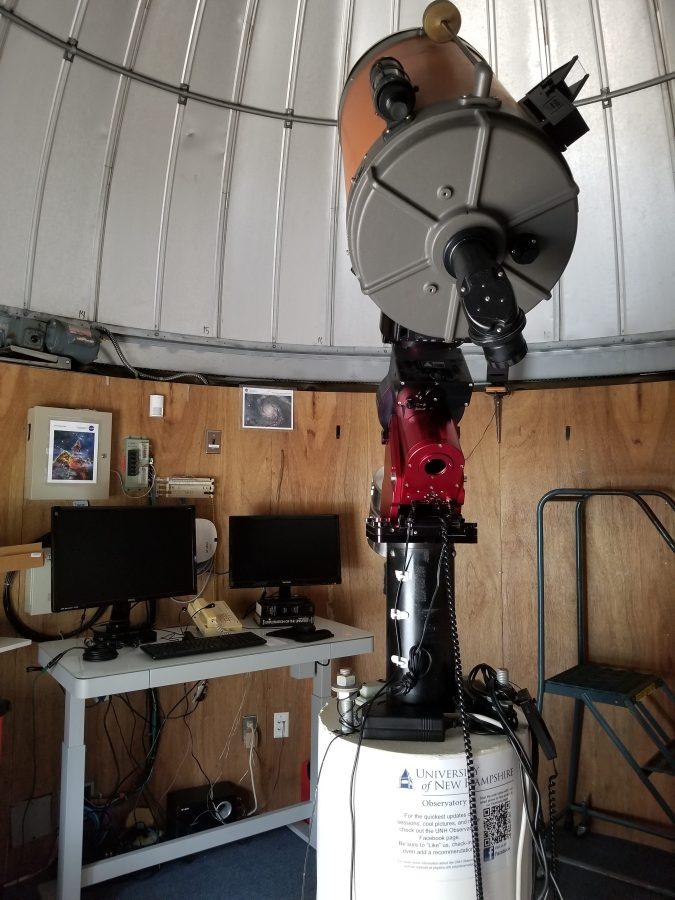 About 20 people gathered on the west edge of campus on the way to Woodman Horticultural Farm this past Saturday. They gathered at a small domed structure on the edge of the Contractor Lot and Spinney Lane: The University of New Hampshire (UNH) Observatory. They were there for a public viewing session, one of many held throughout the year. The session started at 8 p.m.

The UNH Observatory is part of the Department of Physics and Astronomy in the College of Engineering and Physical Sciences. The department was renamed last year, John Gianforte, an instructor of astronomy and the director of the observatory, said, as part of the department’s recent focus on astronomy.

The observatory has not always been at its location off Spinney Lane. Gianforte said that it was first in Boulder Field in 1986, for two purposes: to watch Halley’s Comet, a comet that appears approximately every 75 to 76 years. The Boulder Field location was popular for viewing Halley’s Comet.

“We had people lined up through the snow, all the way from the observatory, all the way to the street.” Gianforte said.

The observatory was also built to have a permanent location for the main telescope, which has a 14-inch lens radius and is about two feet long.

This telescope used to be “stored under the stairwell in the old DeMeritt Hall, and it was heavy. It was bulky, hard to carry and a major pain… You had to have at least three people [to carry it].” Gianforte said. “Having a permanently mounted telescope that’s almost ready to go as soon as you open the door increased the efficiency of labs and public sessions tremendously.” Gianforte said that the old system of carrying the telescope outside would take over an hour just to get the telescope running in the field.

Not only does the observatory allow quick setup, it can also quickly rotate the telescope to view different objects in the sky. When the public viewing session on Saturday began, Dominic Andreoli, the manager of the observatory, entered the observatory, which has a radius of approximately 10 feet. He walked to one of two computers set up inside, each with a filter over their screens, casting a red shadow—electronic blue light disrupts night vision, while red light does not.

Using an astronomy program called SkyX Professional, he identified the constellation of Capricorn. The telescope moved, a motor orienting its lens towards Capricorn. A volunteer pressed switches on the telescope’s cement base, and the dome itself clanked, rotating: the dome has an opening to allow the telescope to peer outside. Throughout the night, observatory volunteers repeated this process, each time taking only one to two minutes.

Volunteers were ubiquitous at this Saturday’s viewing session, as Andreoli explained that these volunteers—all students—had earlier in the semester expressed interest in working at the observatory, and came early to this Saturday’s session to learn about set-up.

Public sessions are not the only use of the observatory. The observatory hosts private sessions, with groups such as Girl Scouts and Boy Scouts, student organizations and a marriage proposal.

The observatory moved to its current location in 2004, Gianforte said.

“They gave us a little bit of money to relocate the observatory. [The College of Life Sciences and Agriculture] gave us some land on the west edge of campus,” he said.

Though Gianforte said this current location is “less accessible” to students than the Boulder Field location, he noted that students are still able to access the current location through a variety of methods including buses, biking, walking and driving.

The observatory’s current home marks an improvement over Boulder Field, Gianforte said, for a multitude of reasons. The location better blocks the light pollution from downtown thanks to the trees surrounding three sides of the observatory; and for the side facing the parking lot, Gianforte and others can turn off streetlamps around the parking lot during viewings. Another perk of this location is its wildlife, he said, as the Durham Reservoir runs behind the observatory as forests loom beyond open fields.

During the first half hour of the session, many people stayed outside the observatory, examining the constellation and stars out. Most people were volunteers, but some other students and members of the public were there. Zane Ranabi, an undergraduate at Bates College, was visiting his boyfriend who is a UNH undergraduate, and excitedly discussed the constellations and astronomical objects present, making sure to view the objects through the telescope.

Andreoli and Ranabi both used laser pointers with visible beams to indicate constellations, describing the Greek mythology behind the naming and story of constellations. This mythology knowledge, Andreoli said, he picked up over time, having been involved in observatory public outreach since he was an undergraduate at another university.

As the volunteers rotated the telescope, Andreoli advertised the transit of Mercury, which Gianforte had also discussed. On Nov. 11, Mercury will “transit” or move between the sun and earth, appearing to cross the sun. Andreoli and Gianforte will celebrate that event by bringing telescopes to the Henry Law Park in Dover at 7 a.m., moving to DeMeritt Hall around noon to finish watching the transit.

Around 9 p.m., Andreoli stepped inside the observatory and changed the eyepiece of the telescope. He explained that the eyepiece is part of what determines the telescope’s magnification capabilities. Changing it out allows observing objects previously not viewable.

As the night wore on, volunteers and visitors headed inside the observatory, which offered refuge from the wind and created an incubation chamber for everyone’s body heat—it was approximately 48 degrees Fahrenheit outside. Yet, the observatory was minimally effective at trapping heat—no one took off any coats or hats. After all, both the observatory door and the dome were wide open.

The night ended with a look at Polaris, also commonly known as the North Star. Over the night, the telescope had focused on a variety of objects—from galaxies, to stars, to star clusters, to planets like Neptune and Uranus. After everyone had viewed Polaris, the volunteers stayed behind to close the observatory.

Public viewings are every two weeks, or twice a month—the first and third Saturdays, Gianforte said. Viewings are weather-dependent, and until March they will run 8-10 p.m.; at which point they’ll switch to 9-11 p.m.. A few hours before each scheduled viewing, there will be a message posted on the observatory’s Facebook page to confirm weather and if the viewing will occur.