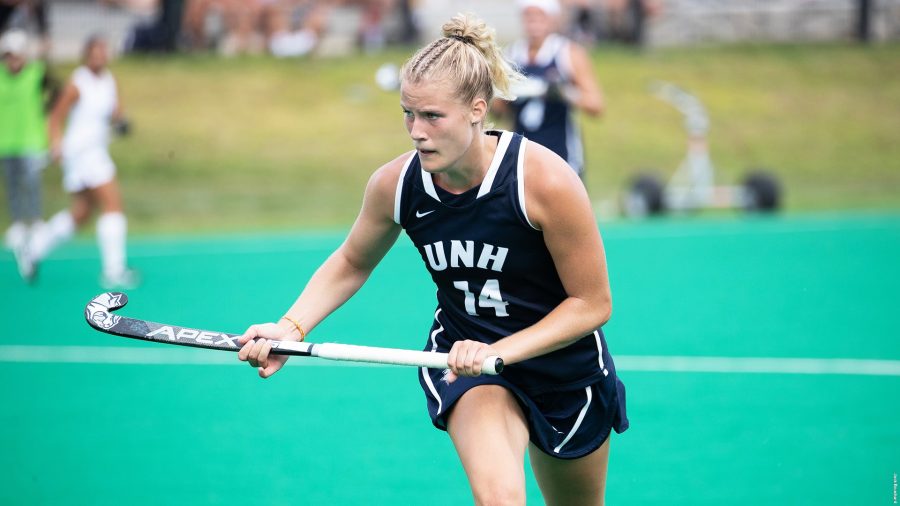 The UNH field hockey looked to find their stride moving into the later portion of the second half of their season this past weekend.

To start the long weekend, UNH would travel to Albany, NY to take on Conference Juggernaut #21 UAlbany.

In the first Quarter, UAlbany came out strong as they recorded a 4-1 shot advantage. First-year goalkeeper Jemma Woods was able to knock all four shots away for UNH to keep the game scoreless into the second quarter.

Quickly recovering in the second, UNH was able to turn a corner into a goal as Senior midfielder Kayla Sliz was able to convert a corner off a pass from junior midfielder Bloem van den Brekel one minute into the quarter. The Wildcats kept the pressure on, barely missing on a couple more tries. Then, a few minutes later, they were able to strike again as van den Brekel rifled one from the top of the circle. Later on in the quarter, first-year forward Ava Mariani was able to score on a rebound to put the wildcats up 3-0 to finish off the second. UNH led the quarter in shots with eight total.

The third quarter turned out to be a quiet one for UNH. After an intense second period, UAlbany was able to score three minutes into the second half. They would also limit UNH to zero shots.

UAlbany was quick to attack again in the fourth quarter. After a missed corner by UNH, they were able to score on a rebound to pull within one. Just a few minutes later, near the 50-minute mark, UAlbany tied the game up with the momentum clearly on their side. The Great Danes would continue to pressure UNH with a near miss and a corner opportunity late in the period, but none of the opportunities led to a goal.

The first overtime was mostly uneventful for both sides. UNH limited UAlbany’s shots with some great defense. The ‘Cats would also record three shots on net.

Into the second overtime, UNH would gain more momentum as they put the pressure on early. UAlbany would answer back with a span of three minutes on UNH’s side of the field. Ultimately Mariani would score the game winner for the ‘Cats with close to two minutes remaining.

This was a big win for UNH as they notched one of their best wins of the season.

Moving to Sunday, UNH was on the road again as they took on Providence in Rhode Island.

The defenses for both teams were strong to start. In the first quarter, both teams recorded only one shot.

Into the third quarter, UNH would find life. With an action-packed start, UNH’s senior forward Bailey Fanikos would score to bring the Wildcats within one. UNH would record seven of their own shots to Providence’s one.

It all fell apart for the ‘Cats in the fourth quarter as Providence would score two goals with just one minute separating them. UNH would only record one shot in the final frame.

The 4-1 loss pushes UNH to 7-6 on the year. This weekend they look to find stability again as they take on UMASS Lowell and #13 ranked Boston College at home.