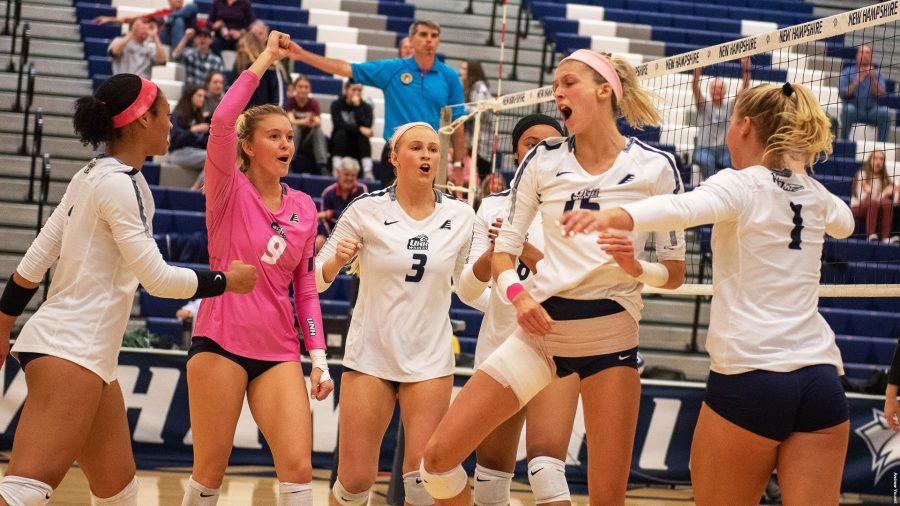 The ‘Cats rolled past a Binghamton team that has struggled to gain traction in 2019. In their 16 games, Binghamton has won a total of five sets while dropping a whopping 48 sets. That trend remained as UNH destroyed the Bearcats 3-0.

The first set began as if UNH was going to power through Binghamton quickly, but the Bearcats held their own by tying the game at 20 despite UNH jumping out to a 5-1 lead. Senior right-side hitter Hannah Petke led the way as the Wildcats closed out the set, taking part in a combined block kill with sophomore middle blocker Abby Sullivan to bring the score to 23-20. Petke also got a kill to put UNH ahead 24-22. Binghamton won the next point, then served out of bounds to end the set.

Senior libero Emily Tanski accelerated the ‘Cats to a 4-1 lead to start the set, as her serve consistently got the Bearcats out of system, thus setting up UNH for easy offense. Binghamton found a groove as they put together a 4-0 run.

After Binghamton grabbed a 12-11 lead, UNH set out on 7-1 run extending their lead to 18-13 courtesy of dominant blocking from Petke and Sullivan. First-year middle blocker Bre Smith also got in on the action, playing an extended role in place of usual starting middle blocker, first-year Hannah Crist.

UNH head coach Chris Feliciano praised Smith for her ability to play well on short notice. “(Smith) is someone that is constantly working…She hasn’t had as many opportunities as she’d like, but the moments that she has gotten in she’s shown a lot of positivity and we hope she can continue that trend.”

The combined blocks of Petke and Sullivan in addition to Smith and first year right-side Erin Hedrick’s block continued to dominate the net on route to a 25-21 victory in the second set.

The third set began with a four-point run on the back of senior defensive specialist Logan Welti’s serve. Dominant serving proved to be a main factor in UNH’s dominant third set. Senior outside hitter had a succession of aces and strong serves for a run of her own, eventually working toward a 25-11 win to close out the match.

UNH never let up despite facing a struggling opponent. Feliciano showed his appreciation for the Wildcat’s consistent effort.

“We’ve had a great season so far, the girls have worked tremendously hard, but we’ve talked a lot about leaving the gym with a sense of satisfaction. To Binghamton’s credit, they’re a good tough team. I think they are a better team than their record indicates.”