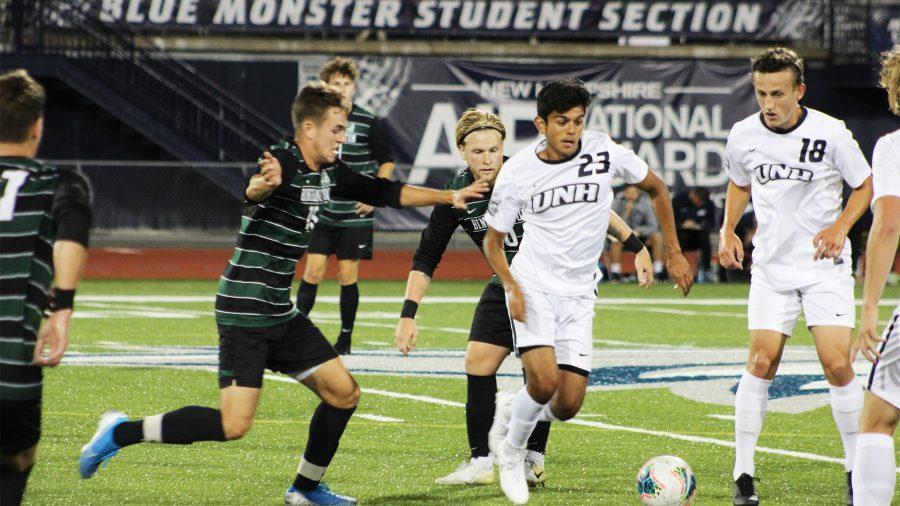 The UNH men’s soccer team traveled to Baltimore, Maryland on Saturday, Oct. 12 to play their third America East conference game of the year against the UMBC Retrievers (4-5-1).

UNH narrowly won the game thanks to a second-half goal from senior midfielder Antonio Colacci in the 48th minute, keeping their undefeated season alive. This was Colacci’s fourth goal on the season. With this goal, he also took the team lead in total points with 11, two ahead of Fabian Lutz who has nine.

Per usual, the Wildcats’ defense held their opponent to less than ten shots in the game. This was the ninth game in a row that the ‘Cats accomplished this feat. UNH’s stellar play on defense has propelled the Wildcats to the #5 team in the nation in terms of team goals-against average at 0.43.

UNH is not a team with a superstar player. There is only one player with a double-digit point total and there are nine players with at least four points on the season. A lot of teams need a great player to be successful, but the beauty of UNH is that they can get something from anyone of their players at any time. Their collective nature makes them very dangerous as a team overall.

Coming up this Saturday, Oct. 19, the men’s soccer team will travel to Lowell, Mass. for potentially their biggest test of 2019. The Wildcats will take on UMass Lowell who has played to a 7-3-1 record in 2019. This is the toughest opponent UNH has come across. UMass Lowell is 2-1 in conference play, as they suffered their first conference loss to UAlbany on Saturday.

The upcoming games after UMass Lowell are interesting matchups. The Cats’ will face-off against Harvard and Hartford. Harvard might be the worst opponent UNH takes on all year as they have played to a 0-7-1 record so far. On the other hand, Hartford will most likely take over UMass Lowell and become UNH’s most challenging opponent to date as they’re 7-2-3 on the year and are undefeated in America East play.

In general, the more difficult games are coming up at end of UNH’s schedule. In terms of conference play, they ‘Cats have already taken on the three worst teams in the America East in UMBC, Binghamton and Stony Brook. The rest of their schedule, outside of Harvard, will be against America East opponents with records above .500.