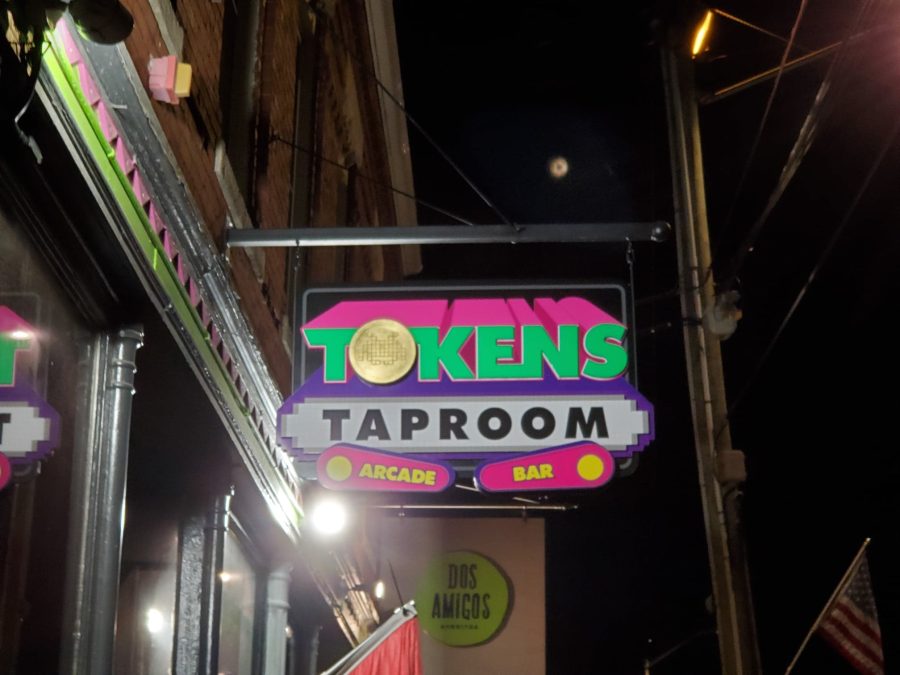 “Elongate your arm!” I hear my dad say behind me. I am 8 years old and playing a Skee-Ball game at Newport Beach, trying my hardest to beat my sister.

“Focus on your aim!”

My dad, having worked at the Skee-Ball factory, always imported his wisdom on us when we played the game.

Flash forward 13 years and I’m playing Skee-Ball at Tokens Taproom against my roommate and boyfriend, scoring 40 and 50 points at a time, although never getting the elusive 100.

I am absolutely kicking their ass.

The only bar around the University of New Hampshire (UNH) that lets me have a nice drink, grab a snack and beat my friends at old school videogames is Tokens. Located in Dover, it is only a 15-minute drive from campus. The first thing you notice when you walk around is all the sounds coming from the pinball machines, as well as the sound of people shrieking and laughing as they try to avoid enemies in Pac-Man and Super Mario Bros.

The bar is right in front when you walk in, so you can quickly order a drink or snack. The one downside about the food is that it’s pretty hard to eat something with one hand and play a video game with the other, but the bar offers games like Mario Kart and Super Smash Bros. on their TVs. The menu isn’t extensive, it only consists of paninis, hot dogs, snacks and soft drinks, but the food gives you the boost you need to take down your enemies.

Their beer list, however, is much more extensive. The list of local beers ranges from a Tuckerman and UNH Brewing collaboration titled 1866, to Maine Beer Company Peeper Ale. There are lagers, Belgian-style wheat, ciders, pale ales, porters and lots of other types to pick from, giving options to the most finicky of beer drinkers. If you don’t like beer, there’s lots of classic soft drinks to pick from as well. All the games have cup holders and some games have small tables next to them to rest your things while you play, so unlike the food, you can take your drink anywhere in the arcade.

Once you have a drink in hand and you’re full from snacks, you can begin exploring all the ancient games Tokens has to offer. There are classics, such as Space Invaders, Super Mario Bros., Pac-Man and Mortal Kombat, as well as more obscure games like Teenage Mutant Ninja Turtles, Rampage and Time Crisis. Many of the games offered at Tokens date back to before many UNH students were even a thought in their parents mind, but they still invoke a strong sense of nostalgia. There are pinball machines of every theme, ranging from Star Trek and Indiana Jones to Kiss and Aerosmith.

My personal favorite game besides Skee-Ball is The Simpsons, an arcade game from the late 1980s, where Maggie is stolen and you can play as different characters to get her back. Not only is it fun button mashing, but you can play it with three other people at once, which makes it a great group activity. I have still not passed level two, however, even with a four-person team.

Unlike traditional arcades, Tokens doesn’t give out tickets or prizes. I enjoy this aspect of it because it makes you want to play for the fun of it, not just to get a prize at the end. The pinball machines are three tokens, but every other game is only one or two tokens, which means that five dollars’ worth of tokens can go a long way.

Tokens Taproom is located at 282 Central Ave. in Dover. The absolute biggest drawback is that you must be 21 or older to enter. The only time minors are allowed is Saturdays from 11:30 a.m. to 4 p.m. If you are of age though, the taproom stays open until midnight Monday through Thursday and 1 a.m. on Friday and Saturday, giving you ample time to play to your heart’s content, or beat your friends at Skee-Ball.