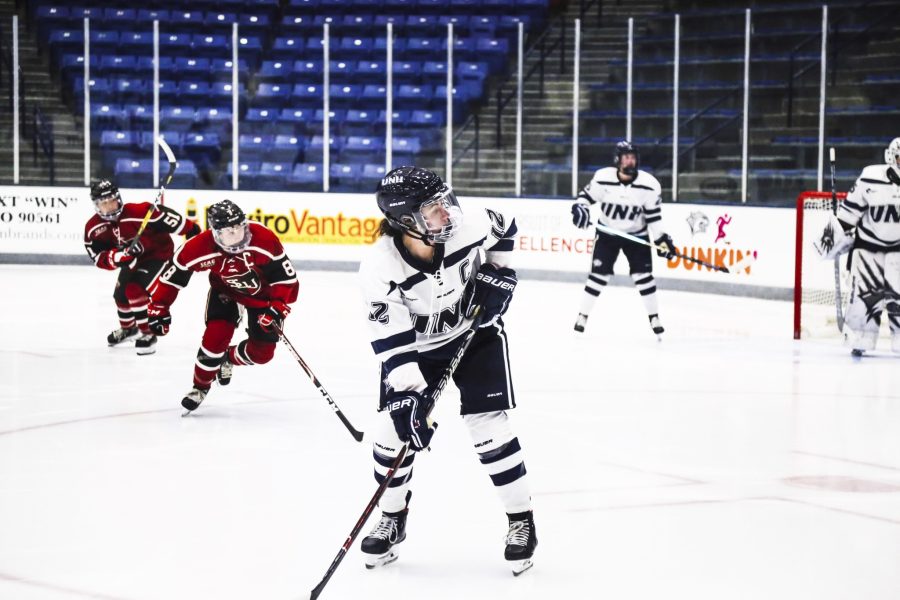 The first game started off in a defensive battle, and neither team was able to get much sustained pressure in the first period. Due to this, the goalies did not get tested much.

In the second period, St. Lawrence started to take over. They scored a powerplay goal just 1:21 into the period off a shot that was blocked and then got put on net because of a ricocheting rebound. It was overall a rough period for the Wildcats, and they did get one good scoring opportunity. Senior captain Carlee Turner wrapped a pass behind the net to senior Meghara McManus, who then sent a pass to senior captain Taylor Wenzcowski who was wide open right at the hash marks. Her shot was saved and deflected out of play.

With a minute and a half left in the second, St. Lawrence first-year defender Rachel Teslak sent a puck into the zone which got tipped by first-year forward Anna Segedi to senior forward Kayla Vespa. Vespa moved to the front of the net and sent a pass back to Segedi who shot and scored to make it 2-0.

Segedi scored the third goal of the game off a net front scramble after a shot from first-year goalie Shailynn Snow that was saved.

The lone UNH goal came on the powerplay 18:25 into the third period. Senior forward and captain Taylor Wenczkowski gave a pass along the blue line to the other captain, senior defender Tori Howran, and she took a shot that went off the goalie’s pad and right to sophomore defender Emily Rickwood who finished on the rebound to put the Wildcats on the board with her first career goal. St. Lawrence would score nine seconds later off an empty net goal from Segedi, who completed her first career hat trick.

The second game was much better for the Wildcats, which ended in a 5-5 tie after a thrilling overtime. Segedi started off the scoring for St. Lawrence, scoring their first two goals. Her second goal was scored after getting her own rebound. The Wildcats would answer just over a minute later with junior forward Paige Ryne. She pulled off a wrap-around from behind the net and the puck somehow bounced in the net off the goalie’s shoulder. First-year forward Tamara Thierus got the only assist on the goal.

Just under four minutes into the second period, St. Lawrence would regain the two-goal lead off a powerplay goal. This was before UNH would pot four unanswered goals. Turner started it off carrying the puck in a two-on-one situation and she took a shot that beat the goalie clean on the glove side to bring the ‘Cats back to within one. Thierus picked up her second assist of the game on the goal. Just 26 seconds later McManus would score the tying goal, stuffing a rebound as she was falling down with sophomore defender Talli Warren and sophomore forward Lauren Martin assisting.

At 15:11 into the period, Rynne would give the Wildcats the lead with her second goal of the game. Martin centered a pass to her right out in the slot, and Rynne shot the puck and scored off her own rebound. With just over a minute left in the period the Wildcats struck on the powerplay to make it 5-3. Wenczkowski passed the puck up to Howran who passed to Rickwood. She took a shot from the faceoff circle and beat the goalie five hole, giving her goals in two consecutive games. That goal prompted a goalie change for St. Lawrence.

With about 4:20 left in the third period, St. Lawrence pulled their goalie for the extra attacker and it worked as they would end up tying the game with two goals just a minute and a half apart. One of them beat sophomore goalie Ava Boutilier clean and one that found its way through a lot of traffic out front of the net.

Due to the tie score, the game went to a five-minute overtime and the Wildcats got a chance on the powerplay. They had plenty of high-quality chances but were unable to put one home, so the game ended in a tie. Boutilier ended the game with 30 saves including a breakaway stop 5:30 into the game and a huge pad stop off a point-blank shot on the penalty kill early in the third.

Head coach Hillary Witt felt that this game was better than the first and liked how the team rebounded. She also thought the defense played better but also that there is still work to do.

“I thought Lauren Martin’s line really stepped up, and as we need them to, our line of Turner, McManus and Wenzcowski they really helped us out today. (They are) people we rely on so I thought it was a good job,” Coach Witt said after the game on Friday.

The Wildcats will be back in action Friday, October 11 at UConn for their first conference game of the season.