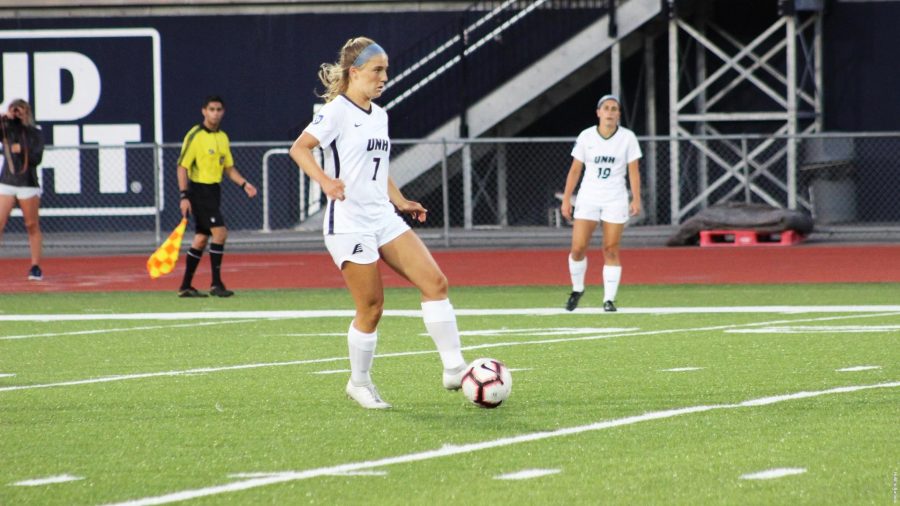 The Wildcats were able to avenge their loss against UVM in 2018 where they got blanked 2-0 in Durham, a game that they wished they had back at the end of the season.

In Sunday’s matchup, action started early. It was a back and forth affair for the first 20 minutes of the match with no legitimate goal chances. When the clock hit the 20th minute, the inability to finish subsided and UNH senior forward Ally Reynolds capitalized on a scoring chance.

The sequence started with a mishandled save by UVM junior goalkeeper Kacey Lambertson. She redirected the ball right to Reynolds’, who was able to maneuver herself and the ball around a pack of Catamounts that got entwisted together. This allowed her to get a clear angle toward the goal which paid off as she was able to chip in her team-leading fourth goal of the season.

This was the first of three goals that were scored in a crazy five-minute series of events from the 20th to the 25th minute. The second of those goals was scored just a minute after Reynolds’ by UVM sophomore forward Natalie Durieux off a set piece about two yards outside of the 18-yard box. UNH sophomore goalkeeper Cat Sheppard seemed to have good placement in order to make the save, but the shot was too quick for her outstretched arms.

The last of the trifecta was a beauty. In the 25th minute UNH first-year midfielder/forward Whitney Wiley took on a defender, beat the defender, and unloaded a 25-plus yard shot that sailed over the head of Lambertson and into the net. This was would be the last score of the match.

UNH head coach Steve Welham thought his team fought hard in this sequence, and he believes the proximity of the goals had a lot to do with the competitive nature of the game.

“This is definitely of a game of momentum. There’s a lot to be said with goals scored within a two-minute window of each other,” Welham said.

Composure was also a characteristic that Welham saw in his group on Sunday and he specifically was impressed when they scored minutes after UVM’s equalizer.

“At that point (the score) was 0-0 again, they stepped up, so we had to play again. We felt like we had a couple more opportunities that we didn’t capitalize on, but you have to play the game start to finish, and that’s what we did,” Welham said.

The composure of the Wildcats has led them to a 4-1 record after losses in 2019, and Wiley, the stand-out newcomer, has been a big part of that according to her head coach.

“She is very composed, technical player. She is very thoughtful and creative. She has the ability and license to kind of roam in the attacking zone…and also has the ability to slot balls through for our strikers on the attack. She brings a lot of versatility and certainly a lot of different dimensions to our team,” Welham said.

The only serious chance the Catamounts were able to generate in the second half was in the 73rd minute when a corner kick went in their favor. When the corner kick was centered, it deflected off multiple players and ended up in front of the net where UVM first-year forward Nicky Constant was able to one-time a strike towards Sheppard. The Wildcat goalkeeper was able to deflect the ball just enough to keep it from hitting the back of the net.

UNH women’s soccer will have their senior game this Sunday in Wildcat Stadium at 2 p.m. to celebrate their 10 seniors and all their contributions to the program. They will be facing a good UAlbany squad that Welham and the Wildcats have a lot of respect for.

“(Albany) is obviously the defending champions…they are going to come out ready. There is no question they are a very good team. They are organized and they understand every game is important.”