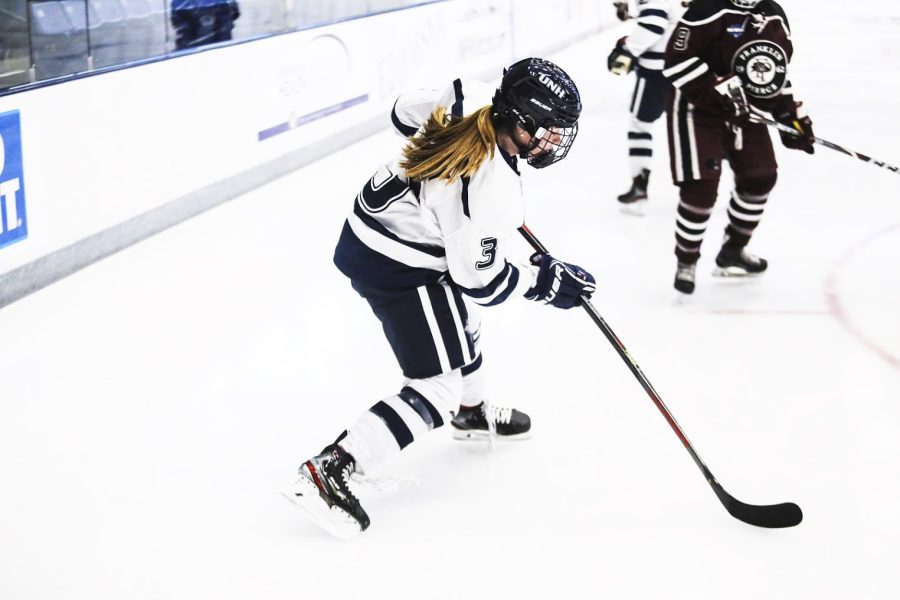 The women’s hockey team (1-0) started their season with a big 6-0 win over Franklin Pierce Ravens (0-1) on Sunday. The Wildcats had six different goal scorers, five players with a multipoint game and 11 total players picking up at least one point. Seniors Meghara McManus, Carlee Turner and Taylor Wenzcowski led the way with each player putting up a goal and two assists. The Wildcats also outshot the Ravens 59-14 and 29 of those shots came in the second period.

The Wildcats took control of the game early on, dominating possession in the offensive zone. They were able to pick apart the Ravens defense all game with crafty and precise passing, creating plenty of high-quality chances. It took the Wildcats until the final minute of the first period to get on the scoreboard. While on the powerplay, McManus made a quick deke below the goal line and then sent a backhand pass to Wenzcowski in the slot, who buried a one timer for UNH’s first goal of the season. Turner also picked up and assist on the goal.

Turner said that it was a little bit of a rough start, but as the game got going they got better and they “really brought it by the second period.”

The Wildcats exploded with three goals in the first three minutes of the second period, with the first of which coming on a powerplay. Wenzcowski and McManus were passing the puck around behind the net before Wenzcowski set up Turner in the slot to double the lead just 42 seconds into the period. Shortly after senior forward Nicole Dunbar took a shot from the point that found its way through traffic into the net to make the score 3-0. Junior forward Grace Middleton and sophomore defenseman Talli Warren picked up the assists on that goal.

McManus made it 5-0 when she collected pass from Turner who was in the corner, who found McManus wide open just above the crease. Wezncowski picked up the secondary assist, giving all three players on that line three points.

With one-minute left in the second period Thierus entered the offensive zone and put a shot on net and both Rynne and sophomore forward Lauren Martin took swipes at the round, but Martin’s second attempt found its way into the net to make the score 6-0. The Wildcats finished that period with 29 shots on goal.

“We’ve been waiting for this day for four or five weeks now,” Turner said after the game. “It’s super exciting.”

Sophomore goaltender Ava Boutilier had a quiet game in net only having to make 14 saves, but she looked sharp when she needed to, coming up with a couple of big saves in the second period. On Monday she was named the Hockey East Defensive Player of the Week as she collected her second career shutout.

Head coach Hillary Witt was pleased with the effort and that many players found their way on the score sheet.

“I thought our seniors really lead the way, it was nice to see them have a lot of leadership. To have four seniors on the scoreboard is a good sign of leadership out there, so really proud of them but the whole team played well.”