UNH to ride momentum for homecoming 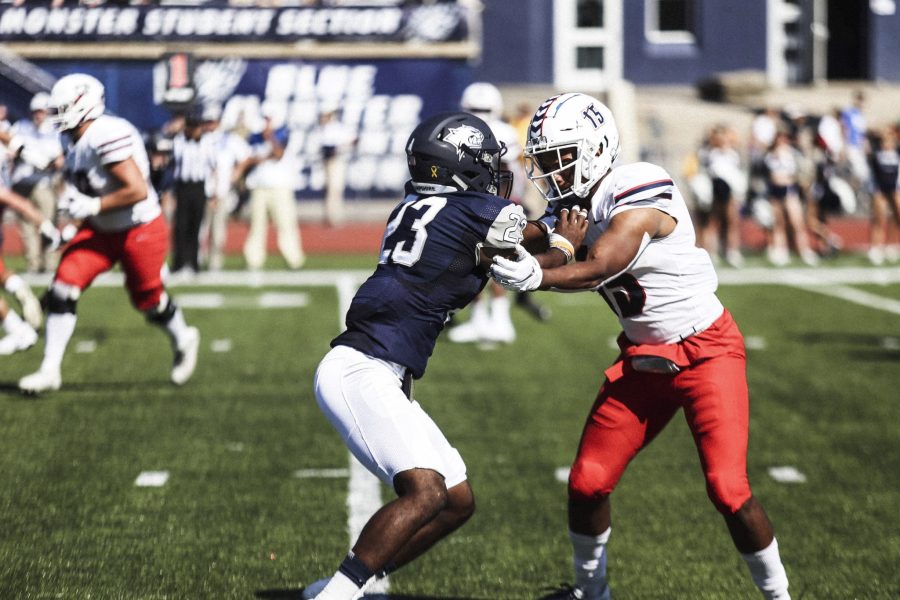 The UNH football (2-2) offense continued to make quick work in their second home game of the season, as they defeated Duquesne (2-2) 23-6.

A 23-yard catch by senior wide receiver Malik Love put UNH in position to strike first, and junior kicker Jason Hughes converted a 45-yard field goal less than four minutes into the game to give his team the lead. Love led the team in receiving on the day with 53 yards on four receptions.

On the ensuing Wildcat drive, first-year quarterback Max Brosmer marched the offense down the field to set up another field goal, but Hughes pushed a 33-yard attempt wide right to keep the score at 3-0.

Duquesne continued to be treated with a heavy dose of the UNH running game. Sophomore Carlos Washington Jr. and senior Evan Gray led the team deep into the opponent’s territory on their third drive. Redshirt-freshman Dylan Laube capped off the drive with a five-yard touchdown; giving UNH a 10-0 lead at the end of the first quarter. Washington and Laube finished the day with 68 and 27 rushing yards respectively.

Laube is a player that Coach Santos is very excited about in many different aspects. The running back has also been effective in the passing game, along with the return game as well.

“We’re really excited every time they kick to [Laube] and give him a chance to return.”

In New Hampshire’s final drive of the first half, Brosmer took the team to the Duquesne 22-yard line, teeing up a 39-yard field goal for Hughes. He converted and the Wildcats went into the locker room with a 13-point lead after two quarters.

The quarterback ended his day with 202 passing yards while completing 17 of 31 attempts. Duquesne head coach Jerry Schmitt even praised Brosmer after the game, saying that he handled himself well against their defense.

The UNH defense was relentless in the first half, only allowing Duquesne to convert one first down. The unit also only allowed 10 yards of offense to the Dukes in the first 30 minutes. Junior Brian Carter got to the quarterback twice, recording two sacks in the first half. Junior Evan Horn also added a sack to the defensive stat line.

After forcing a quick three-and-out, the UNH offense quickly got back onto the field and took the ball down to the Duquesne 22-yard line. Hughes continued to pad his stats with his third field goal of the afternoon coming from 38 yards – the most he’s kicked in a game in his career. UNH extended their lead to 16-points with just under 11 minutes remaining in the third quarter.

Duquesne began to make their way down the field on their following drive, but senior cornerback Prince Smith Jr. quickly put a stop to it with a 46-yard interception. The cornerback was helped by pressure from his defensive line, which had the quarterback running laps around the pocket all day.

Senior defensive back Isiah Perkins mentioned postgame how the secondary’s success doesn’t come without some help.

“We just had to trust that the blitz would get there, and the back half just had to lock down.”

After driving and milking 6:28 off the clock in the fourth quarter, UNH’s Hughes took the field for his fifth field goal attempt of the day. The junior’s kick was blocked with 8:32 to go.

With just 2:56 remaining, senior Pop Lacey ended Duquesne’s attempt to push the ball downfield with an interception which would help close out the game. Following the interception, Gray broke free for a 72-yard touchdown run to stretch the UNH lead to 23-points. This final rush from Gray would cap off a 99-yard day for the senior.

Duquesne finally got on the board with 58 seconds left in the game. Senior wideout Kareem Coles Jr. reeled in a 12-yard touchdown pass. The Dukes attempted a two-point conversion but failed to convert. The score of 23-6 would hold true as the final seconds ticked off the clock. UNH improves their record to 2-2 following their second straight home win.

Spirits are high around the UNH field house after the most recent win. Coach Ricky Santos made note of how this is a completely different team from the one that lost at Holy Cross. Although the offense stalled in the redzone on Saturday, Santos is still happy with the win.

“Any time you can get a win at this level it’s great,” said Santos. “The offense needs to be a little bit cleaner, but we established the run which we wanted to do…It’s always great to have these teachable moments in a win.”

The backfield tandem of Gray and Washington Jr. addressed the team’s issue of finishing in the redzone. Washington Jr. doesn’t view it as a problem, simply a matter of executing and being more disciplined. Gray praised Hughes while the team struggled to find the endzone but says the team “needs to start counting by sevens.”

With Homecoming weekend quickly approaching, the team is excited to get back into conference play against Elon at Wildcat Stadium. Santos and Washington both noted how the run game will be important heading into the 3:30 p.m. matchup. When asked about James Madison’s ability to run the ball against Elon last week, Washington couldn’t help but crack a smile. Specifically, he was asked if he was excited at the opportunity to run against the Elon defense and he responded with a grin and three simple words, “oh yeah, definitely.”