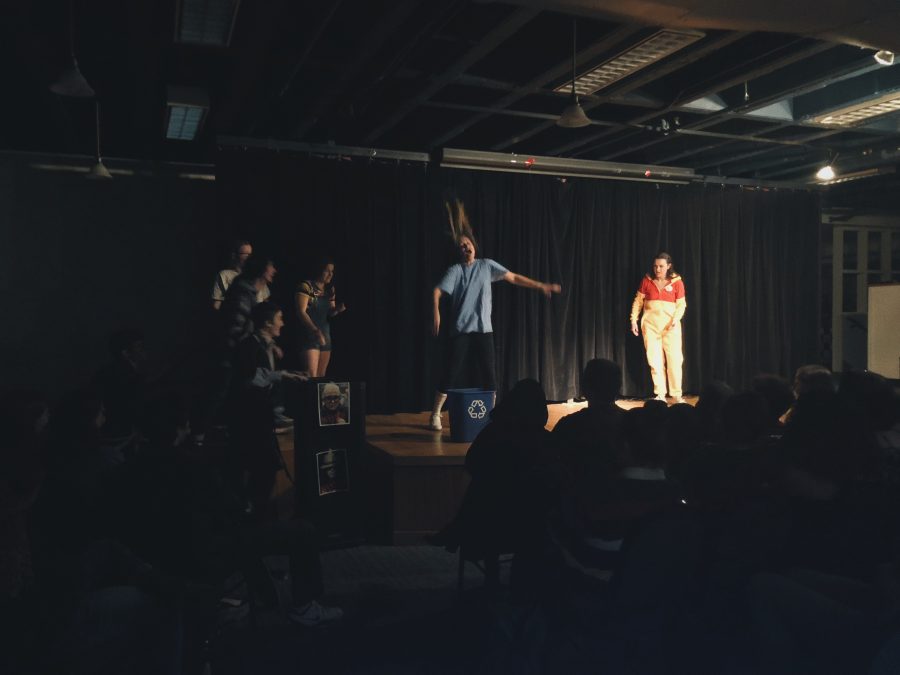 Ad-libbing took a turn for the spooky and the supernatural as comedy troupe Improv Anonymous hosted its annual Halloween “Fright Fest” in the Memorial Union Entertainment Center on Thursday, October 25 at 9 p.m.
The show featured many of the con- ventional trappings of Improv Anonymous performances, such as active audience participation through both scenario suggestions and their memorable game of “Freeze,” in which actors could pause the action to add themselves and switch up the scene. Unlike typical Improv Anonymous shows, however, the group’s Halloween edition hit the scene with several festive twists, including costumed cast members, a special one-time tagline response – “if you’re kooky, let’s get spooky” – and a surprising game called “Heads in a Bucket,” in which each onstage participant was required to hold their breath underwater in a bucket while a short scene played out on stage, after which the person would tap on the submerged actor/actress, who would quickly raise their head and soak audience members in the range of fire.
The night’s festivities, aside from the above amenities, also showcased a short film mockumentary, the Frankenstein’s monster of Improv member Brier Haigh, showcasing Improv Anonymous members as part of a special underground cult, led by Funky Chef of the Muppets, that, among other hobbies, engages in a collective exercise routine consisting of random dances, dragging one another on the ground while tied to chairs and other spastic movements that could only be described as the symptoms of mental unrest.
Other games featured Thursday night included – but were not limited to – a discussion panel about elections hosted by Phillip Seymour Whittemore, a game in which a scene was enacted and then repeated in shorter time increments (starting with one minutes, then halved to 30 seconds, and so on), and the halfway point game called “Grab Bag” where one actor pulled a random suggestion for a brief skit – such as the worst thing to say at the Count’s funeral – for anyone to run with, often times to shocked reactions from both the audience and the onstage actors.

The show’s final game – “Freeze” – gave both unknowns and veteran actors chances to embrace the stage and do what they will for a laugh or applause. Former Improv director and Class of 2018 graduate Freddie Pim was one of them.
“I’m just very grateful that I could come back on a Thursday night and see that my troop is growing, see that they’re doing great again,” Pim, who gradu- ated with communications and environmental sustainability and conservation degrees, said, “and it just makes me laugh and smile that I could see them again.” Pim added that the group’s embracing of younger members, as well as the dedication of older members, showcases a lot of positive “development” for the troupe.

“It felt like it was a blast,” current Improv Anonymous director Colin Dwyer, a senior economics major, told The New Hampshire; “not the biggest costumes or decorations that we’ve had in the past; but, you know, [we had] just the same turnout, a lot of great fans, [and] a lot of great audience members. It felt great to have a lot of the Improv gang with us; we didn’t have everybody, but we made do.”
Dwyer, who has served as director for the last two years, called being a part of Improv Anonymous – games, fans, friends and all – for the past four years the “best” part of his col- lege career, and hopes that the troupe will “keep the traditions up…and I think we will,” adding that he looks forward to “better things to come.”
Delete Image
Align Left
Align Center
Align Right
Align Left
Align Center
Delete Heading