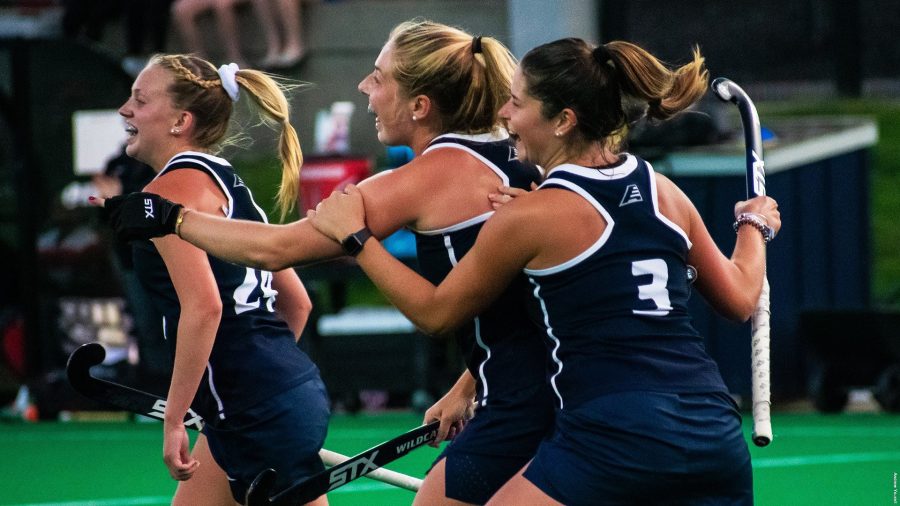 The UNH Field Hockey team (4-3) traveled to upstate New Hampshire this past Friday for an in-state game against Dartmouth (2-4) in Hanover, N.H.

UNH entered the match with a .500 record of 3-3 after winning their past three games. They looked to extend that streak against their rivals Friday.

UNH started the first quarter very slow and it hurt them early in the game as Dartmouth jumped out quickly to a 1-0 lead just one minute into the game. They were able to score again with one-minute remaining in the quarter, pushing their lead up to two goals.

Moving into the second quarter, Dartmouth clearly had momentum but UNH fought back quickly. Just a couple minutes into the second quarter, UNH was able to score as a shot from standout sophomore forward Finn Caron was knocked away only to be swept back in by first-year forward Emily Eckels. UNH closed the gap to 2-1 on Eckels’ first goal of her collegiate career. For the remainder of the quarter, UNH continued to ride the momentum as they held Dartmouth to zero shots and recorded seven shots of their own.

Several minutes after halftime, the ‘Cats were able to tie the game up at two apiece as Caron scored on a corner that turned into a scuffle in front of the net. The remainder of the quarter would be rather dull as both teams recorded only a couple of shots on net, with some great defensive plays from both teams.

Midway through the fourth quarter, Dartmouth would grind out a goal, leaving UNH trailing 3-2 once again. From then on it was all UNH. The ‘Cats proceeded to score and tie it up 3-3 five minutes later. UNH was all over the field the rest of the quarter as they recorder five shots to Dartmouth’s zero. With under a minute left to play the ‘Cats set up a promising attack, the ball ended up rolling and striking to far left post. The game would move into overtime.

In the second overtime the ‘Cats continued to dominate. Closing the game out swiftly, senior midfielder Kayla Sliz pumped a rocket of a shot past the goalie to end the game and give the Wildcats the overtime win.

Field Hockey has now won four games in a row after starting with three losses to move above .500 on the year.

They will endure a huge test this upcoming weekend as they take on Bryant (0-8) in Providence, R.I. on Friday and #14 ranked Harvard (3-2) on Sunday on Cambridge, Mass. They look to continue their winning streak and potentially move into the top ranked teams in the country with a pair of wins this weekend.