Students encouraged to “eat the invasives” 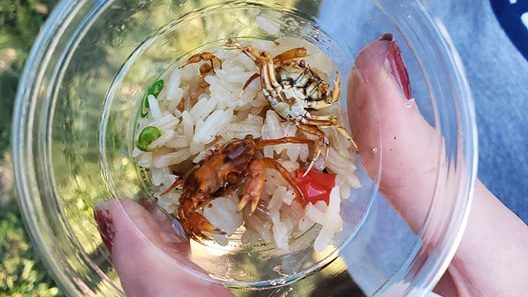 The University of New Hampshire (UNH) Department of Agriculture, Nutrition, and Food Systems, as well as the UNH brewing minor program, hosted “Eat the Invasives” on Wednesday, where students, faculty and community members could try green crab stir fry and the two new beers from the brewing program.

The 4 p.m. event was run by Professors Gabriela Bradt of the Department of Natural Resources and the Environment and a fisheries extension specialist, and Cheryl Parker of the Department of Agriculture, Nutrition, and Food Systems, who fried the crabs and made the stir fry.

The green crab found in the stir fry is an invasive species that has wreaked ecological and economic havoc along the New England coast. Bradt and Parker deep-fried the crabs to give them a popcorn-like texture. Even though the crabs were fried shell and all, the entire animal was edible.

“It was salty, it tasted like a saltine cracker,” senior mathematics major Francesca Ritter said. “It looked spooky. I’ve never eaten a crab with the shell on it.”

Although the smaller crabs, which were about the size of a nickel or dime, were easily edible, the bigger crabs don’t have much meat on them so they are better utilized for broth and soups. The bigger crabs that were caught were used to make stock, which was then used in the fried rice.

To go along with the theme of “eating invasives,” the brewing classes came up with a beer that utilized the invasive species of seaweed – gracilaria, which is found along the coast, and at Adam’s Point. The beer was aptly called “the sea-cret ingredient.” Along with seaweed, there is lemongrass from the UNH high tunnels and blueberries infused in the drink. While on a tour of the small brewing laboratory, guests over the age of 21 could take a sip of the “Sea-cret Ingredient,” granted they had an ID with them.

“It was smooth, reminiscent of the ocean,” junior neuroscience and behavior major Dillon Mulhern said about the “Sea-cret Ingredient,” “It was slightly sour, as with most stouts, just a really put together final product.”

While the “Eat the Invasives” event mostly centered around raising awareness of the green crab and gracilaria seaweed and how they can be utilized, the event also wanted to raise awareness of the agriculture and sustainability majors and brewing minors. On top of the brewing and green crabs, guests could take a shuttle over to the high tunnels and see how fruits and vegetables are grown at UNH or people could put on blue plastic booties and play with baby chicks from the PEEP Program.

“Our purpose here is to educate people about the invasive species,” Parker said. “But we are also trying to get people to know about everything [the Department of Sustainable Agriculture does.]” Parker wanted students to be able to see the high tunnels and PEEP programs because students have often told her that they “don’t even know where or what that is.”

“[Eat the Invasives] is mostly for exposure of the program because what we do is really, really cool and there’s not a crazy amount of promotion,” senior sustainable agriculture and food systems major Matthew Doherty said. “It’s very UNH. It deserves praise and recognition, and eating invasives is so badass.”

Doherty went on to say that even though he is a vegetarian, he would happily eat green crabs if it was benefiting the environment, and was excited at the prospect of catching his own.

All the compost from the event will be going back to the high tunnels, including crab carcasses and bits from the brewery, giving “Eat the Invasives” “go full circle,” Parker said, which is an idea that she wants to apply for other beers and projects within the brewing program.