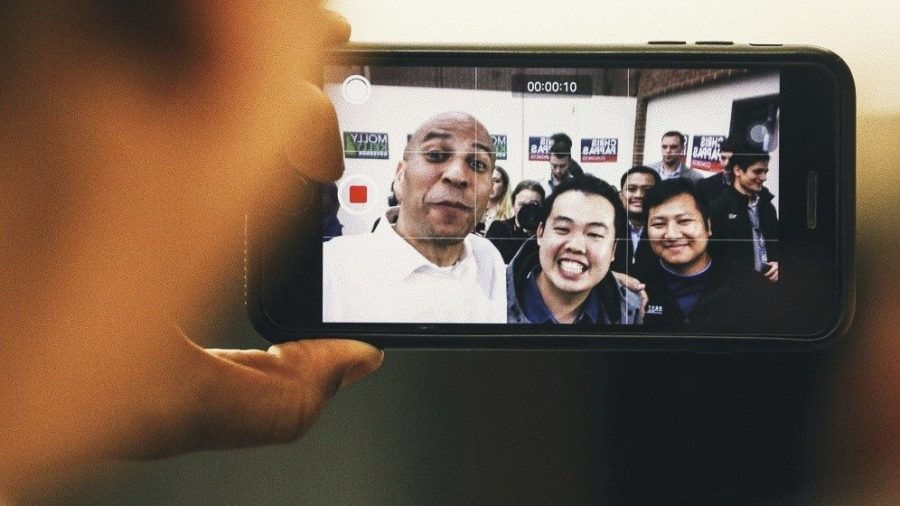 As part of recent efforts to revitalize his presidential campaign and invite younger voices from across the country in one fell swoop, U.S. Senator Cory Booker (D-NJ) led a national student press call last Thursday, where he invited many student news outlets, including The New Hampshire, to discuss his overall platform and his takes on some of the biggest conversation-starters of the 2020 election thus far.

The 9:15 p.m. press call saw Booker, per a Facebook message from campaign press secretary Alex De Luca, strive to “highlight his record of bringing people together” and his “vision of healing our country after years of division under Donald Trump.” Along the way, the candidate responded to inquiries into his stances on issues like student debt, the impact of inclusivity and diversity on journalism, racism, U.S. relations with Israel, and climate change, among other topics.

“…I’ve been making the theme of my campaign from the very beginning [about] the urgency of a nation, for us to come together, to heal, to recognize that we share so many common challenges, so much common pain; and we’ve got to turn that into a sense of common purpose,” Booker said in his introductory remarks. “We’ve got to have a leader that no longer divides us against each other, demeans and degrades fellow Americans but someone who is standing up every day and uniting this country, reminding us of our common bonds, and making sure that we’re elevating and lifting each other up.”

When asked by The New Hampshire about his plan to combat student debt and how his plan compares to his rivals, Booker said he bases his plan for debt-free college on legislation he has cosponsored. A notable example is the “Debt-Free College Act,” which was introduced to the Senate this past March and aimed to “establish State-Federal partnerships” and give eligible students “the opportunity to attain higher education at in-State public institutions of higher education without debt…”

The bill, if passed, would also provide “Federal Pell Grant eligibility to DREAMer students” and “repeal suspension of eligibility under the Higher Education Act of 1965 for drug-related offenses,” per Congress.gov.

The senator added that his plan also requires increased action from both the federal and state governments to “relieve” students of not just tuition but “all-in costs” as well.

“And it’s more than that,” he said. “We believe in forgiving debts of people that are going into public interest careers like teaching or public defenders. We believe in forgiving the debt of low-income Americans who are struggling to make it or people who have been built by education schemes and loan schemes, people who are struggling right now.”

Booker added that his plan also takes inspiration from another bill of his which promises every child born in America $1,000 in an “interest-bearing account” that would be shared by all members of the family and increase over time and be added to up to $2,000 for “every child based upon their family’s income,” meaning that lower-income children would theoretically possess up to $50,000 in that account by the time they are of college-age.

Booker said the account could be used to help pay for college and for other long-term ventures like buying a house.

One of Booker’s first questions came from Spelman College in Atlanta, Georgia, where a student named Lauren sought advice on how current and future journalists could do more to “include the stories of others” and welcome “narratives of all peoples” while retaining their accuracy. The senator replied that data and statistics alone are secondary compared to a journalist’s ability to express “courageous empathy” for other peoples and their experiences, which he said is a major catalyst for enacting change and inclusivity.

“And we know this through visuals that we’ve seen…I remember my parents’ generation; the death of four girls in a bombing in Birmingham took segregation that many African Americans were experiencing and the harshness of Jim Crow from something that might have been intellectual to forcing people to see the suffering, see the challenges, see the extreme brutality,” Booker said. “So, when journalists are able to capture real-life stories, not just quoting statistics or giving dry data and information, I think that that [is] ultimately what moves peoples’ hearts and motivates people to take action and to change.”

Another inquiry came from student Jake Webster – a reporter for the Iowa State Daily, Iowa State University’s student newspaper – who asked the candidate about his chances in the nation’s first Democratic caucus vote, set for Feb. 3 of next year. Booker told Webster that his campaign is “one of the best-positioned” to win the Hawkeye State, stressing that “there has never been a time in the last 50 years-plus where somebody from the Democratic party…polling ahead this far out ever went on to be President of the United States” citing Jimmy Carter, Bill Clinton and Barack Obama as examples.

Booker’s optimistic response comes as his campaign suffers from an apparent lack of recent donations from supporters and third-parties. He announced on Sept. 21 that his campaign must raise $1.7 million by Sept. 30 – a half-month shy of next month’s Democratic debate in Ohio – or he would be unable to continue his run for president, according to reports from Business Insider, CBS 2 New York and other outlets.

Visitors to his campaign site are currently redirected to a stark donation page seeking contributions of $3, $50, or $20.20; as of this writing, his campaign has raised nearly $1.07 million of that goal.

The senator also received a question from a student at the University of Oklahoma, who asked him about his ability to “lessen racist attitudes” sparked from events like Charlottesville and others. He argued, in a redux of his opening remarks, that changing times necessitate a leader “that is not going to demean, degrade or divide Americans like this one [Donald Trump] is…on a regular basis,” does not draw inspiration from “right-wing supremacist terrorists,” reduce racial bias from procedures like policing, encourage safer and more inclusive educational environments and reverse recent initiatives such as the ban on transgender people from entering the military, among other policies.

“There’s so much we can do practically through action, through the actions of a president, to deal with this,” Booker said while stressing a universal “moral obligation” toward ending discrimination against minorities. “You know, Martin Luther King [Jr.] said so eloquently that you can’t legislate someone to love me, but you can stop them from lynching me; that you can’t legislate to change a man’s heart, but you can legislate to restrain the heartless.”

Anton Shenk, a reporter for the Tufts Daily, pushed Booker for his stance on U.S.-Israel relations, basing his question on a bill Booker cosponsored in March of 2017 called the “Israel Anti-Boycott Act” which primarily aimed, had it passed, to grant the federal government more power in prohibiting boycotts against U.S. allies like Israel “fostered by international governmental organizations against Israel.” The bill would have amended the Export Administration Act of 1979.

Booker, who has visited the West Bank in the past, responded with a commitment to a two-state solution between Israel and Palestine and improving the quality of life in the area such as addressing human rights violations, granting more humanitarian aid to both states and pushing for greater access to cleaner water, among other convalescences.

Other questions included another inquiry on his efforts toward greater national inclusivity from Managing Editor Lacey Latch of the DePaulia, the student news outlet of DePaul University in Chicago; and a question concerning Booker’s stance on the Green New Deal – which he helped introduce this past February – and climate change from Ad Manager Victoria Howard of My TJ Now from Winthrop University in Rock Hill, South Carolina.

In a Sept. 24 email to The New Hampshire, Julie McClain Downey, the Director of State Communications for the Cory 2020 campaign, said that the press call was the first of its kind for Booker and represented an effort to “connect with student journalists–who are often leaders on their campuses–and allow them the opportunity to ask Cory their questions directly.”

“The Senator believes in the importance of media outlets on campuses, and the campaign sees it as a way to communicate more clearly and intentionally to young voters,” she added.

Downey called the student response to the call “enthusiastic” and expressed hope that Booker’s campaign will do more like Thursday’s in the future.