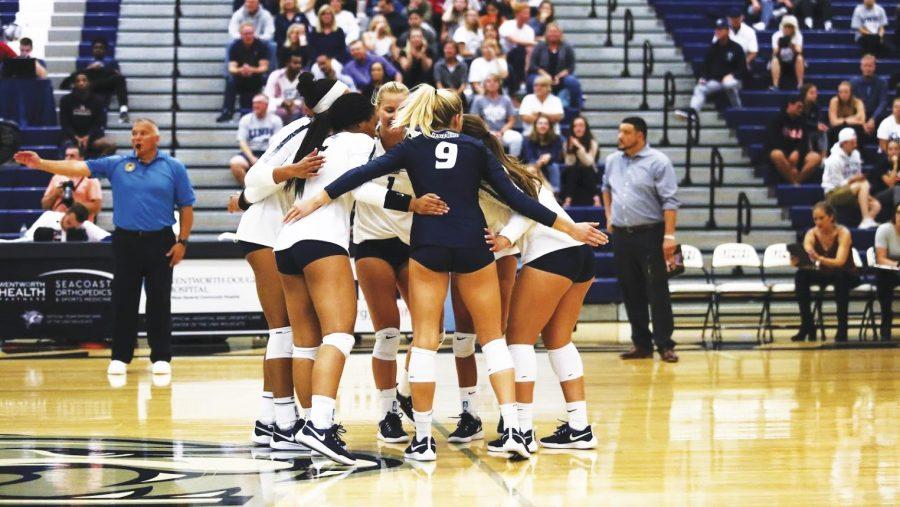 The UNH volleyball team (8-3) traveled to Hamilton, N.Y. to participate in the Ellis Rowland Memorial Tournament this past weekend where they fell to Rutgers (6-3) and defeated both Colgate (6-3) and Quinnipiac (4-5).

UNH’s opening game against Rutgers, which is located in New Brunswick, N.J., posed a familiar foe for ‘Cats head coach Chris Feliciano, who used to coach for Rider University in Lawrenceville, N.J.

With Rutgers being a member of the Big 10 conference, Feliciano was aware that his team would have to be in top form to compete with the Scarlet Knights.

Rutgers proceeded to defeat UNH 3-0, dominating all three sets including a 25-9 win in the first set to open the match. Over the course of three sets, Rutgers had 42 kills to UNH’s 15. Senior right-side hitter Hannah Petke led UNH with five kills, four blocks and seven points.

Feliciano acknowledge the level of competition his team was facing. “Anytime you play a Big 10 team you have to be on top of your game, and unfortunately we weren’t.”

This was the first blowout loss of the season for UNH.

Despite the rough start to the tournament, UNH bounced back with a 3-1 win over Colgate on Saturday at 12:30 p.m.

After losing the third set 25-18, UNH closed out the match with a 25-16 victory. Feliciano was happy with his team’s ability to remain strong in long matches. “The team is really showing high levels of grittiness as we come together.”

Momentum continued for the Wildcats as they beat Quinnipiac 3-1 Saturday at 3 p.m.

Macaulay’s success on the court was recognized this week, as she won America East co-Rookie of the Week along with Hartford’s first year outside hitter Maddie Lindsay.

UNH continues play on Sept. 21 and 22 as they head to Towson, Maryland for the Tiger Invitational. They will face Loyola University Maryland (6-5), New Jersey Institute of Technology (1-11) and Towson University (7-2) over the course of the weekend.