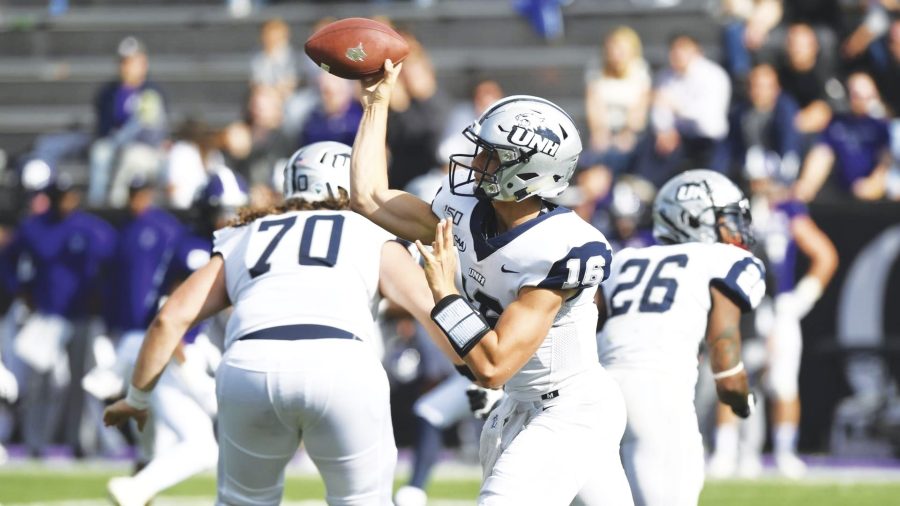 The Wildcats lost 17-30 at Florida International University in first-year quarterback Max Brosmer’s first collegiate start. Brosmer tossed for 224 yards, two touchdowns, and an interception on the rainy Florida night, but a fourth quarter offensive stall kept UNH out of the win column before heading back to the Northeast.

The two teams traded blows in the first quarter, which was started by a successful field goal by junior kicker Jason Hughes, to put UNH ahead 3-0 early. After FIU answered with a touchdown run, the Wildcats regained the lead when sophomore wideout Brian Espanet caught the first of Brosmer’s two touchdowns. Redshirt first-year running back Dylan Laube caught Brosmer’s second touchdown early in the second half. The teammates connected on an 86-yard pass and run to give UNH the lead in the third quarter. Along with Espanet and Laube, senior receiver Malik Love was also effective and added 52 yards on six catches.

While UNH had nearly 100 more passing yards than FIU, the Panthers had more than double the number of rushing yards UNH registered. Pacing the day for the Wildcats was senior Evan Gray, as he had 71 yards on just 5 carries, averaging 14.2 yards per attempt. Sophomore running back Carlos Washington and Laube also contributed, running for 40 and 36 yards respectively.

An errant punt in the fourth quarter would be the nail in the coffin for UNH. After FIU returned the kick for a touchdown to extend their lead to 10 points, UNH couldn’t find a groove on offense to mount a comeback before time expired.

Letting the first two games of the season get away from themselves in the fourth quarter isn’t something that the Wildcats want to have be a trend. Santos made it a point to mention how finishing out games has to be a point of emphasis for his team moving forward.

“Being on the road is tough, but there’s no excuses, we just didn’t get it done in the first two (games),” said Coach Santos. “There’s no consolation prize, either you win, or you lose. There were some silver linings in our mental toughness, our fortitude, and how we overcame a lot of things. If we continue to build on that going forward, I think that those are things that are going to pay dividends and turn into some wins.”

UNH will welcome the University of Rhode Island into Wildcat Stadium for their home opener on Saturday, September 21. This game could be a potential launching pad for the UNH offense. URI sits with a similar 0-2 record, but has managed to give up at least 41 points in each of their first two games. If there is ever a time for Ricky Santos’ offense to work out the kinks, it’s this Saturday.

“We want to be the ones to set the tone this week. We want Rhode Island to react to us, and not the other way around like it was last year,” noted Santos.

Santos has named Brosmer the starting quarterback for the second straight week, noting that the first-year player has done a good job protecting the football and getting through his progressions. Santos isn’t closing the door on redshirt first-year quarterback Bret Edwards playing this week as well, however. Santos says they still are confident in Edwards and he has the potential to see some action on Saturday.