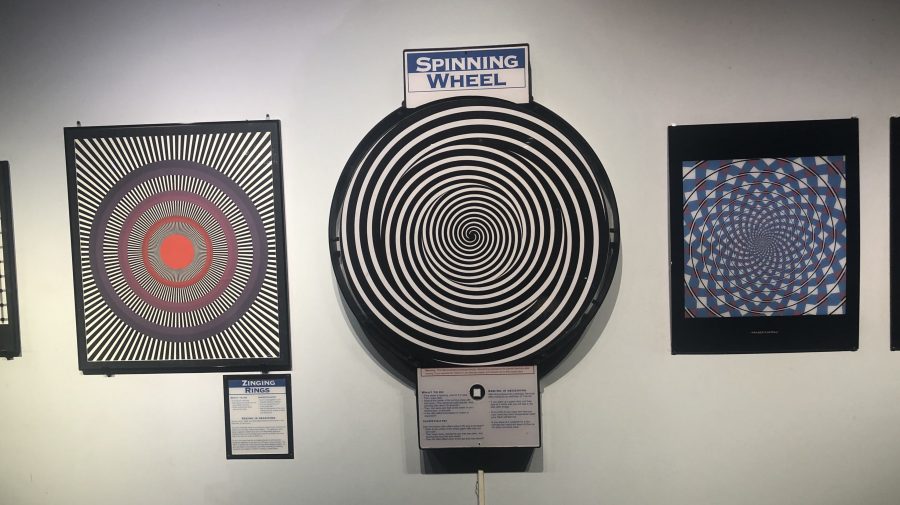 Young adults flocked from schools across the region to enjoy the second week of the Museum of Science’s College Nights Series, taking place each Friday in September from 5 p.m. to 9 p.m.; with a valid student I.D., all students are welcome to visit the exhibit halls for free.

Last Friday, couples giggled over the Spinning Wheel that created a mind-boggling optical illusion. Friends argued over the “Forces at Play” on the seesaw in the Science in the Park exhibit as they tried to balance. A student studying civil engineering showed his friends what he does in the classroom at the Yawkey Gallery on the Charles River.

And Chris McDonnell, a Boston native and senior at Wentworth Institute of Technology, has “come to the Museum of Science a ton of times.”

“But you know, being an engineer, this is like, engineering a bridge support, this is literally exactly what I do,” he said as he demonstrated how to construct a small model bridge over noisy flowing water.

Accompanying McDonnell were fellow Boston native James Stinson-Cerra, a Wentworth senior, and James Macolini of Kennebunk, ME, a senior at Emerson College. Stinson-Cerra said, “I really liked the electricity theater. I remember seeing it when I was really little so it was kind of cool to come back and see it again.”

Macolini also enjoyed the theater. The coolest fact that he learned was that the frame of the car is what protects one from getting struck by lightning, not the tires.

Like Macolini, Emily Malsch was also struck by the fact that “Lightning can go through rubber…I did not know that.” Malsch, a senior at Bentley University, was planning on visiting the museum before she realized that admission was free due to the series of College Nights.

The Theater of Electricity was packed for its 7 p.m. showing. People lined up the stairs and crowded on both balcony levels as the instructor demonstrated with the world’s largest air-insulated Van de Graff generator. The generator is used to educate the public about electricity and lightening safety.

Ryan Thomas, the Museum of Science’s marketing coordinator since March 2017, considers the theater to be “very unique to us and it’s one of the iconic things of our museum.” It’s his favorite permanent exhibit, but currently, he enjoys Gunther von Hagens’ Body Worlds & The Cycle of Life, an exhibit only in the museum until Jan. 5, 2020. The exhibit consists of over 100 preserved human bodies at all stages of life with the intent of promoting good health.

The Museum of Science’s press release for the series of events, released on Aug. 28, says that Body Worlds is “the world’s most visited exhibit and a unique opportunity to look within yourself.” Students can see the exhibit for $8, a discounted price from $32 (not including exhibit halls admission). Thomas thinks the exhibit is, “really cool and it’s just kind of freaky in a way.”

Thomas has been responsible for planning College Nights for the third years now. For more than 20 years, the event has been scheduled for a single date at the end of September, but Thomas and the museum felt that a series of events was beneficial. “This year, given that Body Worlds is a unique exhibit that has capacity constraints and given that College Nights events have been a little chaotic…we wanted to create a better experience for students,” Thomas said.

In an email, Museum of Science Publicist Amanda Brown reported to have “welcomed thousands of students during College Night” in previous years before the event was extended into a series in 2019.

Thomas’ goal is to provide college students with more, and cheaper, access to the museum. An Emmanuel College alum, Thomas did not know of the Museum of Science during his undergraduate years, which he thinks is, “unfortunate,” adding that “all college students should be able to come here and experience it and hopefully have a relationship with us at some point.” Thomas hopes that admission for students can eventually be free all of the time.

In addition to experiencing the museum as a spectator, Thomas also encourages students to pursue internships through the museum, offered in “a vast variety of fields.” Although the museum does promote STEM as “part of [its] mission,” there are internships in marketing, public relations, human resources, and always volunteer opportunities. Every internship is paid and includes free admission to all museums in Boston, according to Thomas.

Also in the August press release, Senior Vice President of Marketing Strategy & Communications Todd Sperry said he was “thrilled to welcome new and returning colleges students back to town!”

Aside from a vast array of exhibits, students attending any of the College Nights are also welcome to see shows in the Charles Hayden Planetarium, Mugar Omni Theater, and 4-D Theater for $6. Shows include “David Bowie”, “Coldplay” and Pink Floyd’s “The Wall.”