Mad about books: ‘Which Brings me to You’ by Steve Almond and Julianna Baggott 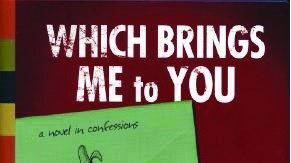 “Which Brings Me to You” by Steve Almond and Julianna Baggott shows how two people can connect in very strange ways and how sometimes we feel more comfortable with a stranger than we do with ourselves.

The book follows John and Jane, two people who meet at a boring wedding and end up sleeping together in the coat closet. After the wedding, they find that they might have some chemistry and decide to write to each other to get to know each other. These letters aim for “honesty over seduction,” meaning that they each want to know the nitty-gritty of each other’s lives, no matter how ugly it may have been. This gave the narrative an almost timeless feeling to it because there was little to no talk of technology throughout, so the reader cannot place them in a particular time period; thus, the relationships that they go through are more universal. Even the way they talk and write could be anywhere from the 1950s to today.

The first chapter is written in John’s point of view, mostly about how terrible the wedding was, while the last chapter portrays Jane’s point of view, revealing what it is like to be together again in the flesh. The chapters in between are written as letters, and each character has a very distinct voice. I thought this book was so funny and the way John and Jane look back on their lives while opening up was always entertaining and parts of their history could easily resonate with any reader. They talk of family, friends, experiences and most importantly, their past relationships, whether they were romantic or sexual, or if they ended happily or tragically. Jane and John hold nothing back with each other and, by extension, from the reader.

The writers also display an impressive ability to quickly change gears from funny to sad to angry without the reader realizing it right away. So much of the book is about reflection and how much we share with other people. It would go from, “His d***, for example, was just that. It wasn’t odd or typical. It just was, by god. And isn’t that nice?” to lines like, “Time is a track that loops back on itself, where memories rattle like tin trains. How had I been spending my days, but in the whirl of memories?”

I think the reader ends up with a love/hate relationship with both of the characters because they both try to improve but write about the terrible people they were in their younger years, and there’s the question of “does your past define you” that flows throughout.

The biggest issue with this novel is simply that strangers hardly ever open up to each other so honestly. These are secrets and confessions that you would maybe tell a best friend or a longtime partner, so the openness, while refreshing, funny, exciting and heartbreaking, is not always realistic.

The ending could be seen as “we should never let anyone know everything about ourselves” or “the only way to connect is to open up.” I believe that the decision rests on the reader’s mindset. I would highly recommend this book to anyone who likes romance but is tired of its cookie-cutter format, needs a laugh or to anyone who just likes drama.