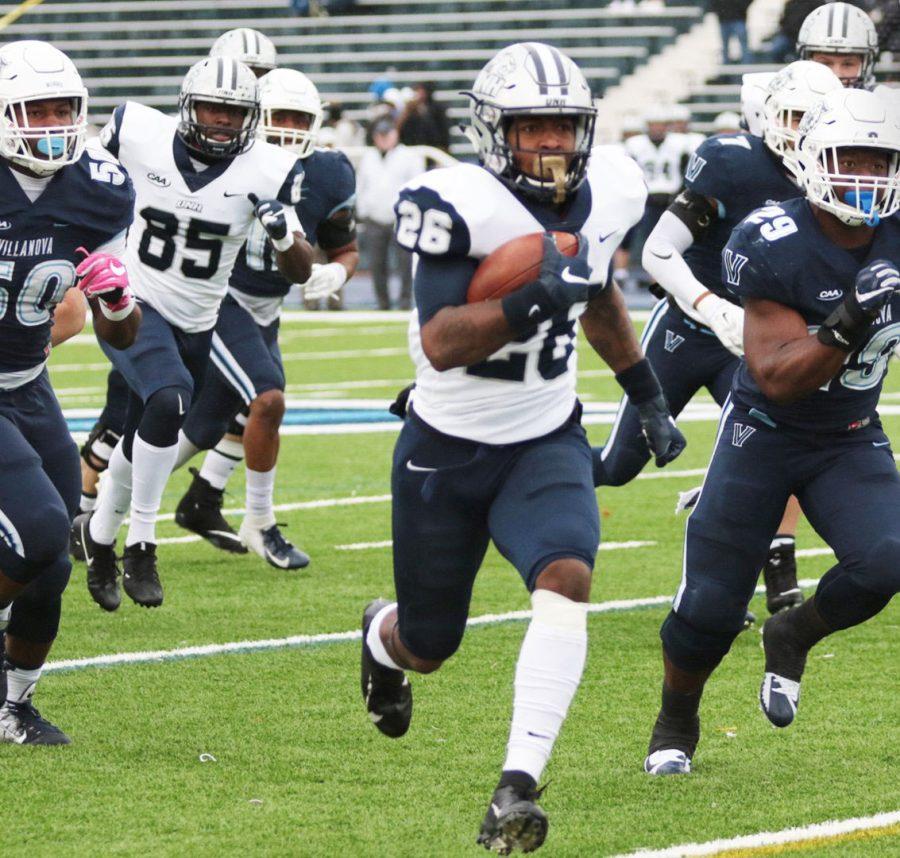 The UNH football team got their second victory of the season, a 34-0 blowout win over Villanova (3-5, 0-5 in conference play) on Saturday.
This matchup pitted two nationally ranked teams in the FCS who have not lived up to the preseason hype against one another.
The ‘Cats wasted no time getting on the board. On the first play from scrimmage, redshirt first-year running back Carlos Washington Jr. took a handoff from senior quarterback Trevor Knight and ran it 75 yards to the house to put UNH up 7-0 before fans could get to their seats.
Washington was setting a tone early for the Wildcats and for him personally. The running back had a career day, rushing 17 times for 179 yards and two touchdowns. Washington was named the CAA Football Rookie of the Week for his performance in the win.
It was the polar opposite performance for UNH compared to last week’s game versus Delaware.  Last week, all three facets of the game struggled in a blowout loss. On Saturday, however, all three played very well.
Sophomore kicker Jason Hughes converted his 37-yard field goal attempt late in the first quarter to extend the Wildcats lead to 10-0. Hughes bounced back from a missed field goal attempt in last week’s game.
The defense had their best game of the season, holding ‘Nova’s offense to 164 total yards, a season best. The run defense set the tone. ‘Nova ran for only 13 yards on 21 attempts as a team (.6 yards per carry). The ability to make the opposing Wildcats one-dimensional allowed UNH to shift their attention to their pass defense. ‘Nova senior starting quarterback Zack Bednarczyk was held to 103 passing yards on 21 attempts (4.9 yards per attempt). Villanova turned to backup first-year quarterback Qadir Ismail late in the second half with the game out of hand. Ismail totaled 48 passing yards on 12 attempts (4 yards per attempt).
UNH dominated the ground game from start to finish in this impressive win. The team rushed for 246 total yards on 43 attempts (5.7 yards per rush).
Washington put the Wildcats ahead comfortably with four minutes left before halftime when he found the end zone for the second time in the afternoon on a 16-yard run. The touchdown made it 24-0.
Trevor Knight was able to control the ball in this one. He did not throw an interception and went 13-23 for 158 yards though the air. He also added 27 yards on the ground on eight rushing attempts.
The win marked UNH’S first in the CAA this season.
Next up for the Wildcats is #3 James Madison in Durham on Saturday at 1 p.m.
James Madison leads the CAA with a 4-1 record in conference play, as well as an overall record of 6-2.
The Wildcats will look to get their first upset win of the season and start their first winning streak of the year.