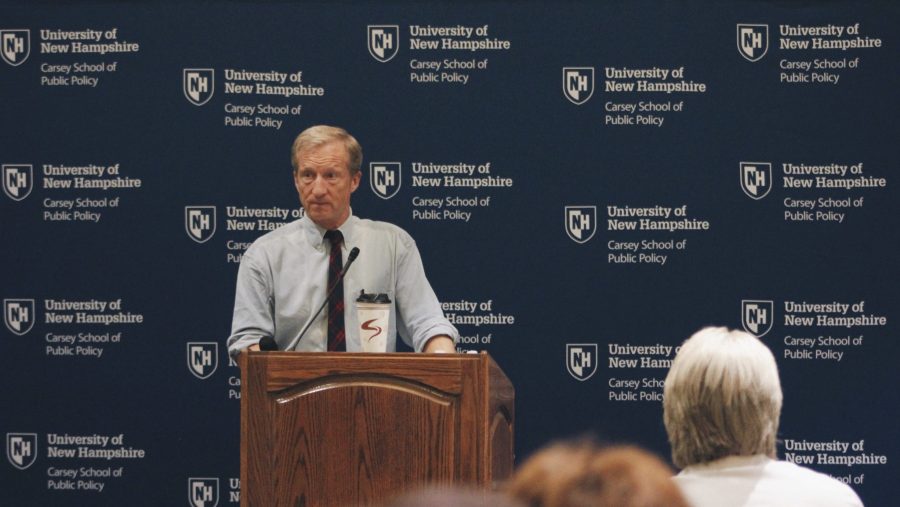 For presidential candidate and billionaire Tom Steyer, one of the newest entries in the already crowded Democratic race for the White House, playing double-duty was the name of the game as he led both a talk on public policy and a mini-rally to promote his national platform at Huddleston Hall on Friday, Sept. 6.

The 7 p.m. event, hosted and sponsored by the University of New Hampshire (UNH) Carsey School of Public Policy, welcomed the New York native to the Durham campus to speak on the subject of “structural reform of government,” according to a UNH Today preview of the event on Sept. 4. Carsey School Director Michael Ettlinger opened the talk with a warm welcome to the small group of attendees and a disclaimer that the Carsey School, despite welcoming the candidates and allowing them to speak about their platforms, does not endorse any political office-seeker or party.

Steyer’s talk consisted of both his perspective on key issues such as climate change, gun control and Medicare, and his suggestions for improving aspects of American democracy, with the bulk of the time dedicated to answering visitors’ questions about his stances.

“I’m running because I think we have a broken government,” he said in his opening remarks. “I think that the corporations have bought the government, and until we break their stranglehold, we’re not going to get any of the things we want…and I believe that in order to do it, we’re going to have to…retake the democracy and get back government of, by and for the people. And for the last 10 years, that’s what I’ve been doing.”

Prior to the Q&A, Steyer also told his backstory, claiming that he is a “normal guy” while joking that the media believes his first name is “Billionaire.” He explained that is mother originated from Minnesota and taught in New York public schools and the Brooklyn House of Detention, while his father, brother and his father’s sister were the first generation in their family to go to college, where his father became a lawyer before enlisting in the Navy during World War II following the Pearl Harbor attacks and ultimately prosecuting Nazis in Nuremberg.

“My parents had a very, very straightforward attitude about what people are supposed to do as Americans and as people on the Earth, which is to do the right thing and make certain you give back more than you get,” Steyer said.

From there, Steyer, who studied at both Yale and Stanford University, recalled building his first business from scratch without any financial assistance from his parents or employees into an international business. He also remembered obtaining the ability to dive deep into what makes companies, as well as entire nations, successful.

Steyer took time to critique President Donald Trump’s handling of the economy as well, calling his economic strategies “deeply shallow” and “fake” while calling the president himself an “incompetent” and “failed businessman.”

“And I believe that one of the things I can do is take on Mr. Trump on the economy,” he said as he reflected on how his experiences over the last 30 years prepared him for his present ventures. “You know, I think that every Democrat wants to know who can beat Trump and do it in a responsible way so that we don’t mess everything up.”

Amongst inquiries into details about Steyer’s platform, one attendee asked him about his often-advertised “national referendum,” his take on a so-called veto referendum, a “citizen-initiated” ballot measure, per Ballotpedia, asking voters “whether to uphold or repeal a law passed by the state legislature, a city council, a county board of supervisors, or some other legislative body.”

“A referendum would be for something like mandatory background checks on every gun purchase,” the candidate replied. “More than 90 percent of Americans – Republicans and Democrats – want mandatory background checks on every gun purchase! But we can’t get them because gun manufacturers funnel anything through the NRA [National Rifle Association]…if we had a national referendum…you could get people to say, ‘do you want this,’ and it wouldn’t be a poll; it would be a vote.”

When asked about ongoing concerns over growing student loan debt, Steyer said that the country must first break its corporate “stranglehold” before it could pursue policies that reduce the cost of college or make colleges tuition-free under his leadership. He added that “several steps” would have to be taken before he would clear all student debt.

Meanwhile, another attendee questioned Steyer on his stance toward the Republican party, with Steyer relying that he makes a clear distinction between Republican voters and elected Republican leaders currently in Washington.

Steyer cited a recent trip to the U.S.-Mexican border and an immigrant shelter in the town of Callan, TX – where he called the border patrol’s practice of separating immigrant children from their families “a crime against humanity” – as an example of seeing both sides of the political spectrum and across the country equally displaying dismay at the situation.

“The nun who was running the shelter specifically told us that the Republican electives in her town were working really hard for the kids,” the candidate recalled as he attempted to make a distinction between national party leaders and local party officials. “So, when I think about Republicans as people, I never look down on them…you can disagree with me all day; it’s fine with me, it’s a democracy…if you don’t tell the truth or you put yourself and your career ahead of the good of the American people, I really don’t care what party you’re in: I am very angry.”

Ettlinger told The New Hampshire after the talk that having presidential candidates in New Hampshire presents a “huge opportunity” for the UNH and Durham communities to learn more about the contenders directly from them and confirm the significance of their role as a noteworthy swing state in the general election.

“It brings, you know, potentially, the future president of the United States to campus, that’s an amazing opportunity,” he said. “…all of us are going to be interested in seeing the candidates that we think have the best chance or that we personally might be most likely to support, but I would really encourage people to come and hear the full range of candidates because all of them have interesting perspectives and interesting things to say about the future of this country…”

Sophomore mathematics major Jacob Zercher, one of the few UNH students present at the event, expressed similar gratitude at having the chance to hear out Steyer, who he called “genuine.”

“I think it’s really important just to let candidates know what we think and, you know, to hear from them personally,” he said. “…seeing someone in person is very different than…reading their tweets and seeing their ads on YouTube.”

Zercher, despite praising the event for allowing him to see the candidate in person, wished more of his peers had attended, saying that he was “disheartened” by the absence of “student presence.”