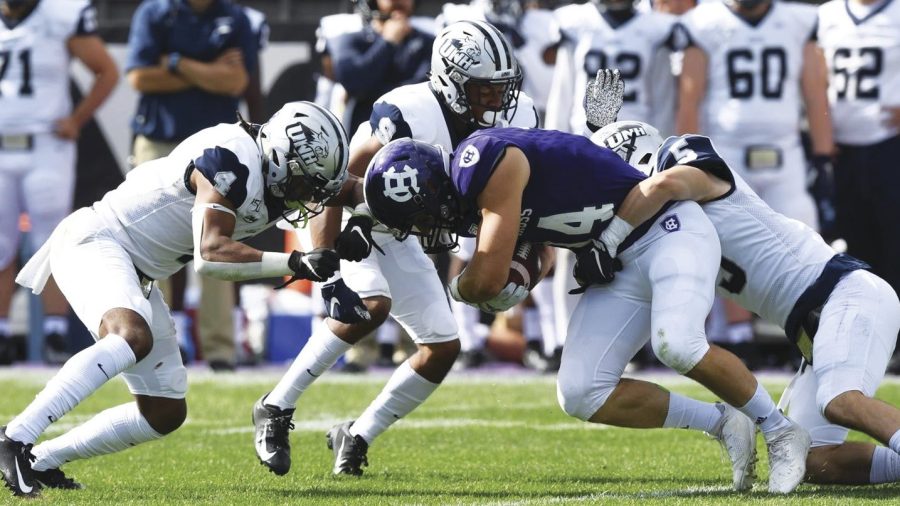 The UNH football team nearly escaped Worcester with a win over Holy Cross to kick off the 2019 season. A fourth quarter fumble would prove to be fatal for the young Wildcat offense as they lost 10-13 in their season opener.

“Obviously it’s a tough loss, there’s a ton of positives that we can take from that, but we have to give credit to that team (Holy Cross). They played extremely hard,” said Interim Head Coach Ricky Santos.

Both sides had a tough time generating any sort of offense on Saturday. Just as Coach Santos alluded to at last week’s press conference, both of his quarterbacks saw the field this week. Redshirt freshman Bret Edwards started the game and played the entirety of the first half. Edwards completed just seven of 18 throws, tallying 97 yards and an interception. First year quarterback Max Brosmer got the nod in the second half. Brosmer threw 50 percent, connecting for 106 yards and threw an interception. Santos still believes that both quarterbacks will be given chances early in the season before they settle on one.

“At some point someone is going to take the reins and be the guy, until we figure that out, we’re going to get both of these guys some reps.”

Brosmer admitted that nerves were high before his first play at the collegiate level, but once he was able to get comfortable, he found himself in a groove. He made note that he and Edwards help each other despite competing for the starting job.

“We’re not ourselves without each other,” said Brosmer.

On the receiving end of four of those passes was redshirt freshman wide receiver Charles Briscoe. The young wideout led the team with 71 receiving yards on the day. Other contributions in the passing game came from sophomore wide reciever Brian Espanet, and senior wide receiver Malik Love. The top two wideouts ended their day with 30 and 38 yards respectively. The longest pass play of the day was a 42-yard throw down the sideline from Edwards to redshirt freshman running back Dylan Laube.

Coach Santos believes he has the personnel to be able to take big chances on the offensive side of the ball and put his team in a position to make big plays. He specifically mentioned Laube – who is listed as a running back – and his ability to be able to split out wide as a receiver; just as he did on his 42-yard reception on Saturday.

Sophomore running back Carlos Washington set the pace on the ground for both sides. Washington ended his day with 107 rushing yards on 18 attempts. The sophomore also scored the lone New Hampshire touchdown with 6:52 remaining in the fourth. This 19-yard run gave the Wildcats a 10-6 lead. However, Washington did have one blemish on the day. With 1:56 remaining in the contest, Washington had a costly fumble at the Wildcat goal-line which would be recovered in the end zone by Holy Cross to put the Crusaders ahead 13-10. UNH wouldn’t have enough time to mount a comeback.

Santos had positive words for his running back, saying that Washington gives his team a chance to have a home run threat every time he touches the ball. As for the fumble that cost UNH the game, Santos is ready to move forward and improve upon it.

“That was a very tough moment for [Washington] and our team. The great thing is that he responded well yesterday, and he practiced hard. We have that growth mindset that mistakes happen for a reason.”

While both offenses stalled for much of the game, the Wildcats defense proved to be a strength of the club. Coach Santos had nothing but positives to take away from his defense this week. He highlighted the performances of sophomore safety Pop Bush, sophomore defensive tackle Niko Kvietkus, junior defensive tackle Elijah Kania, and senior linebacker Cameron Brusko. These four players combined for 26 tackles, eight tackles for loss, and two sacks.

Brusko – who made his first career start last week – made the most of his opportunity.

“[Brusko] has got a high football IQ,” said Santos. “He’s an instinctual player. He wanted to take advantage of the moment and he really flourished.”

Brosmer will get the start when the Wildcats head to Miami to take on Florida International University.

“We still have the utmost confidence in Bret, he did some really good things extending plays with his legs. We felt that Max gave us a spark so we’re giving him the nod,” said Santos.

When asked about the preparation going into a game as a starter as opposed to the backup, Brosmer explained how he prepares the same way for every game, and nothing will change in that aspect.

“We have to have the same winning mindset going into every game.”

Coach Santos made it clear that he liked Brosmer’s calm demeanor at Holy Cross. The freshman agreed that keeping a level head helps his game.

UNH and FIU will kick-off at 7:00 p.m. on Saturday from Riccardo Silva Stadium in Miami, Florida.