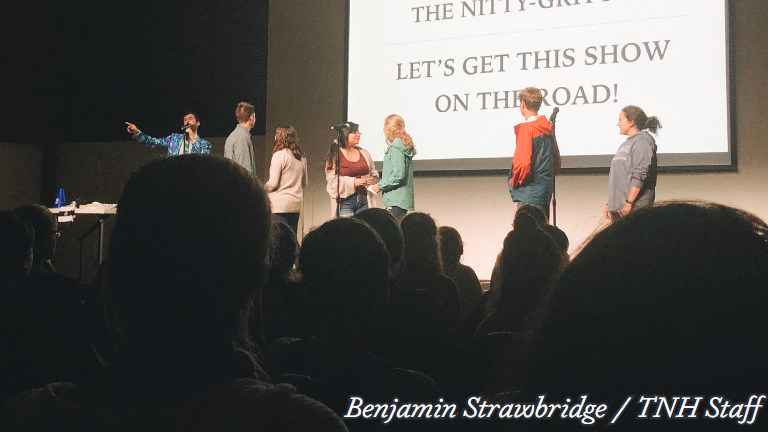 Regardless of whether they won a prize or not, attendees to Scott Rogowsky’s HQ Trivia Night at the Memorial Union Strafford Room on Saturday, Sept. 7, found themselves walking away with smiles following an intense and comedic battle of wits.

The 9 p.m. event saw 18 students across different grades and majors competing in a live-action rendition of the popular HQ Trivia app, a live trivia game for mobile devices where contestants take on sets of increasingly difficult questions for the chance to win cash prizes. Other than the substitution of cash prizes for UNH- and Rogowsky-branded merchandise (with gift cards for Regal Cinemas and Buffalo Wild Wings standing in as the grand prizes), the Campus Activities Board (CAB) hosted-show performed nearly identical to its source.

The game consisted of three rounds each featuring three teams of two students randomly selected from the audience using tickets scattered under attendees’ seats. Each team took turns answering a series of questions based on movies, sports, music and other parts of pop culture, with each question becoming more obscure and difficult as the round progressed. Each round ended with only one student remaining, with the three finalists from the three rounds competing in one final matchup for the gift cards, as well as a signed baseball card from Rogowsky and a choice of one of the lower-tier prizes.

In between the rounds, Rogowsky littered the show with showcases of his past work with clients such as Playboy – where he most notably produced a series of videos where he read humorously inappropriate books aboard a subway – alongside original stand-up bits and stories of his time at HQ Trivia, where he served as a primary host of the app from 2017 to April of this year.

While he is best remembered for his time at HQ Trivia, Rogowsky’s comedy career actually began in 2007 at Johns Hopkins University in Baltimore, Maryland, with a two-credit course called “Stand-up Comedy and Society.”

“The final project was doing five minutes of material onstage in front of an audience, much like this,” Rogowsky told The New Hampshire following the show. “Like, 300 people showed up on my first time ever doing stand-up, and I actually did okay, well enough that people came up to me and said, ‘You should be doing this more, you should make this a career!’”

Although he initially considered his debut a “fluke” and did not plan on pursuing stand-up comedy while at college, he ultimately “caught the bug” and continued his act through college and into larger venues. Despite his appearance at bigger venues across the country and the wide age range of HQ Trivia, however, Rogowsky said performing at colleges like UNH represent a special opportunity to connect with previously-established fans of the app who might have encountered it in high school or in their earlier college years, leading him to call performances like Saturday’s show a “nostalgic act.”

Participants and viewers rewarded the show and its host with similar praises in return, such as sophomore civil engineering major Seamus Quinn, who won the night’s grand prizes.

“I actually was just in the MUB looking at stuff to do and just happened to find this,” he said. “I’ve been playing HQ for a while and I figured I couldn’t miss the chance to meet Scott in person.”

Quinn added that it was “pretty cool” to meet the host in person and “even cooler” to win.

“I think this event is important because at a school like UNH, we don’t get as many big names coming here like bigger state schools,” senior marketing and communications major Payton Taylor, a member of CAB, said prior to the show. “So to have a name here that a lot of people recognize and see the poster and get excited about it is something we’re happy as an org to provide to the student body because we just try to get as many exciting people here as we can for UNH students to meet being so far away from big spots like New York and California.”

The “different dynamic” and positive reception toward that “test run” college show encouraged Rogowsky to take the show on the road, a gig he has hosted for nearly two years now. More HQ college shows are expected to run through the end of September, as well as potential appearances in major cities like New York and New Orleans down the road.

Above all, however, Rogowsky stressed that the most rewarding part of the experience, even more so than the prizes he gave out on Saturday, was – and continues to be – the chance to interact with his fans and give them a positive experience even in negative times.

“I’m not the kind of person who does a show and skips out of town right out the back door. I like to hang around, take pictures, talk to fans and hearing from them… People are getting to the point where people form relationships around HQ, it made their relationships with their families stronger and their friends,” he said. “When it was the phenomenon that it was… it was an incredible thing that brought people together, and hearing those stories, that’s very rewarding.”

When looking back at those experiences and stories, Rogowsky expressed his gratitude in being more than just, in his words, “the guy behind the phone.”

“You hear about it and you can get a tweet about it, but to hear from someone and someone [says], ‘I was in the hospital having a really hard time and HQ helped me through it.’ Stories like that, wow, [it] blows you away,” he said. “It makes me remember, you know, what an important part of peoples’ lives HQ was at one point and how much they latched onto me as… a friend, a virtual friend through the phone. So, that’s cool, man. I’m glad I was able to have that experience for people.”