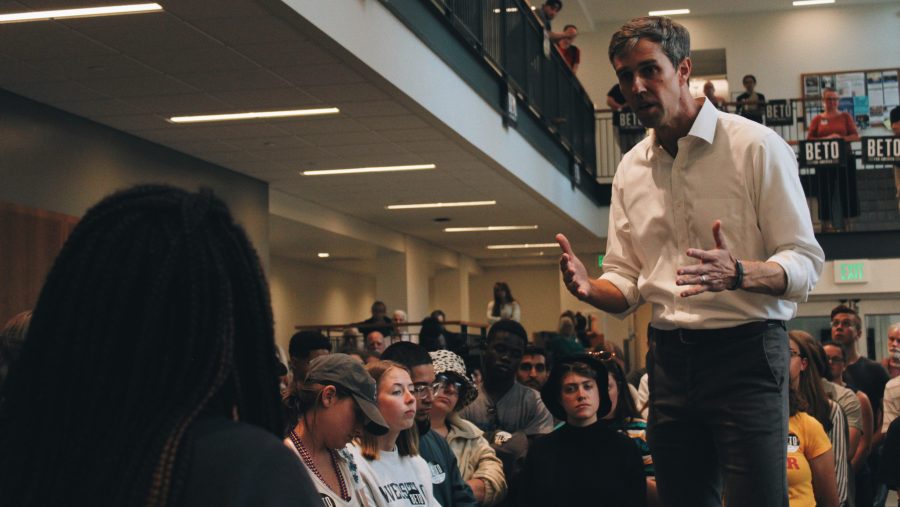 Presidential candidate and former Senate contender Beto O’Rourke (D-TX) took a stand on a host of major issues at his Saturday, Sept. 7 town hall in the Hamilton Smith Hall foyer.

The nearly two-hour event saw O’Rourke perched upon a circular seat for over an hour as he addressed his stances on red-button topics, ranging from climate change and Medicare to gun control and the state of affairs in Washington, as well as taking a variety of questions from a packed crowd of over a hundred University of New Hampshire (UNH) students and local supporters.

During his introductory remarks, O’Rourke lamented about recent surges in gun violence across the country in the wake of mass shootings in Odessa, TX, and Dayton, OH, among many others. O’Rourke told the crowd that roughly 40,000 people reportedly die each year to gun violence, underlining his desire for stronger gun control laws and increased discussion on the subject.

During his gun control segment, the Democratic contestant also disclosed his fear over the safety of younger Americans in public places like schools, such as his eight-year-old son, Henry, who took part in a recent “March for Our Lives” demonstration in El Paso, TX. O’Rourke recalled Henry expressing concern over several participants holding AR-15 assault rifles, guns similar to ones used in recent mass shootings. While O’Rourke at the time told his son not to pay attention to the guns, he conveyed regret on Saturday over not informing him about the dangers of assault rifles and loose gun control laws.

“‘No,’ I should have told Henry, ‘that’s f***ed up that they’re holding these guns…these are instruments of terror that have been used against our fellow Americans, and there’s nothing right about that, and you should be disappointed and angry and freaked out and wanting me to do something about it and not to ignore that problem,’” he recalled.

The candidate laid praise on attendees for their efforts to spread the word on gun violence throughout the local community, such as through local “March for Our Lives” events. He said that, upon his election as president, he would push for universal background checks, stronger red flag laws, bans on the sale of assault weapons, and mandatory gun licensing, among other proposals.

“In fact, if you’re not angry, maybe something’s wrong with you or wrong with us as a country,” the El Paso, TX native suggested.

O’Rourke also dedicated his opening lines to advocating for major reform to standing immigration laws, criticizing national politics for taking “30 years” to improve the lives of immigrants coming into the country with a lack of “a meaningful difference” along the way in the eyes of the candidate.

“…we have 10 million people who are here in this country, who are contributing to our success every single day but who do so without status and live under the constant fear that they [could] be deported back to a country they haven’t been to in decades,” he said. “If they’re young people, if they’re ‘Dreamers,’ they may not have even really known, they may not speak the language, they may not have family. And if we do send them there, and they’re successful again those long odds, they’ll do well for that place and not this place.”

The former representative of Texas’ 16th district also touched upon climate change as he pressed attendees to contribute to national efforts to curtail the earth’s rising temperatures over the next decade, which he attributed to man-made emissions. O’Rourke, in his argument, referred to an oft-cited 2018 United Nations (U.N.) Intergovernmental Panel on Climate Change (IPCC) stressing that nations around the world would have to take “unprecedented” action to keep the planet from warming up by 1.5 degrees Celsius (2.7 degrees Fahrenheit) beyond preindustrial levels in 10 years’ time.

The report, crafted in the aftermath of the 2015 Paris Climate Agreement, added that a “rapid and far-reaching” reconfiguration of human civilization would be necessary to prevent the aforementioned increase, The Washington Post reported in Oct. 2018 shortly after the report’s release.

O’Rourke himself stressed that failure to address climate change would result in long-term damage to “us as a human species, as a civilization, not Democrats or Republicans, not as Americans but just as human beings…”

The candidate addressed concerns over student loan debt as well, telling reporters and The New Hampshire in a post-event press gaggle that he would work to make the first two years of college free, as well as all four years of undergraduate college being debt-free; the four-year proposal would cover tuition, room and board, and books for middle and low-income students.

“And then for those who have already accrued student loan debt, we want to make sure that they can repay that at the lowest possible interest rates; and then if they choose any kind of career in public service…we will make sure that they can have that student loan debt cleared in real-time, not waiting 10 years, which is the current standard of online payments, and not having to cut through a lot of red tape,” O’Rourke said.

Other topics the candidate touched upon included inclusivity, using the 1960 Greensboro Sit-In protests and the 1963 Birmingham protests, as well as their respective aftermaths, as historic motivation for curbing discrimination against minorities; voter suppression; and his aspiration for increased U.S. involvement in global affairs in a role as the “indispensable nation that convenes the other powers of the planet to guarantee that they do their job, but by leading with the moral authority of having set the example here in the United States.”

The subsequent Q&A featured students and community members sharing their stories, explaining how many of the issues brought up at the event affected their lives, and looking for clarity on the details of O’Rourke’s stances. One of those was Omar Ahmed of Boston, who asked the candidate about life expectancy in the U.S. and his desire to urge Washington to do more to improve it.

“It was nice to have him acknowledge that there are areas where the debate can focus more on in general in the U.S.,” Ahmed said. “I think too much of the Democratic debate has focused on costs and not enough is focused on, like, making sure Grandma can feel better at the end of the day, or making sure that, like, we can have every single person live longer in this country…and how we do make that happen.”

Will Simons, the press secretary for O’Rourke’s Granite State campaign operations, told The New Hampshire after the event that he “loved” the turnout to the town hall, stressing that the candidate enjoys interacting with younger supporters and taking the opportunity to “incorporate their voices into his campaign.”

“So many young people right now in this country are leading on so many of these issues, and these issues affect young people disproportionally, whether it’s climate, whether it’s student loan debt, whether it’s gun violence,” Simons said, “and so by being able to come to a campus and talk to students [and] meet them where they are, we’re able to…learn from those student leaders and bring them into the national political conversation.”

O’Rourke dedicated the event to its organizers and attendees, who he praised for taking part despite other recreational events going on that weekend.

“…I’m glad that you picked this event to spend some time with us, and I’m here to listen to you, to learn from you, to share with you what I’ve picked up and learned out on the road and just to have a conversation with everyone,” he said.

The candidate’s appearance marked his first appearance at UNH since March 20 of this year, and the third in a day of crisscrossing the influential swing state. He spoke at the New Hampshire Democratic Party Convention at noon and attended the Indonesian Festival in Somersworth prior to his UNH town hall.