At APO Riff-Off, Music and Suspense Steal the Spotlight 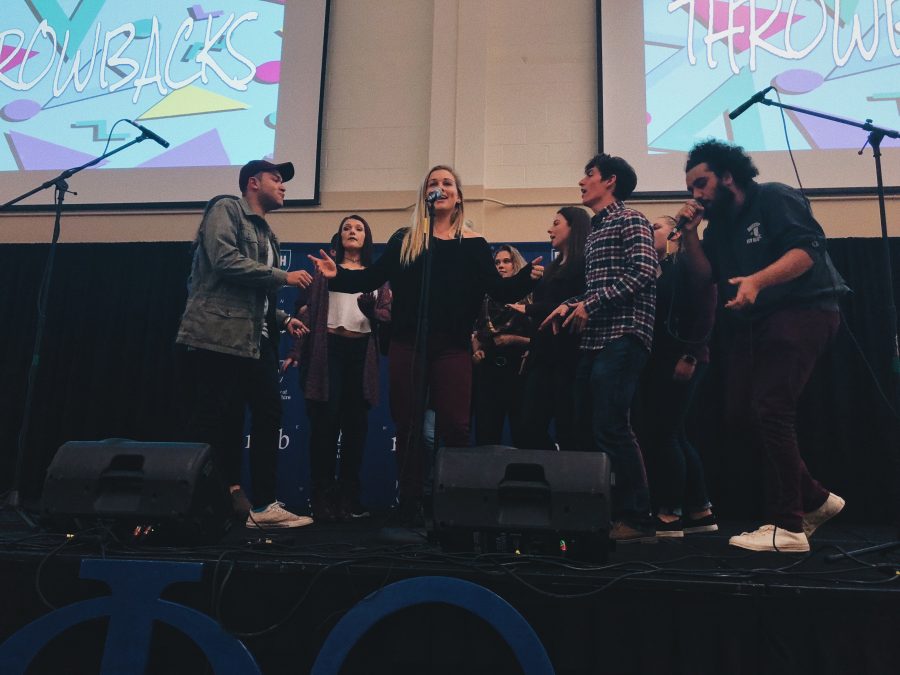 University of New Hampshire co-ed fraternity Alpha Phi Omega (APO) delivered a night of harmony, comedy and suspense with their third Annual Riff-Off, an a cappella competition held in the Memorial Union Granite State Room on Friday, October 12. Ticket sales benefited UNH’s Relay for Life.
The 7 p.m. contest pitted the college’s four biggest a cappella groups -Not Too Sharp (NTS), Off the Clef, the UNH Wildtones, and the New Hampshire Notables -against each other in three musical categories consisting of “love songs,” “booty-shakin’ jams,” and “throwback tunes.” The order of the groups in each round, as well as the categories themselves, were determined at random by members of Improv Anonymous -acting as the event’s ceremonial hosts -through picking names out of a hat.
Love songs kicked off the competition with a cover of Fleetwood Mac’s “Say You Love Me” by Off the Clef followed by the Notables (Andy Grammer’s “Fine by Me”), Wildtones (The Band Perry’s “Better Dig Two”) and NTS (Ed Sheeran’s “Perfect”).
In the second round, the Notables took the lead with Stevie Wonder’s “You Can Feel It All Over,” followed by NTS (Josh Turner’s “Your Man”), the Wildtones (Ellie Goulding’s “Lights”) and Off the Clef (Zedd, Maren Morris, and Grey’s “TheMiddle”).
The event took an unexpected turn when, in the middle of Off the Clef’s second song, the MUB fire alarm system went off, forcing the performers, hosts and audience out of the building and to the nearby Campus Crossing bus stop. During the five minute delay, NTS led an ardent singing of Frank Sinatra’s “Come Fly With Me,” uniting members of each a cappella group and audience members alike.
“I mean, it’s kind of a bummer, you know, because we feel bad for Off the Clef cause they got interrupted by an alarm,” NTS member Jeremiah Friedman said as the group returned to Granite State Room. “They totally deserve the right to have, like, a regular performance.”
In spite of the interruption, Off the Clef received enthusiastic applause and cheers for both of their attempts at the 2018 pop hit.
NTS led the charge in round three with a reprise of their Frank Sinatra medley (“Fly Me To The Moon,” “Come Fly With Me” and “The Way You Look Tonight”), followed by Off the Clef (Earth, Wind and Fire’s “September”) and the Wildtones (Bon Jovi’s “You Give Love a Bad Name”) before wrapping up with the Notables and their cover of The Beatles’ “Here Comes The Sun.”
Between each round, Improv Anonymous, broadcasting their segments on Facebook Live, engaged in a variety of jokes, games and, at the halfway mark, several improv games featuring other members of the troupe, including a fast-paced board game of racing colorful plastic snails held by Improv Anonymous members.
The end of the night saw each group take home an award given out by APO Fundraising Co-Chairs Sarah Bizzotto and Jean Thanjai and APO President Monica Roman who acted as the competition’s judges. The NH Notables took home the first prize as they won “Best Love Song,” with “Best Booty-Shakin’ Jam” going to the UNH Wildtones. The “Best Throwback Tune” award was handed to Off the Clef, while Not Too Sharp won “Best [Group] Overall.” All four groups and the judges united at the end of the night for a full group photo.
Speaking of the making of the Riff-Off, APO Fundraising Co-Chair Bizzotto said that the event benefited from the efforts, information and experiences of past APO fundraising chairs who had worked to hold the contest. She added that the a cappella groups themselves collaborated on the structure and content of the competition, while APO fundraising handled the show’s logistics and funding.
“I think the most rewarding part is pulling off these events and knowing that all of our ticket sales, all of our money raised today… goes toward our Relay For Life team,” Bizzotto said. “So, that’s kind of the end goal here, just raising as much money as we can to help battle cancer, so that just feels really great.”
A cappella group members, like sophomore communications and journalism major Elizabeth Henry, also reacted positively to the event.
“I love this event; we performed at this event last year, and it’s a great event for all the a cappella groups to come together and sing,” the NH Notables member said, adding that meeting new friends in both the Notables and other groups has been the most rewarding part of her musical experience.