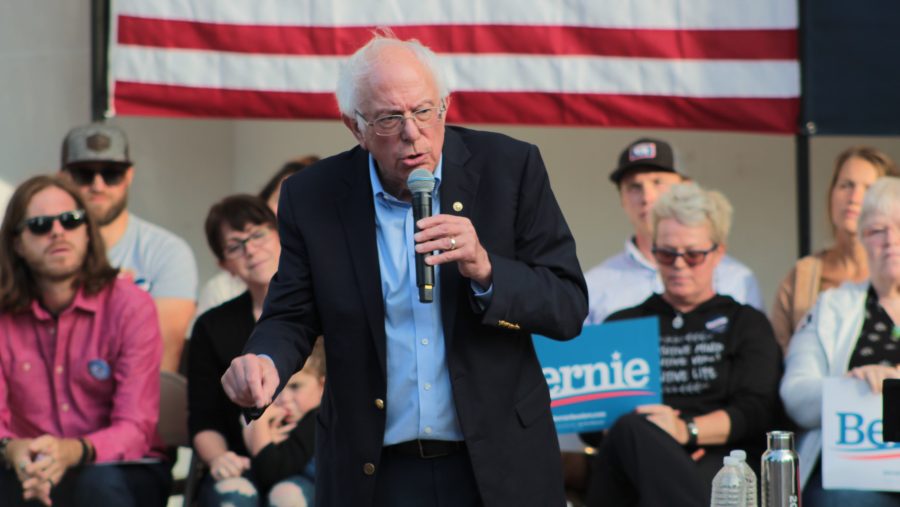 Although the hour-long rally showcased Sanders’ familiar views on issues such as Medicare, wages and guns, it also gave him a chance to explain the broader message of his campaign, “Us, Not Me.” Sanders said the slogan aims to stress how his campaign strives to receive as much of its support from individuals and smaller donors nationwide as possible, and bringing different peoples together as a result.

“It says that our vision of what human life is about is not the same vision that Donald Trump and his friends have; their vision is that you lie, you cheat, you steal, you step on everybody you can and you make a lot of money,” Sanders said. “…our vision is based in the belief that we are all in this together, that my family has to worry about your family, that your family worries about my family, that we make sure that nobody is left behind, nobody slips through the cracks…”

The senator highlighted his push for increased wages and better pay for workers as a primary way to fulfill that promise. Specifically, Sanders advocated for a national minimum wage of $15/hour, promoted equal pay for equal work regardless of gender, and criticized the top “one percent” for its alleged $21 trillion increase in personal wealth while supposedly leaving nearly half of American workers living “paycheck to paycheck,” a condition he defined as lacking the financial ability to sufficiently obtain and maintain employment, feed one’s family, and affording rent and medical insurance.

Sanders pointed to seven states that have already increased their minimum wage to $15/hour through legislation as a sign of progress; he nevertheless stressed that, as a result of increasing income inequality between these two groups, the upcoming election should inspire voters to have the “courage” to urge Wall Street and major industries to pay more in taxes and higher wages to their workers.

The Vermont politician also listed major changes to Medicare as another way of keeping families financially afloat. In touching upon his proposal for a single-payer “Medicare-for-all” system, he cited growing support for such a system over the last four years due to the high costs associated with the current model. Regarding the current system, Sanders told the crowd that the U.S. spends twice as much as other industrialized nations, or the equivalent of nearly $11,000 for every man, woman and child.

“And after spending all of that money, what we have are 87 million Americans uninsured or underinsured,” he said, “and I want to underline the word ‘underinsured,’ because a lot of politicians, they say, ‘well, you’ve got insurance, so we’re going to insure to you.’ What they forget to say is that your insurance policy will cost you 10, 15, 20 percent of your income; what they will forget to tell you is there will be a three, four, $5,000 deductible; what they forget to tell you is the cost of the prescription drugs you need will be unaffordable for you.”

In the middle of calling the current healthcare system “dysfunctional” and “barbaric,” Sanders recalled a story he had read in a local paper where police officer Zach Owens, who had responded to the Aug. 31 shooting in Odessa, Texas, was wounded while on duty, and where his family, due to financial issues, had to create a GoFundMe page online to raise enough money to pay for his medical bills. The candidate said that approximately 30,000 Americans die each year after failing to go to the doctor’s office due to their inability to pay deductibles on their insurance under the current system.

Sanders used both cases as a means of bolstering his calls for an end to premiums, deductibles and co-payments under his “Medicare-for-all” plan, as well as promising that no American would have to pay more than $200/year for prescription drugs if elected.

The rally also saw Sanders presenting his plans for cancelling student loan debt and making colleges tuition-free, citing inspiration from part of the fallout of the 2008 recession.

On top of those issues, the senator called for “bold” action against climate change, stating that action – including his “comprehensive” legislation to move the nation toward energy efficiency and increased sustainability – must be taken by the global community within the next decade to prevent “irreparable” damage to Earth’s environments.

Sanders also touched upon gun control, where he called for more expansive background checks and an end to gun-show “loopholes” that might evade background checks; and women’s rights, where he supported a woman’s right to choose, opposed government intervention on all levels and called it a “constitutional right.”

“If we stand up to Trump and his friends…who want to divide us up; their political strategy is not complicated,” Sanders said as he concluded his speech. “What they want to do is divide the American people up by the color of our skin or where we were born or our religion or our sexual orientation, they want to slice and dice us up and turn against each other…our view is that we bring the American people together…that we bring our people together around an agenda that speaks to all working people in this country.”

Two sets of speakers preceded Sanders at the Sunday rally; Daniel Pontoh, a community organizer for the New Hampshire branch of the American Civil Liberties Union (ACLU), kicked off the event by revealing how he was inspired to support the senator’s campaign this time around after past experiences in a lifetime of hardships, including an ICE raid of his community in Somersworth, NH, in the early 2000s that caught one of his friends from middle school and deported him back to his home country.

“Just four years ago, before the last New Hampshire presidential primary in 2015, I was not someone who considered myself politically active,” Pontoh said. “As someone who grew up in a working class, Indonesian immigrant community of color, politics have always directly impacted the people I care about, but never has my community felt like we had the power to do something about it. And it was Bernie Sanders’ presidential campaign in 2016 that empowered me to know that when we all rise up, we the people do have the power.”

Pontoh also used his time to call for an end to ICE raids, “concentration camps” at and near the southern U.S. border and more accessible paths to citizenship for immigrants, as well as to endorse Sanders’ “Medicare-for-all” plan.

The latter set of speakers consisted of Ben Cohen and Jerry Greenfield, the co-founders of Ben & Jerry’s Ice Cream who offered ice cream to attendees and currently back Sanders in the primary; the two stressed their company does not endorse any political candidate or party.

Greenfield told the crowd that Sanders marks the first candidate he and Ben have ever endorsed, explaining that they have never seen a candidate like Sanders in their lifetime.

“He is completely unique,” Greenfield said. “…he understands that we need a government and a country that works for all us and just the special interests, the ultra-wealthy, the giant corporations…Bernie is not for sale!”

Cohen, meanwhile, discussed his experiences watching Sanders’ rise through Vermont politics, such as Sanders winning the Burlington mayor’s office from longtime incumbent Gordon Paquette by 10 votes in 1981 and going on to provide “public access” to the town’s waterfront, which Paquette had prepared to sell to local developers for private use, after a series of battles in the state’s courts.

“Before Bernie, Jerry and I used to be the most famous guys from Vermont,” he said to laughter, “so we are so happy and honored to pass that mantle on to Bernie because, you know, ice cream is good; but a President of the United States who truly believes in justice in all its flavors? That is euphoric!”

Like Cohen, Greenfield and Pontoh, attendees to the rally, including former UNH students like graduate student Tracey Nygren of Dover, expressed positive enthusiasm toward Sanders and his platform.

Others, like Lea Wallbaum of Maine, expressed support for different reasons.

“I had to leave school because I couldn’t afford it,” Wallbaum, a former UNH English literature student, told The New Hampshire, “and he really wants to make everyone have access to school and really make school accessible for everyone because I think it’s really important, and he has a lot of views I agree with.”

Beth Widmayer of Wells, Maine, meanwhile, came to the event on Sunday with her husband Martin, a member of the UNH class of 1982.

“…I’m supporting him again because he aligns with me on almost every issue,” Widmayer, who supported Sanders in 2016 prior to his 2020 run, said. “He’s a fighter, he’s seasoned, he has stood up with the working people for a long time…”

When asked for her response to other Democratic candidates adopting chunks of Sanders’ platform to use against him in the upcoming election, Widmayer stressed that the case demonstrates his “visionary thinking” and praised his commitment to his platform despite similar proposals from his plethora of opponents.

“I’m a little less likely to support someone who came to an idea recently, maybe just because they’re running for the office of president,” she said. “I’d rather go with the candidate that has shown me a long, life-long track record of supporting causes that I believe need to be worked for and worked hard for. He’s the guy to do it, no question in my mind.”