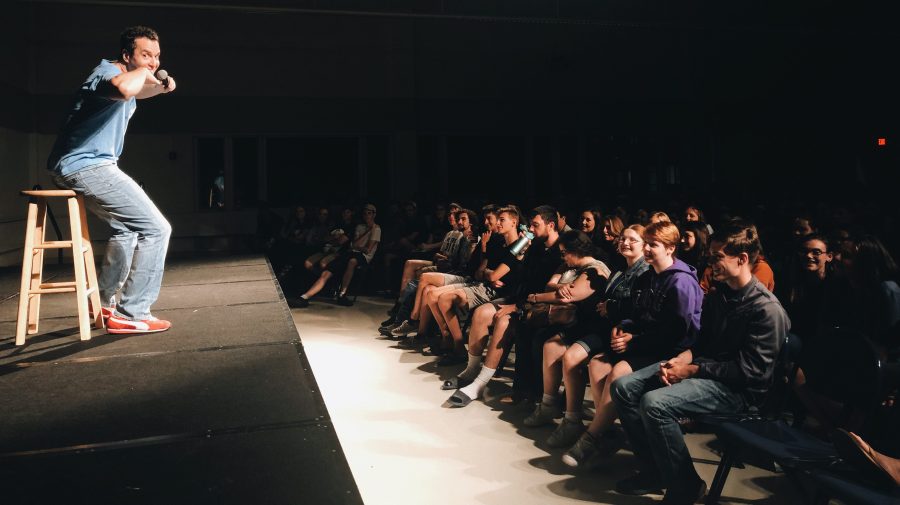 The phrase “all that is old is new again” took on a comedic meaning on Sunday, Aug. 25, as the University of New Hampshire (UNH) welcomed back comedian and longtime campus favorite Eric O’Shea to perform his famous routines for returning students and a new generation of first-year students as this year’s Opening Night Comedian.

The entertainer, best known for his “Songs for Commercials” skit and impersonations of Sesame Street’s Elmo character, provided a packed Memorial Union Granite State Room with two hours’ worth of impressions, comedic noises and satirical stabs at college and life in general. Starting off with the latter following an introduction from MUB Assistant Director for Student Leadership David Zamansky, he invoked chuckles, calling UNH “a little circle road with 300 crosswalks” where “everybody hates each other…” while equating the college’s initials to an exaggerated sigh of dread for the classes ahead.

In between his main acts, O’Shea sprinkled in jabs at modern life, especially when it came to seemingly positive advancements in technology like autocorrecting text.

“How about the talk-text where you talk on the phone or write out the word, it’s not even close to what the hell I just said,” O’Shea grumbled to the audience. “I was working on my website and I’m like, ‘Eric O’Shea is ready to view’; ‘Eric Horsehair fallopian tubes!’”

Not even social media memes were spared in his rantings, especially memes providing crazy instructions designed to trick people into thinking that if they follow them, they would be rewarded. O’Shea recalled one which instructed him to find a certain picture on his phone, “Eat a crayon, take a s*** and slap your sister’s hand… NO! That’s my sister!”

Aside from these smaller diversions, however, one of O’Shea’s main acts centered around his well-known impersonations, such as his famous Elmo impression, which he used to represent his 3-year-old niece.

“She got sick, I drove an hour to my sister’s house, I ran up the stairs, she’s in bed with her little teddy bear, pjs and blanket and I said, ‘Sweetheart, what happened,’” he recalled asking his niece.

“‘I threw up on myself, and then I cried,’” his niece replied through O’Shea’s Elmo voice.

“‘You throwed up on yourself and cried?’”

“‘Every Friday night,’” he told her, resulting in sympathetic laughs from the audience.

O’Shea’s other impressions soon followed, ranging from overzealous newscasters to swallowing food the wrong way through an impersonation of Gollum from “Lord of the Rings”.

But perhaps the most shocking part of the presentation came when he inadvertently showed off a secret talent thanks to an encounter with alcohol.

“If you drink… please don’t drink and watch cartoons; cartoons and alcohol don’t mix. I had a little [whistle] back in the day; turned into my favorite cartoon character from those Christmas claymation cartoons, Hermey the Elf from ‘Rudolph the Red Nosed Reindeer,’ remember little Hermey? When he talked, his mouth went faster than the other words that actually came out of his mouth,” O’Shea said as he proceeded to sound normally while moving his mouth and leaving his teeth still, generating wows and gasps from the audience.

From there, O’Shea proceeded to perform karaoke as his claymation persona after retelling a story of facing such fears at a nightclub, among other scenarios involving the character.

For all the fun and games, however, O’Shea wrapped up the night by retelling some of his more serious personal experiences as a college student, including his distressing first days.

“First of all, I know what you’re going through,” he told the crowd. “My first year in college, freshman year… it was terrifying for me… I cried in my first two days; I couldn’t sleep, it was terrifying. Parents divorced three days later – it was terrible.”

O’Shea said that all changed thanks to a chance encounter with another student.

“Kid knocks on the door and he goes, ‘Uh, hey, you wanna come down to Milwaukee County Stadium…they’re going to be filming a baseball movie,’” O’Shea recalled. “And I said, ‘No, man, I’m not in the mood to meet people.’ And he said, ‘Come on,’ so I went. Director’s a cherry-picker; thousands of people for extras, and he goes, ‘I want you and… you.’ There I am, my hair parted on the side… and I tell you this story not to be like, ‘Hey, I was in a movie,’ because every time I watch the movie “Major League,” I can see myself for four, five, six seconds, and it’s really exciting, and my point is to get out and try something. Don’t be afraid and don’t make the same mistake I made because it’s a very different generation (today).”

O’Shea also offered words of wisdom and advice to UNH’s newest Wildcats as he listed three steps to succeeding in college and beyond: trusting one’s instincts, embracing positivity and helping others who cannot help themselves.

“We have one life, one,” he said. “And I don’t know if you know this, but there’s billions of people trying to do this crap before you, there’s going to be billions of people after when you’re long gone, but you know what? This is your time. I believe in you guys, I am proud of you guys, I love you guys and I am always here for you guys as I’m getting older. I’ll always be there.”

Students attending the event responded positively to O’Shea’s comedy and guidance, such as first-year molecular and cellular biology major Robbie Morin, who heard of the show shortly after seeing comedic magician Ben Seidman as part of his June orientation.

“Part of it was the generous scholarship they offered me, and, I mean, it was interesting,” Morin said when asked why he chose to attend UNH. “I went to see other campuses, like, you know, the whole touring process, and… UNH just felt like home; it’s kind of hard to describe.”

“I thought the people here are really nice,” she said when asked what brought her to the Durham campus. “I really am excited to get involved into music, that’s like one of the biggest things that drew me here.” She added that she is excited about learning new topics and skills at UNH, listing business as an example.

After finishing the night with his signature “Songs for Commercial” skit, in which he envisioned various fitting yet comedically inappropriate tunes for numerous everyday products, O’Shea told The New Hampshire that the energy of the students, combined with the opportunity to begin their year on a positive and encouraging note, drives him to return year after year as UNH’s Opening Night Comedian and beyond.

“As I get older, it means more to me to impact their lives, even for just an hour,” he said, “and I rarely do those three things for rewarding life, but I felt that they really understood it and they appreciated it, and if you can mix a nice message in with laughs, I think that’s pretty good.”