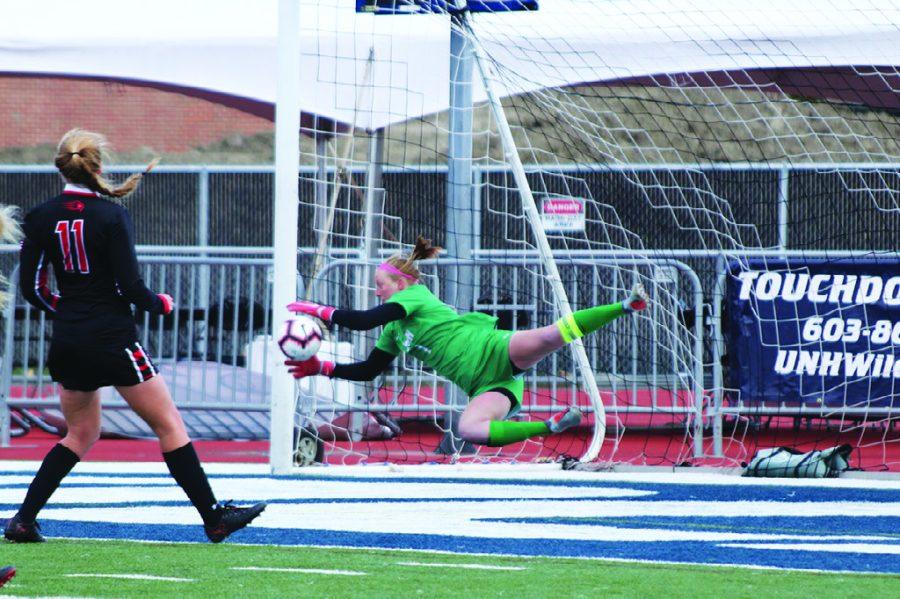 The Wildcats continued America East play Thursday night in New York against the Binghamton Bearcats.
Down 1-0 late in the second half of the game, the “Cats battled back with two late goals securing a 2-1 victory of Binghamton.
The thrilling victory allowed the Wildcats to clinch yet another playoff berth.
It’s business as usual for the Wildcats and Head Coach Steve Welham. UNH has yet to miss the playoffs with Welham as their coach.
The Bearcats took very little time to score, notching a goal just nine minutes into the match.
The score came from Binghamton’s redshirt senior forward Kayla Saager. Unassisted, she cut her way through the ‘Cats defense and tucked a shot past goal tender Mia Neas.
Binghamton’s early advantage didn’t stint New Hampshire’s attack plan, they answered with two big scoring opportunities, however were unable to capitalize on either.
The second half was a constant change of possession, both teams putting on short quick attacks spending no more than a few seconds in the opposing zone at a time.
Trying to get things going and establish control, New Hampshire’s junior forward Liz Lan put up a shot from the end line.
The promising shot curved on net but just snuck over the crossbar unable to even the game.
The real excitement for the ‘Cats came late in minute 87.
Off their second corner kick of the game, New Hampshire’s first-year forward Julie Cane secured the wide shot and floated a pass on net.
Junior forward Kaylan Williams met the ball at the net with no one to beat and tapped it in to even the game at 1-1 with less than three minutes to go.
The Wildcats took their momentum with them into overtime.
Williams fired another shot, one minute into overtime, that ricocheted off the crossbar. Junior forward Ally Reynolds found herself in the perfect position to rip another shot off the rebound and score the winning goal.
The come-from-behind win was the first time this season New Hampshire has been able to win a game that they trailed at half.
Reynolds and Williams recorded their fourth and third goals of the season, respectively.
The Wildcats hosted the Hartford Hawks on Senior Day Sunday to end the weekend.
Despite high spirits and late second half chances the ‘Cats dropped the game 2-0.
New Hampshire started the game off hot with two high chance opportunities.
Reynolds created the first opportunity when she dribbled the ball into the zone and fired a shot on net, but it was saved by Hartford’s tender Maia Perez.
Perez was challenged next by New Hampshire’s Lane when she put a shot toward the net, but the wind pushed it wide.
Like Thursday’s game the ‘Cats found themselves down early after Hartford’s Kaila Lozada scored in minute 16.
The Hawks didn’t put on the breaks offensively after the first goal.
In the 36th minute, the ‘Cats turned the ball over to Hartford’s Ashley Claud who dribbled it in and netted the second goal of the game.
Going with the wind in the second half, the Wildcats had two late chances to get on the scoreboard.
Sophomore midfielder Casey Peterson stole the ball from the Hawks in minute 70 and put a shot on from the 18-yard line, however the shot wasn’t strong enough and goal keeper Perez deflected it away.
Their final opportunities came in minute 80 off of back to back corner kicks, but Hartford defense clogged the box and kept the ball out.
The Wildcats end the regular season with a 7-8-2 overall record and enter the playoffs as the number six seed.
They will go on to play the number three seeded Albany in the America East playoff tournament.