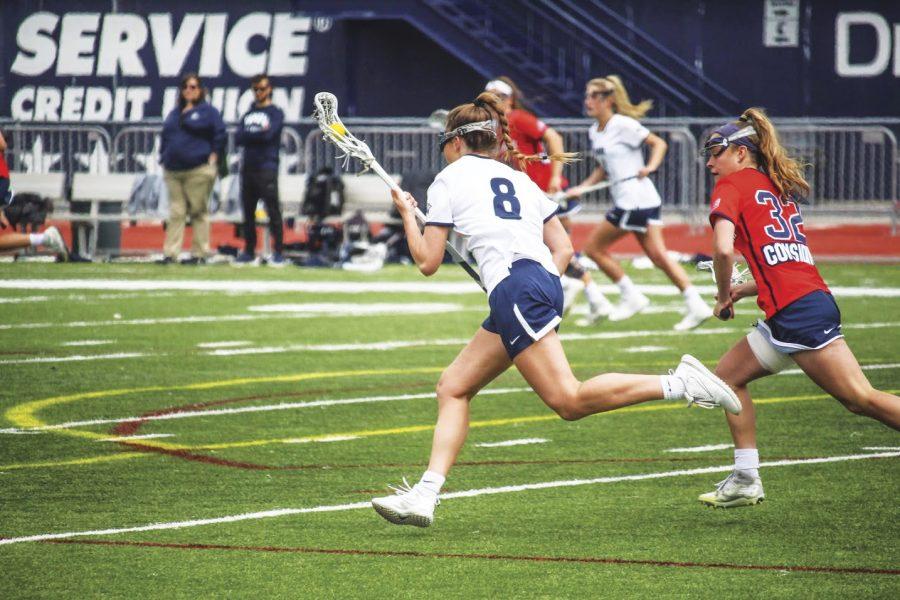 The 2019 senior game was not kind to the UNH Women’s Lacrosse team.

Seniors Jessica Lee, Mickenzie Larivee, Elise Chandler, and Catherine Sexton were recognized and celebrated postgame for everything they have done for the women’s lacrosse program in the past four seasons.

This postgame moment spent with their families might be one of the only parts of April 28, 2019 that they will want to remember.

On the graduating Wildcats’ special Sunday, they were dominated by a score of 17-5 at the hands of an impressive Stony Brook team at Wildcat Stadium.

UNH secured the first draw of the game, but it was all Stony Brook after that, as they outscored the Wildcats 16-0 in the first half.

Senior midfielder Keri McCarthy was the first to get in the scoring column for the Seawolves, getting the assist from senior attacker Sara Moeller just two minutes and ten seconds into the game for her thirteenth goal of the season.

The Stony Brook onslaught continued with seven more goals before the clock hit 20:00 remaining in the first half. There was no coming back from this deficit, as UNH failed to keep possession for any length of time and shots on goal were few and far between.

Standouts for Stony Brook were plentiful, but junior midfielder Ally Kennedy (4g), junior attacker Taryn Ohlmiller (2g, 3a), and sophomore midfielder Siobhan Rafferty (3g, 1a) carried a majority of the load for the Seawolves.

After a lengthy halftime speech by head coach Sarah Albrecht, the Wildcats put forth a much stronger effort in the second half, showing signs of life for the first time.

Junior midfielder Rylee Leonard extended her point streak to a whopping 15 games, as she put UNH’s first goal on the board at 26:11 in the second half.

Larivee realized that this would be her final time playing at Wildcats Stadium, as she added two goals to UNH’s tally and extended her respective goal and point streak to nine games.

The statistics showed a resounding win for Stony Brook as they had the advantage in shots (30-7), draw controls (19-5), ground-balls (12-8), and turnovers (9-14). They also dominated on their free position-shots, scoring five out of eight times off of them. UNH scored on their one free-position shot.

UNH did not do much overall to avenge their losses to Stony Brook in past seasons, but they came out and proved that they at least belong on the same field as the Seawolves by winning the second half 5-1.

Despite ending the season with a demoralizing loss, UNH finished their season strong, ending with a 10-6 overall record and going 5-2 in the America East Conference. This will be the Wildcats fourth year in a row advancing to the America East Championship Tournament.

The Wildcats have also won six of their last nine games, and they hope to carry this momentum into the postseason.

UNH travels to Stony Brook University to face off against the University of Albany in their semifinal game. They lost a 12-11 nail biter to Albany earlier in the year.