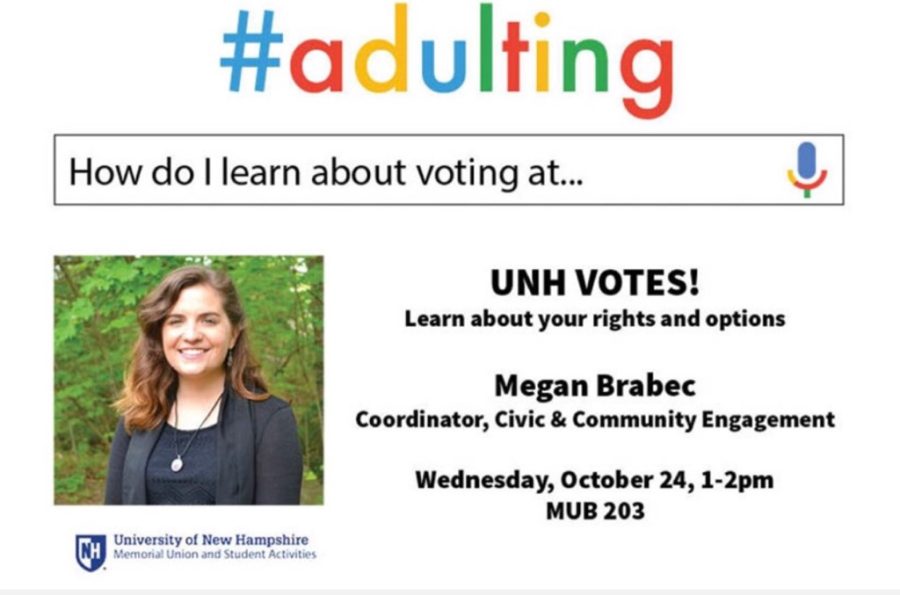 Across social media and every news outlet, one is destined to find at least one article or piece of information either about voting in general, or encouraging them to vote.
In this year’s election, the youth vote has been especially emphasized, and how important it is for younger voters to exercise their right as a growing majority of the American population.
With the midterm election coming up on Nov. 6, the University of New Hampshire (UNH) has been actively working to prepare and encourage students to get to the polls, a topic specifically made the main focus of Megan Brabec’s presentation on voting as part of the Memorial Union Building’s (MUB) #Adulting series, which aims to teach students how to maneuver life as an adult, and acquire real-world skills that they need to know, but are hardly eager to learn.
This is where Barbec, a UNH alumni and now the coordinator of civic and community engagement on campus, comes in. Brabec’s main goal was to break down the concept of voting and inspire confidence in students to do something that can otherwise seem intimidating and confusing.
“To me, it’s not a question of whether students are informed enough, because who is informed? I think that it’s just up to everyone to do the best that they can,” Brabec said. “I don’t think anyone should feel held back from voting because they don’t know enough, I think that they should try to research the candidates, or at the very least research the parties, and just be part of the democracy.”
The #UNHVotes presentation saw Brabec produce a PowerPoint of various facts and statistics one may need to know before election day, including how and where one can register to vote, same day registration, a rundown of the local candidates on the ballot, sample copies of the ballot. She also left the floor open for students’ questions, and encouraged them to talk with her in private one on one after the presentation.
Brabec expressed concern less with who the students vote for, and more that they are educated on the voting process in the first place.
“My office is not here to convince you who to vote for, what issues you should care about, what candidate is strong on what issues; that is not what I’m here for,” she said. “I’m here to just provide information.”
Brabec also emphasized the importance of youth votes because of their increasingly large representation in society, which include college students and young adults as a whole.
“It’s important for everyone to be part of our democracy. If only a certain population votes, they’re more likely to probably vote for people who are similar to them,” Brabec explained. “So, then we’re not getting the richness of the United States; of different ages, genders, races, sexual identities; all of that gets missed if not everyone votes.”
Students in attendance of the panel also agreed on the importance of voting, and felt the presentation allowed them to be more informed on a topic such as voting.
“Personally, I was super uninformed about how to vote in Durham,” senior recreation management and policy major Mary Kate Roukey said. “I’m from New Hampshire, originally, and I did an absentee ballot when I was home last weekend. I know all of my friends were encouraging me to vote in Durham and I had no idea how to go about and do that.”
Senior social work major Jamie Corrone also stressed the importance of voting, and that similar events can be useful and beneficial for everyone.
“Every vote counts,” Corrone said. “We will all be impacted by every decision that’s made.”
Brabec emphasized that the national voting average for the midterm election for college students is approximately 16 percent, while the rate for UNH students was above that average at approximately 17.3 percent.
“Civic engagement is knowing about how our government works, how change is created, and encouraging students to be a part of that change,” Brabec said. “Voting is the bare minimum that you can do as an American citizen to be a part of what our country looks like.”